I joined this forum a little while ago to make sure I knew as much as possible before buying a VF.
A few hours reading answered all of my doubts and I now have an 86 ff. It needed a little work, including a carb strip and clean but, as I consider myself fairly competent I downloaded the manual and last Saturday a friend and I had it all done in about six hours. The only issue was a slight misfire on the left hand side which appears to have been an air leak at the carb rubbers.
The previous owner did a partial refurb and service including a reasonable repaint close to standard colours and new Dunlop Street Smarts but confessed to leaving the carbs untouched. I can understand why some feel nervous about diving into the carbs but have to say I enjoyed the process.

I will be posting in the shed section for advice about a few things I would like to do to my VF but in the meantime I am looking forward to my first ride with the engine running properly. 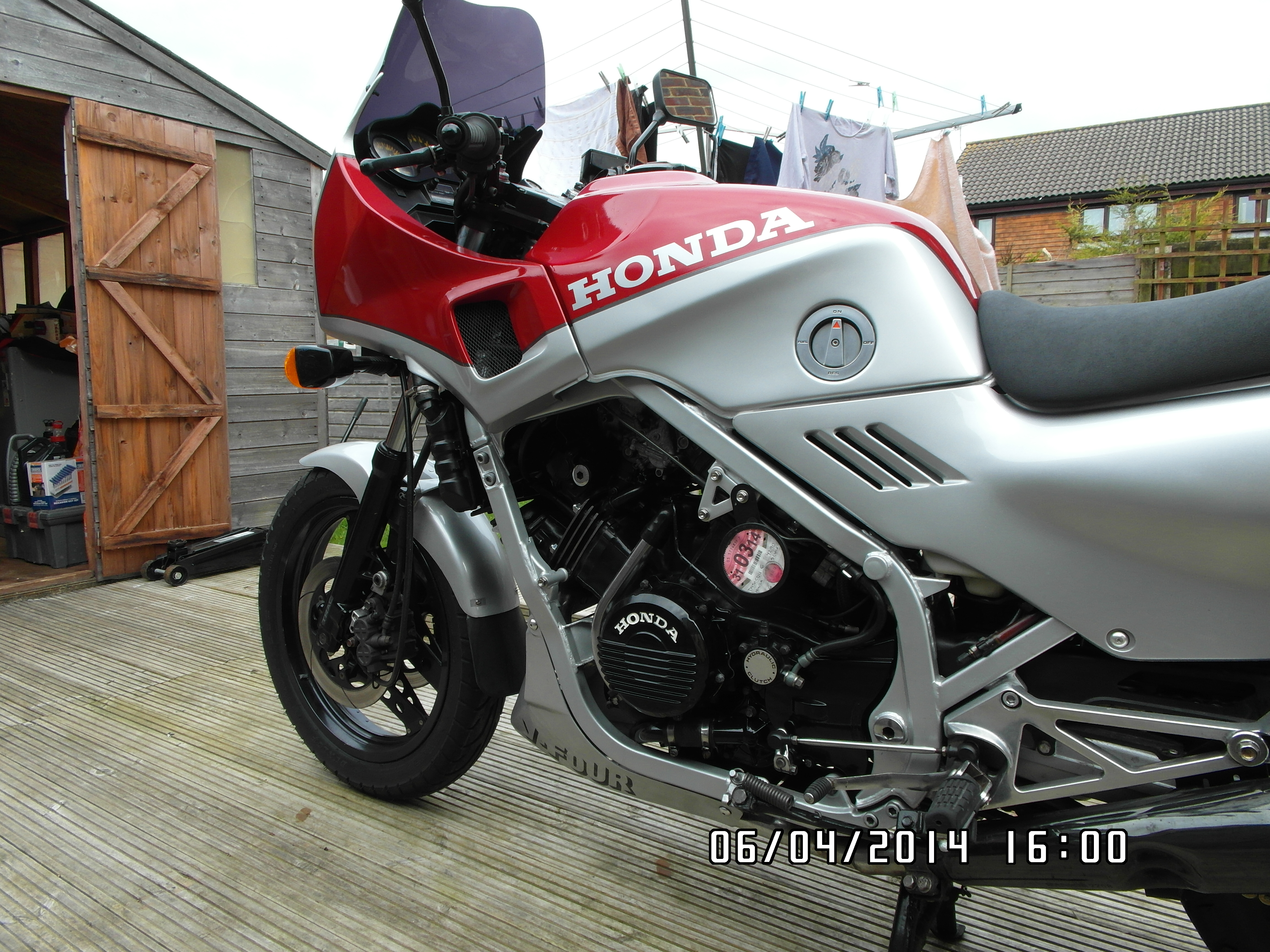 Hi Pete, Thank you and yes it is clean. I’m looking forward to doing some miles on it.
I’m going to Holland in July and if I can get a few miles done and some confidence in it’s reliability then I will change the reg number on the ferry booking and go on the VF. I am used to Honda’s across the frame fours mostly and have to say Honda wasn’t thinking of the home mechanic when they built the VF’s. 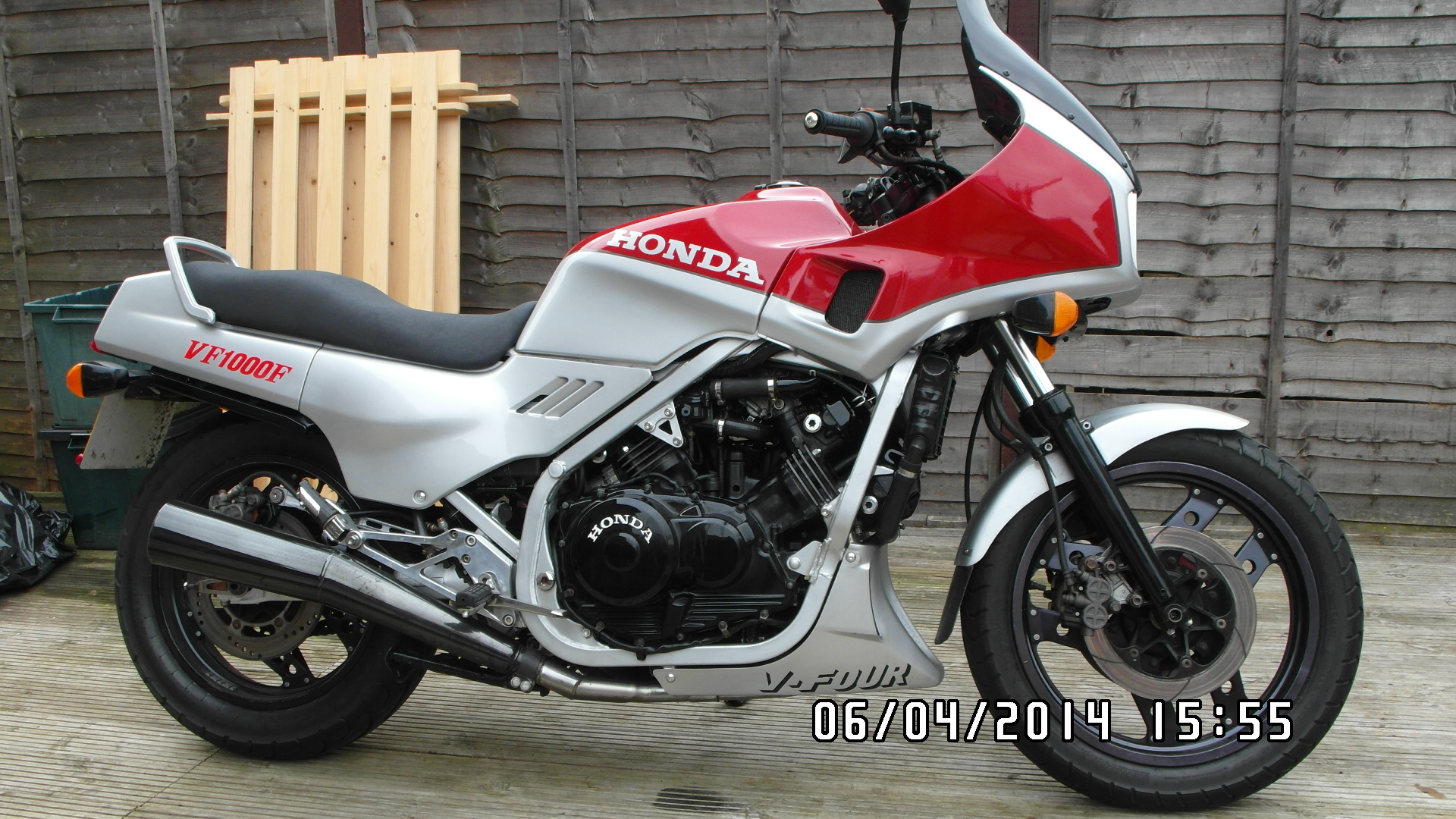 Hi Graham,
you’got the best V4 of the family.Mine is now showing more than 90 000 miles and still clocking up to 130 mph on a daily basis so, if yours has not been abused, it will be reliable!

yep, looks like its got one of crooky’s stainless collectors on too, so no worries about the exhaust system

On a local question - anyone see that nice looking “F” go on ebay UK for £525.00 earlier this week ? I`m interested to know if it had problems or was a reasonable as the previous owner said it was ? London postcode - Fulham ?
Seems amazing to me that these big mile munchers can still be bought for ridiculously low prices.

:o If it is the one on the photographs, it’s very cheap indeed! :’(

hi martin,
there was a lovely blue and silver one one in hampshire, it had bids up to £525 then was withdrawn by the seller, maybe it was advertised else where, but it was easily a grands worth.
there was also a red and silver “not been started for a few years” one from fulham which was bought by a new forum member paul810,

Ahhh Paul 810 must have bought it then. Come on Paul … whats it like ? The sad thing is that many many old bikes are being broken up for spares because they can make loads of money that way. A guy I know specialises in Honda 400/4s and recently got hold of a lovely76 model - looks great and runs well but had a grumble at tickover which may have been gear box. Anyway, he won it for £1,500 and reckons hell easily double his money on parts. On the other hand people like us need spare parts for ours, its just that I wish theyd stick to breaking the knackered old ones.

Hi there marmite and vf pete I picked up the vf today from Fulham nightmare journey took 9 hrs to do 240 miles there and back as for the bike it is all there but was stood up just over 3 years ago it as a badly repaired right engine casing, poor repair on rear tailpiece looks like it went down the road at low speed when I got it back before doing the obvious we stuck a battery on it put fuel in it and tried our luck after 3 attempts it fired up and on all 4 cylinders it sounds very sweet on tick over but when lightly revved I am sure the front cam chain is chattering but the more it runs the quieter it is do you guys no if I change the oil and new filter does this stand a chance of tensioning up and do the tensioners gum up it as done 54.000 miles apart from this everything works will put another posting in parts wanted for bits and these engines sound awesome a real growl to them really happy with the bike and am going to strip and rebuild once engine noise sorted so come on guys your opinions welcomed on timing chain noise

Nice one Paul. Yea, Fulham is an orrible" place to get to. I dont remember any mention of that engine case in the advert ?
Anyway, it sounds like its gone to a delighted customer and thats all that matters. Youll get plenty of technical help from this site if you need it.

radiator corroded but not leaking
collector box rotten where silencers fit on
everything rusty
and most worrying of all the rattle on start up. Have changed oil and filter sounds like cam chain but could be rocker arm or cam but the noise almost disappears once engine is hot < some one point me in the right direction please > would like to rectify fault before removing the engine to rebuild the old girl the rest can be sorted with hard work and some cash but the engine is the heart, does any one know where I can get cam chain guides and tensioners from

If the rattle disappears when hot, it’s definitly a chain noise!

hi paul,
as fred says, if the noise goes off when the bike gets warmed up it will probably be cam chain related, it will be a sort of rubbing/rattling noise rather than a tapping/knocking noise,

If it were me, i would remove the rocker cover and alternator cover, slowly turn the engine anti-clockwise (direction of travel) by hand, watch the cam chain between the cam cogs, if you get slack appearing between the cogs it may be that the slipper/tensioner blade is damaged or not located into the slot at the base of the engine.

also if you remove the cam chain guard which runs over the chain, put 2 finger under the chain and pull upwards,(moderate pressure) if the tensioner is getting week you will feel it slip.

i did get your pm, have sent some pics yesterday morning, let me know if they have’t arrived and ill send them again

Don`t panic Paul, initial reactions can often be dips after the high of the auction win. One step at a time mate. As Pete says, check the cam chain first then go from there. Make a list in priority order.
Do you have anyone locally who knows anything about bikes ? We might be able to get a possie over to Norwich to help out .

Hi marmite have removed rear cylinder cam shafts have noticed that the tensioner appears to be working at the end of the rod as the rod is only shiny at the bottom and this allows the locking plate and spring to rock backwards and forwards thus causing variable tension, the tensioner blade shows slight wear but only about 0.5 mm on the running surface, the strange thing is that it as had cam chains replaced these are the soft link joining variety but the links appear to be wearing down on the side they run against the guides thinking some one as fitted cheap £20 chains and they are crap and already worn out also to bolts that hold the tensioner to head are the wrong ones so now going to remove sump to see what is in there and the other thing so far is that rear cam shaft in the back head as pitting to one lobe and the follower is also pitted so need to replace them as well and that’s only 2 out of the 4 cylinders inspected. DOES ANY ONE KNOW IF MY THEORY WITH THE TENSIONER AND CHAIN ARE LIKELY TO BE CORRECT ANY INFO GREATLY APPRECIATED