Why on earth can’t I stick to doing one thing at a time?
Project number one need to be completed by the end of August and was fairly well along,until that is a cracked rim on the rear of the R meant requisitioning the swing arm rear brake and wheel.
I thought I had a bit of time so decided to redirect Paul’s FE which was languishing in the store.
Not a lot needed I thought so replaced the bent and bashed bits from stock we acquired and had it up and running in no time.
It had been fitted with an FF swingarm at some stage so this was swapped for an FE one.
Bodywork was a bit banged up so a set of panels went off to the paint shop to be refinished in white and blue.That was in december,I finally got them back on friday!!!
Daft ideas like I can do a wheel swap while I’m waiting and why not redo the brakes and fit some new hoses while i’m at it.
The result is time has got away from me BUT at least i’ve made a start.![image|374x500](upload://lJrk26kOzVuJ1INPekPjU1WLKPo.jpeg) ![image|374x500](upload://lvrV3qfkfULVzGIYREpKQ5e994z.jpeg) ![image|374x500](upload://gSwSKJlaK8JVEuSSb0FpUSh8jdx.jpeg)

Gonna try again with the pics 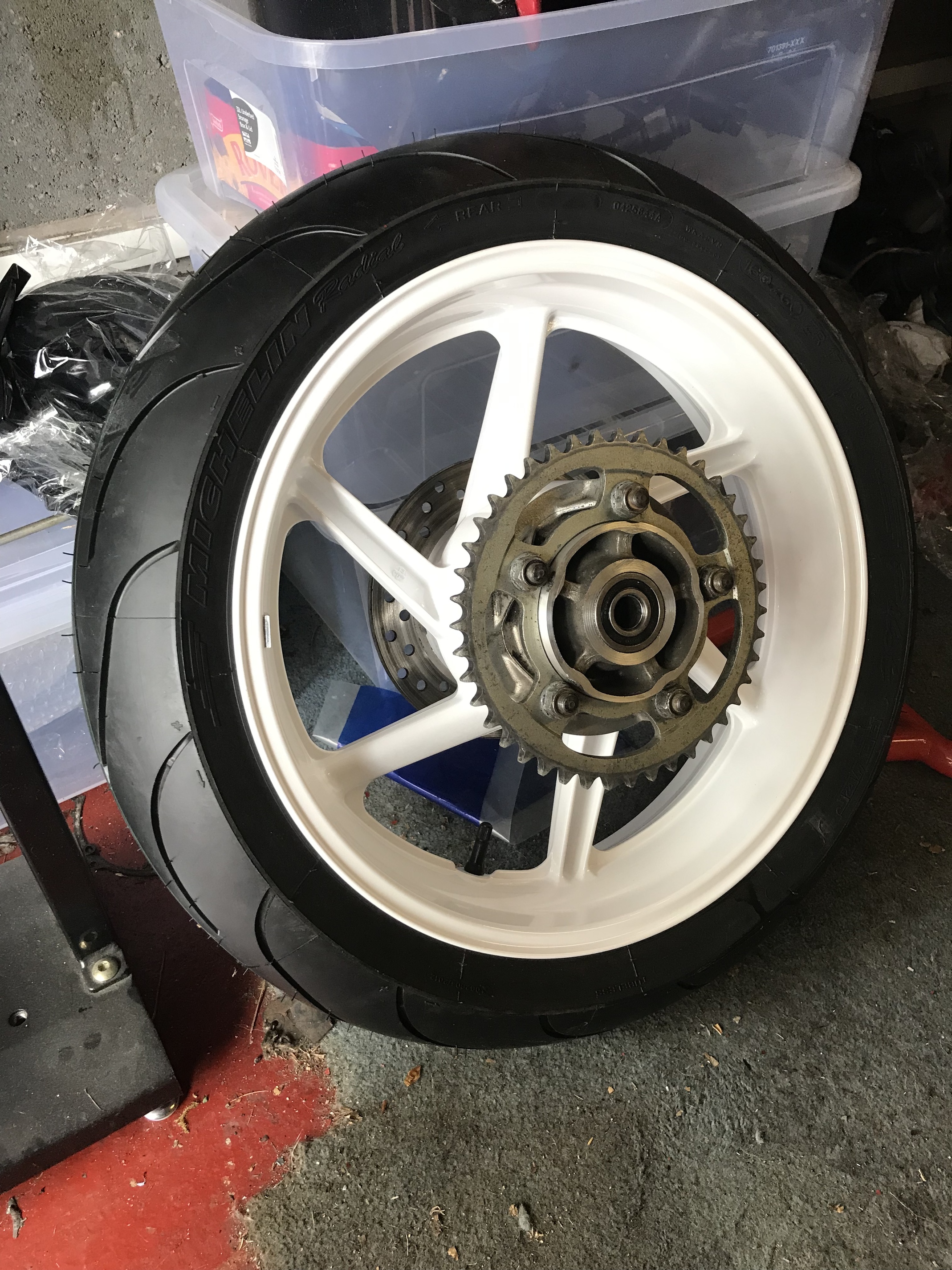 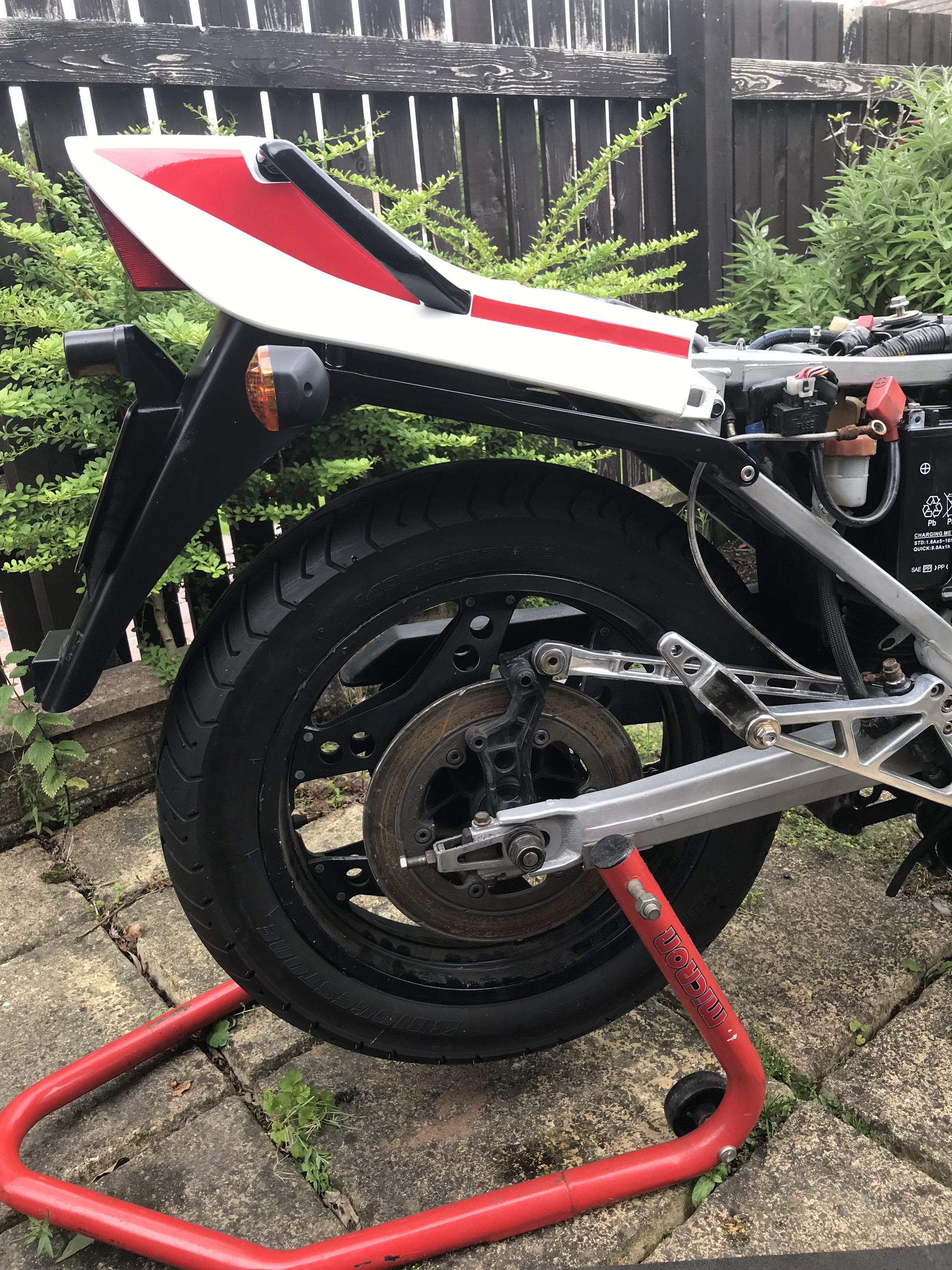 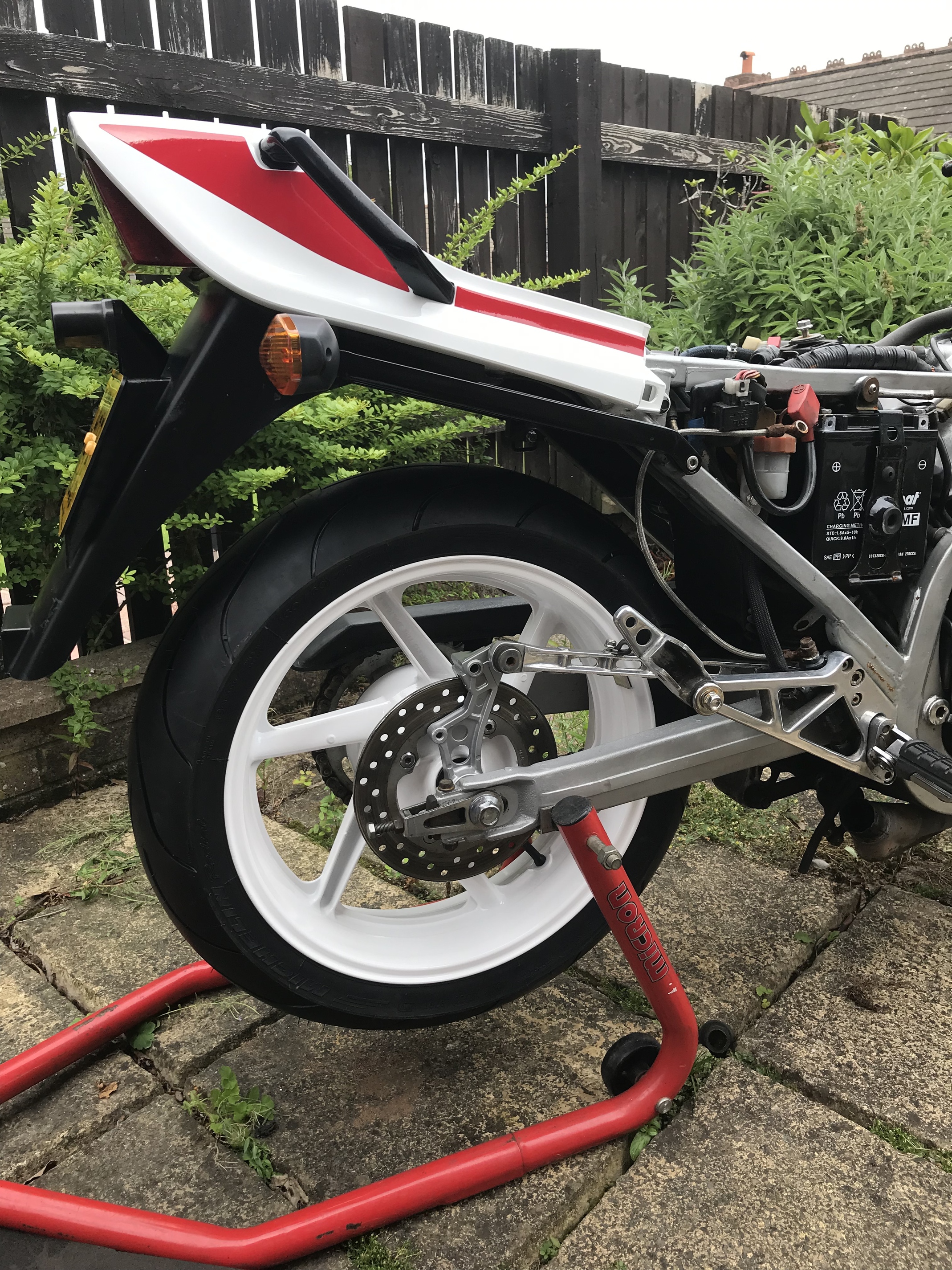 hi bif,
its always the case with projects, even worse when you get other parties involved, everyone else seems to be working from a different calendar, the wheels look awesome in white

Aye, liking the white wheels too.
Watching with interest.

what rear brake carrier are you using that uses the original torque arm? Looking great in white by the way, I was going to do mine in black but white looks awesome!

Thanks guys,in truth it was Mrs Bif who said they should be white!
She shows very little interest in what I do but came up with that.
And she’s right,should set the whole thing off nicely.
That’s a CBR400 Aero caliper bracket Gary,only needed bored out to 20mm for the spindle.

Will it work on the R or is it for the F caliper?

Will only work on the F as you need a fixing point for the torque arm.
OR fit an FE swing arm

Got a bit more done now my holiday is over
Decided to fit. Good FF shock,gives the rear another 30mm lift.
Just the brakes to paint and rebuild and the odd bit of tinkering left 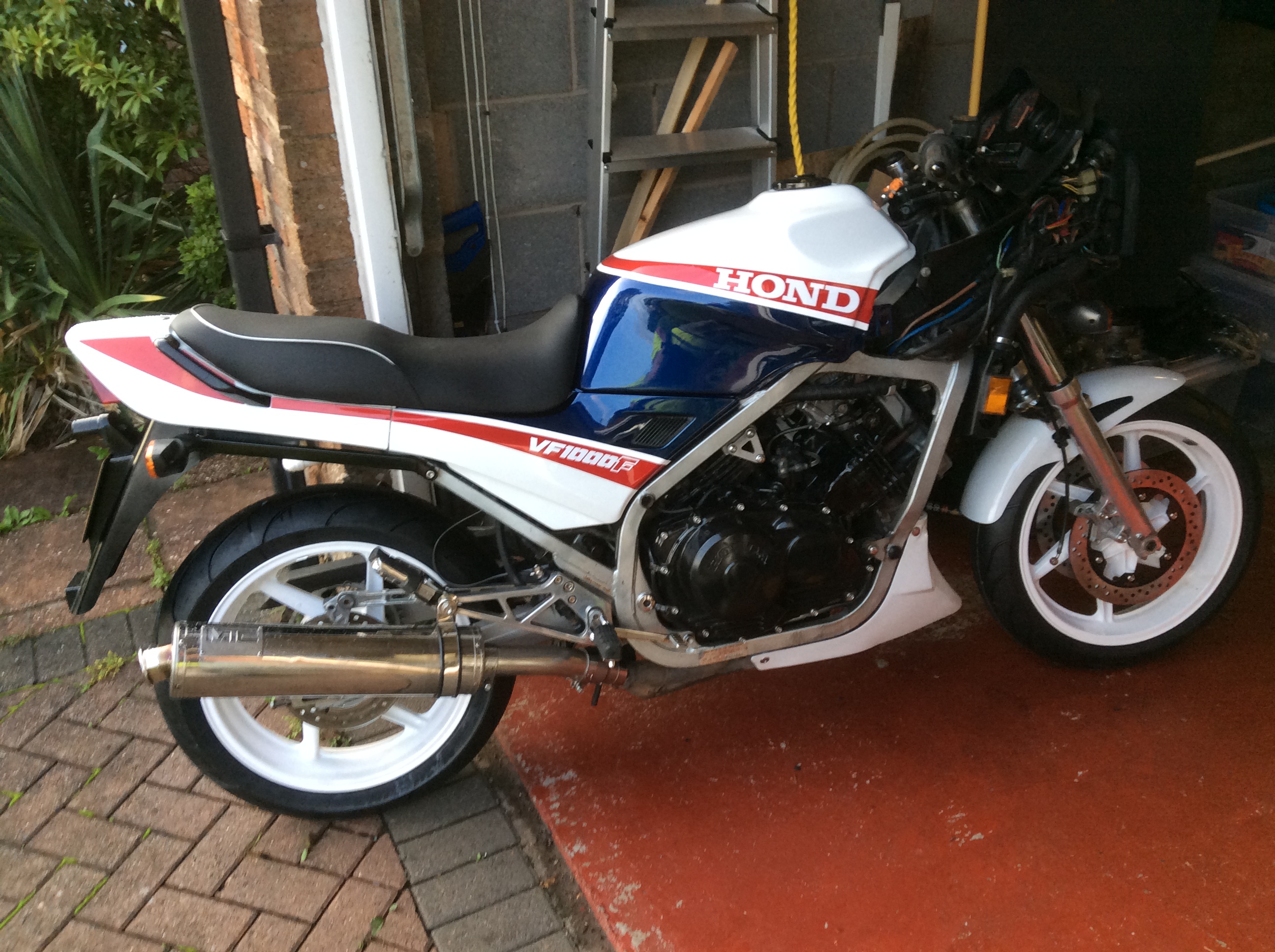 Thanks Pete,it’s amazing the difference splashing some white paint about does.The bike was basically sound to start with but was a proper bitza.An FF swingarm and linkage had the rear end dropped too low,so even sorting that out improved its look.Its running FF carbs so the pipework is a mix of 6mm and 8mm.
The front end is sound tho,Johnboy fitted emulators during his tenure of ownership and new seals/bushes.
Engine wise it always ran fine with as you noted maybe a little tick from the front head.I have new cams here so will fit them if it gets any worse.
Paint work looks good and I’m fairly happy with it but when you start polishing it that’s when you find the little flaws that go on to annoy you.
All in all I will be pleased to see it back on the road where it deserves to be,If I had known the paint was going to be as long I would have done the frame too

Rear caliper refinished and piped up.In future I will use a front right caliper on this mod,the CBR disc is only 5mm so doesn’t need the wider rear that the VF has. 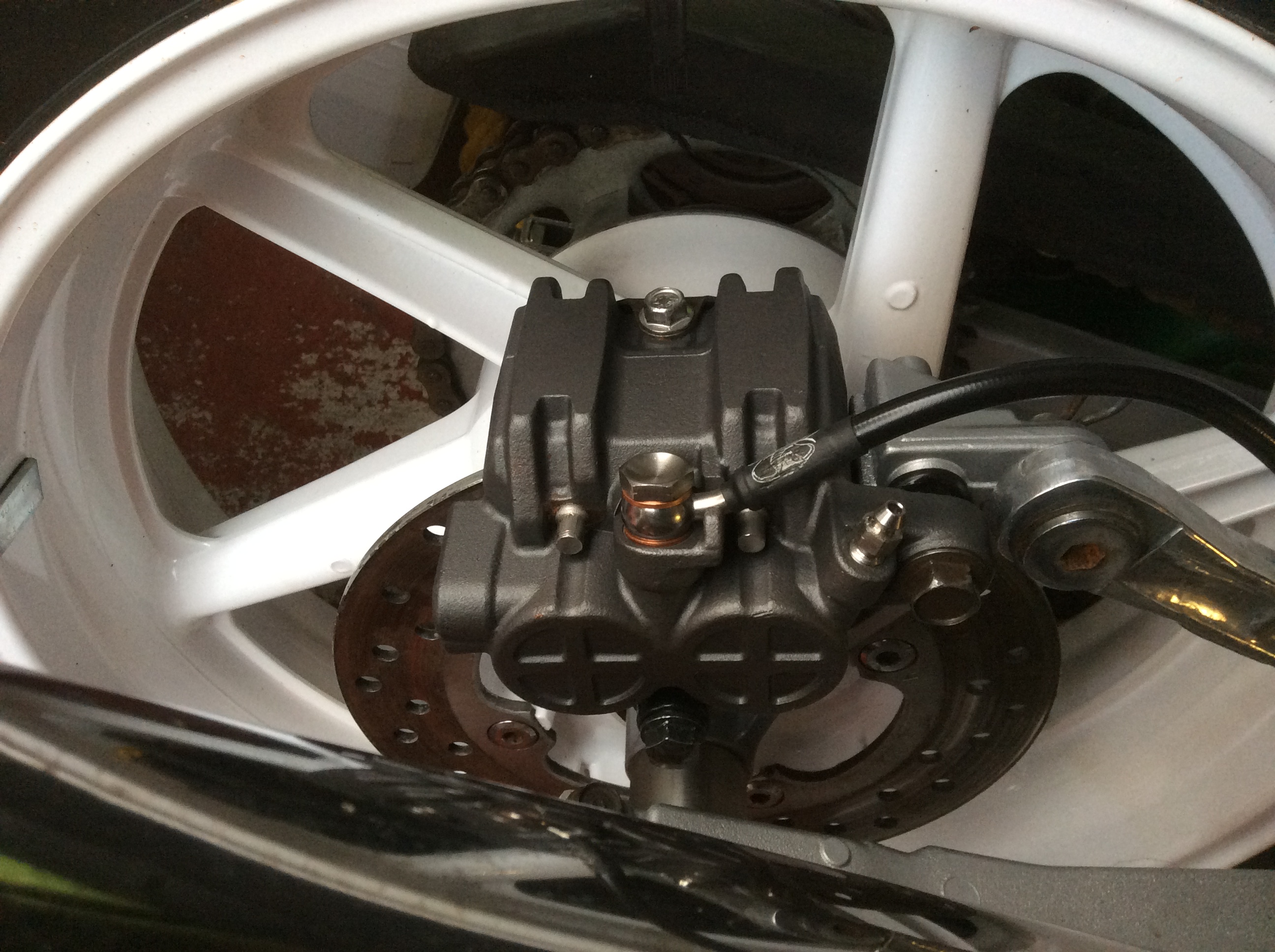 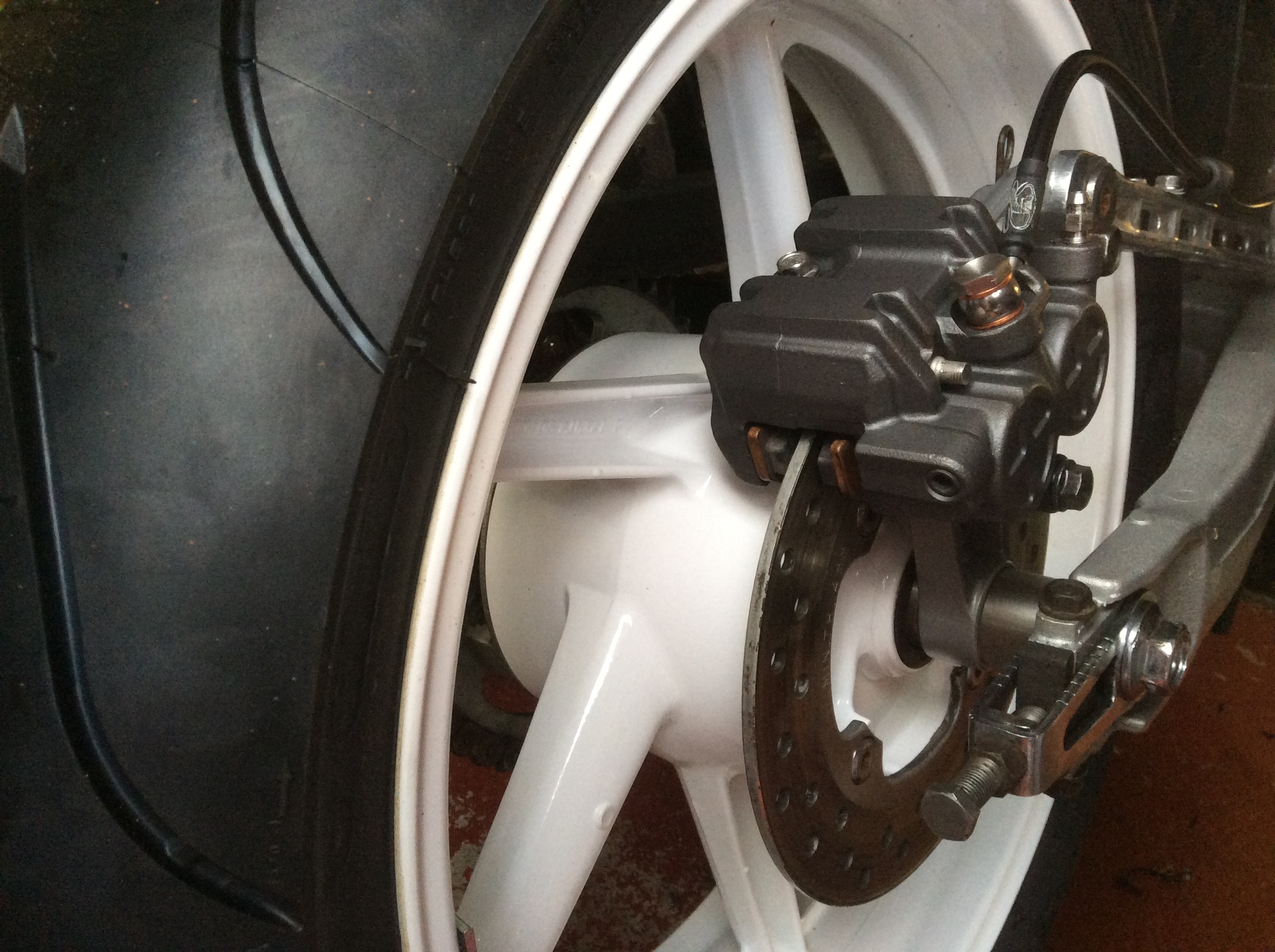 You really have the caliper refurb down to a fine art Bif. As well as your amazing eye for detail.

She looks great! I have just spent the day clearing all the crap out of my garage and transferring it to my long suffering mum’s garage instead. Now, having set out all the engine bits I’m ready to put the liners back in and to rebuild the heads and so on. Bits of the VF have been stuck away all around the house and garage, so it’s a big moment to finally be organised and ready to go. I still have to source some new fork springs, sprockets and chains spark plugs and a battery but most of it is now repaired repainted and ready to go.
Anyway, if I manage to get an end result like yours, I’ll be made up!
Well done!

It’s still a bit of a work in progress in truth,a run out showed up a couple of flaws,thought I had refurbed the rear brake master cylinder,I hadn’t that’s project 1,and the brake seized on.One minced disc later and run two proved the tail can to be choking the bike at about 6K rpm,run three with a free flowing,but a tad too loud,exhaust let the old girl stretch her legs at last.
I am going back to the 4 into 2 system as the 4into1 is touching the belly pan,fitting a new rear disc and pads along with a master cylinder overhaul. 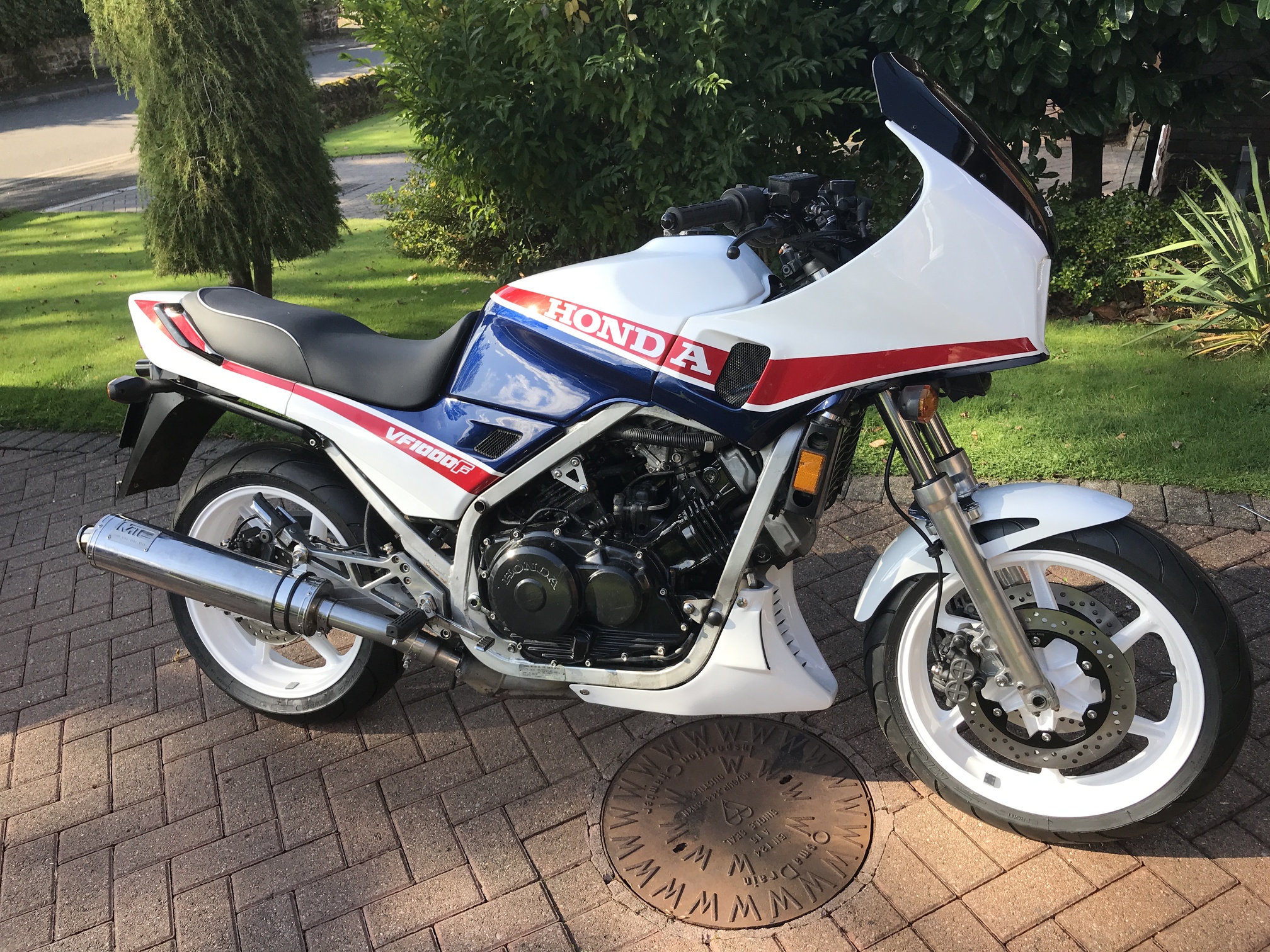 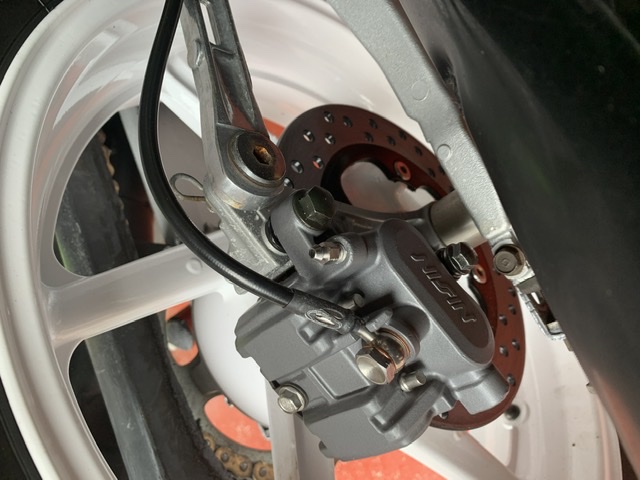 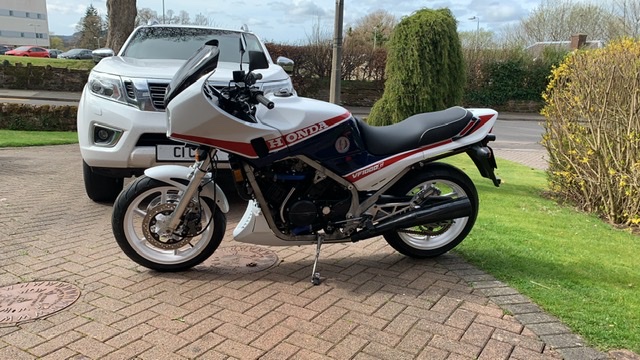 The problem with the rear brake was the caliper running out of room to slide on the pins so I replaced it with a jelly mould 600 caliper,a 400 Aero twin piston brake is the same

Looking good bif, think I prefer the original silences over the 4 into 1