Gooday All,
My starter solenoid was playing up. Replaced 4 pin plug as old one was a bit crappy. Didn’t work. Swapped solenoid for a known good one. Didn’t work. Bought a new one, solenoid only buzzes and doesn’t engage?

Gooday Bif,
Thanks for the suggestions. I did what I now realise is a stupid thing. Because the FE and FF I have here have different wiring colours, I wasn’t convinced that I hadn’t simply reversed the 4 pin plug, Long story shot, ha, but I reversed the plug and got nothing but some mysterious white smoke in wiring above battery before removing plug. I’ll now have to intake the loom in that area to check what damage I have caused. What a fecking Wally!
Will let you know when I have a chance to check

Non starting mystery continues, just tried substituting another complete starter button assembly, and nothing.
One strange clue - with the original starter switch, when I push the button there is just a slight noise from the solenoid as if it is moving, but not throwing in, but the tacho needle flicks up to 5000-6000 rpm, so some sort of feedback somewhere?
my next steps will be, take fuel tank off, and work my way methodically through fault finding, ensuring that clutch diode etc are all working.
Have 3 bikes here, 1 FE, and 2 FFs but each of them has a variation of the colours at the solenoid 4 ping plug, so will have to take my time to check.

Hi Bif,
a very Happy New Year to yourself, family, and forum members! I believe it’s a really big deal in Scotland, or at least that’s what a Scottish mate told me?
I have removed the handlebar starter switch, checked with multimeter, and also tried substituting another switch, no luck. I believe the feedback to the tacho is indicating that I have the connectors in the wrong positions in the 4 pin plug for solenoid.
The clutch diode was burnt out, as a result of me trying the connector the other way around, now replaced. All fuses checked and OK.
My 85 FF has red, black, blue, and green at the 4 pin plug.
Another 85 FF- 200 serial numbers off has Red and white, red, green -red, and yellow red. Looking at this plug from the solenoid mating end, with the cutaway corners uppermost, the colour-positions are Red/white in top LH corner, Red in top RH corner, Yellow and red bottom LH, and Green/red bottom RH spot.
I haven’t altered anything on this second plug-bike, but its a motor and frame, so cant check operation, however I believe this wiring, and plug positions are correct. I think that I have somehow got the wire positions wrong when I fed the new female connectors into the plug socket. I`ll try your suggestions re hotwiring above, and also make sure clutch micro is not the problem.
Thanks for your help, as usual! onwards on the VF journey…

I checked everything I have, yesterday(manuals & wiring diagrams) but then got caught up with New Year celebrations. But as usual Bif is absolutely correct. If you have different colours then someone has messed around with it and you don’t know what has happened. Different colours on the solenoid side of plug, could mean non standard solenoid. Different colours on the other side of the plug means someone has messed with the wiring. If you run a jumper wire to the yellow/red wire at the solenoid straight from the positive side (red) battery, then the solenoid should work. If not, run a jumper wire from the green/red wire at the solenoid straight to the negative side (black) on the battery. if it still does not work then you probably have a crook solenoid. The way you describe the solenoid behaviour suggests that there is a great deal of resistance in the circuit. It could also mean that you have a faulty Neutral switch and/or clutch switch, you can eliminate them by putting jumper wires across the two switches to take them out of the circuit, but be aware that your bike may start in gear. I had a similar problem on another one of my bikes, but it was intermittent, and after many hours of testing and searching I found a spider between the contacts of the starter switch(button). had to strip the switch and clean it out, cleaned the contacts and WD40, haven’t had any trouble since. Do you have wiring diagrams for your bikes? If not let me know and I can E-mail a PDF to you at A3 size. (Much easier to read). There is a rectifier (one way) in the circuit also which could explain both problems because if it is completely open circuit then no power will get through. If it is damaged and causing a high resistance then it could be causing the noises you hear from the solenoid. Are you sure that you have found and fixed all the damage caused by reversing the plug because in your case where there was smoke there was Fire damage to insulation.(only way to get smoke) Of course I am assuming that you have checked all electrical connections to make sure they are secure.
John

Hmmmm, have just burnt out the second clutch diode when swapping wires at solenoid, must have reversed polarity!
My problem is that I can’t use the hints about hotwiring because I can’t be sure of any of the 4 pin plug positions.
Have worked out that the positive in is one of the blades closest to the solenoid coil from ignition, and runs back to v regulator. Just have to work out the correct position of the other 2 control wires? Will make jumper leads for clutch diode connector, and clutch lever micro switch to eliminate those from troubleshooting process.

Don’t move any more connections. Have a look at your second bike’s wiring and copy that in the plug.
I will try to get a photo of the setup from one of my bikes or maybe bif already has one. I will try to find you the easiest way to identify each wire that is not the same colour. Could take a little time. Maybe you will need to PM me your mobile once I have worked it out then I can call you to work through it with you

what colour wires are on the solenoid part of the plug

Ok so looking down onto the solenoid looks like this 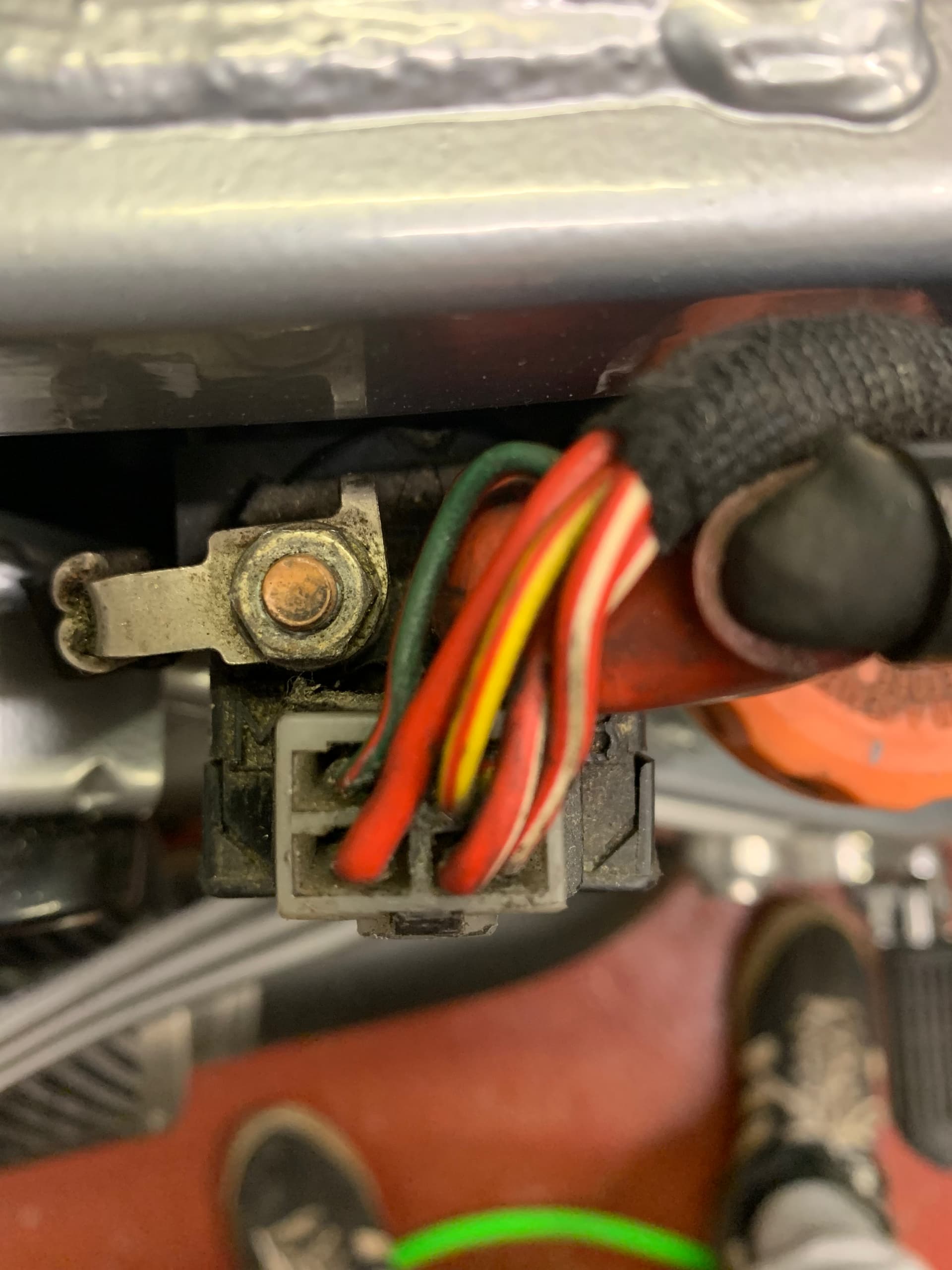 Gooday Bif and Jovimill,
thanks for the help and suggestions so far! 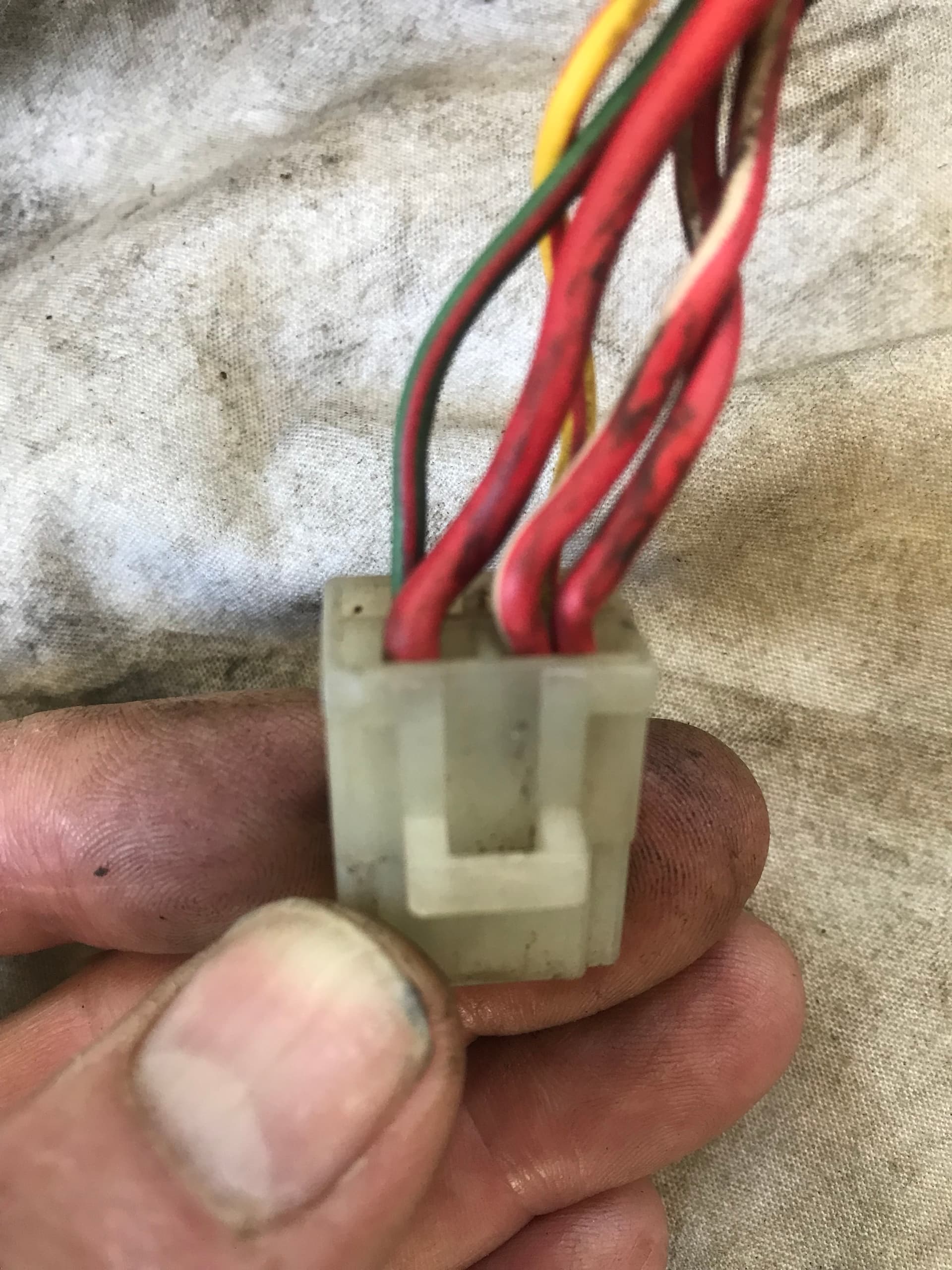 Image with connector is what i just located on a spare wiring harness, things you find when you have a good look! Bif, the wiring on the FE, spare loom, and wiring on another FF appears to be the same as your pic, thanks. 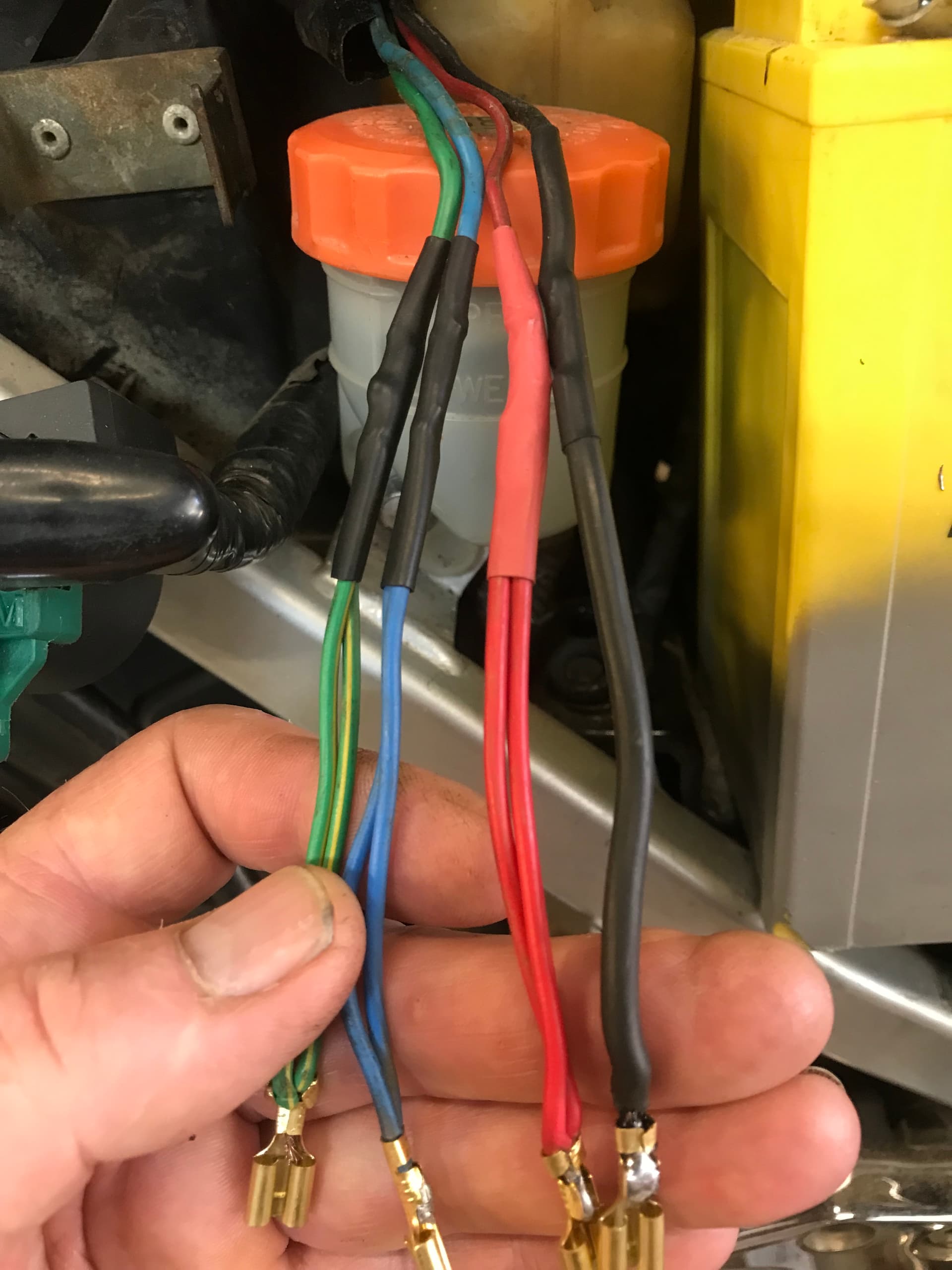 Image without connector is the wiring I have on my problem bike. My manuals, both genuine Honda, and Clymer, show the same colours. I’ve really complicated things by my botched plug and connector replacement.
As it’s now obvious that my wiring is non standard, I’ll unwrap, and trace back to check connections and any splices I find and check continuity. I`m tempted to cut and join correct wiring from the spare harness, but loathe to do that at this stage- will try to find the splices and then replicate the original colours and plug. No luck in finding a good 4 pin Honda type fitting with the alignment notches to match the solenoid. The hunt goes on, thanks for the international support men!

Progress!
I unwrapped the loom behind the rear cyl head area, where the solenoid wiring runs back into the loom. I found that someone had done a good job of joining new wires to the solenoid 4 pin plug- unfortunately they had not replicated the standard Honda wiring colours, FFS!
see pic 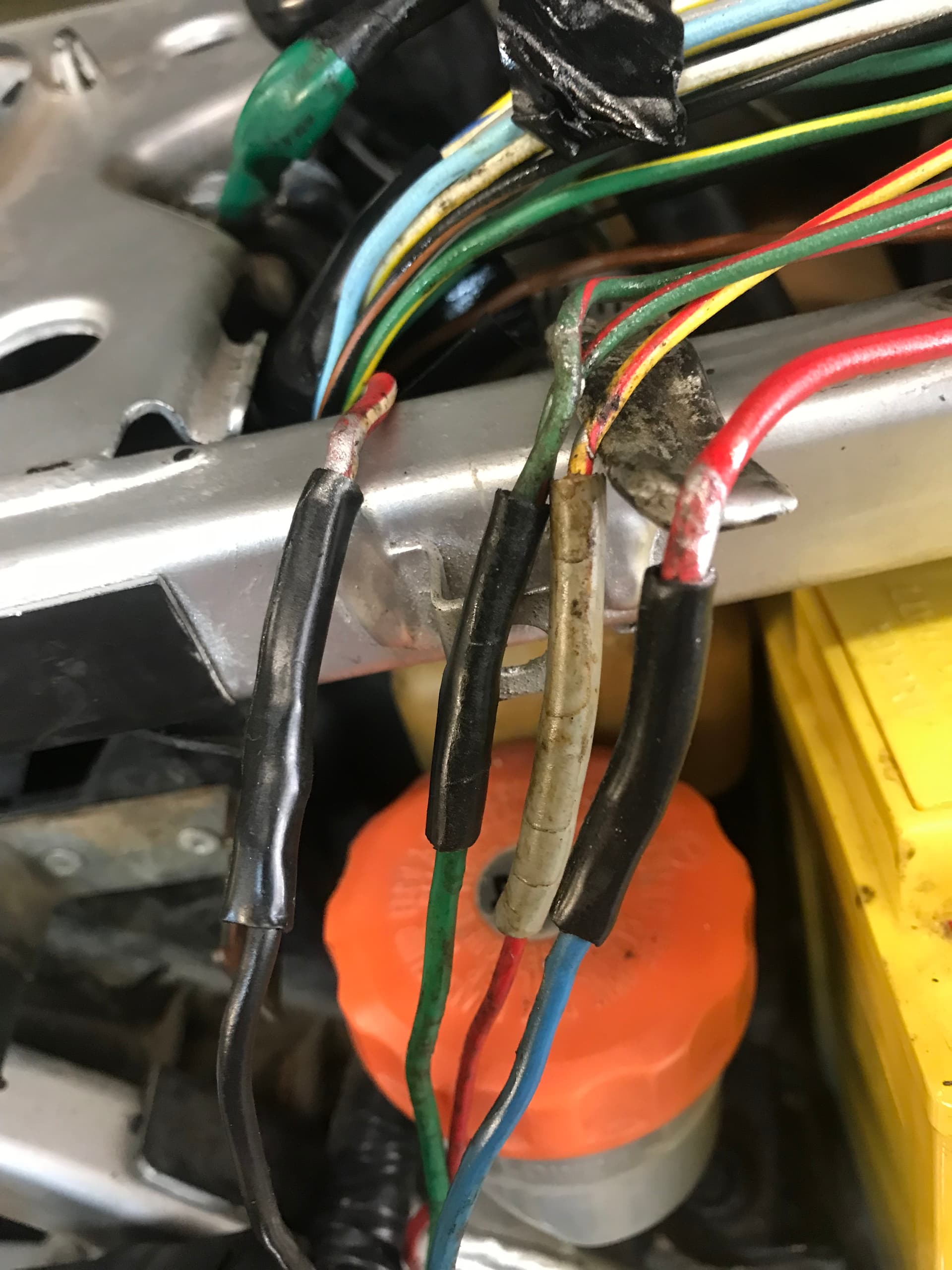 Looking good, hopefully you can sort it out from here. Electrics can be a challenge. Good luck and let us know how you finish up.
John

Just realised I hadn’t updated this post.
I went right back through every component checking with a multi meter for continuity or resistance as per Honda manual. All checked out OK.
Replaced the clutch diode with a Chinese flea bay special, replaced, regulator, and old Motobat battery with a new Li battery which was 1/3 the size, and about 1/4 the weight.
Bike starts better than it ever has, hot or cold, the difference is remarkable.
Only down side is that I had to buy a new charger to suit the Li battery for about 130 bucks, but hopefully the claims about less voltage drop between charges, or rides, and longer life than AGM are true?

Hi Speedy, well done on the electrics, sometimes it is the only way to find the fault. Genuine Honda colours are hard to find in Australian shops. I used to keep every spare or old harness that I could lay my hands on in case I ever had to find a wire/plug to replace anywhere on another bike. Paid off a few times.
Sometimes it is easier to splice an old plug and wires into an existing harness rather than replace a whole new one. Lithium battery should do the job better than the old AGM. They do have less voltage drop, bigger boost when starting, and definitely last longer. Pity about the cost of charger but will it charge other batteries as well? Cheap chargers will ruin normal batteries over time anyway. I just don’t buy the cheap ones anymore and the better ones last longer over time too. Been a bit cold and wet around Canberra to be riding much at the moment, With the weather forecasts I hear you might have to put snow chains on

Almost as bad here in Adelaide at the moment (less the Snow). Good time to work on the bike though to get it ready for summer.
Stay Safe.
John.

Forgot to say do not use the Clymer manual for much and especially for wiring around the starter solenoid because it is wrong, wrong, wrong and even WRONG. Do not know how so called technical people could get it so wrong. Rest of manual is wrong in some places too so always use your genuine manuals.

Thanks John, yes a bit chilly here at the moment, will have thermals on for VJMCC ride on Sunday, if not too wet?
Like you I always keep old wiring, and agree on reusing plugs- the plug to starter solenoid was very dodgy, probably because of the current draw. Replacing that plug was what started the whole chain of events…
Cause I have mounted an oil cooler, I’ll have to look at hanging a soft cover over the bottom radiator to keep it warm whilst riding. Gave it a go a couple of days ago and the needle hardly moved, way too cold.
Yes I learnt about Clymer manuals years ago when attempting to time VF 1000FF after rebuild, absolute shyte! The interesting thing is Honda got it wrong in the very first 1984 manual, Clymer copied that, Honda subsequently published a service update, then reprinted new manuals. I reckon a lot of the dead VFs around with motor in bits at wreckers are cause people couldn’t retime them? or stuffed camshafts…