Hello everyone, My 1984 VF has developed this problem over a good period of time.A short run , say 15 - 20mins and the bike won’t restart, it turns over fine.Leave the bike for 20minutes to cool down( though its not over heating) and it does fire up but only after 4-5 atempts, leave it an hour and it starts easily…I suspect fuel starvation or vapour lock from heat… any one had this little problem before ? Is it possible the fuel pump could be responsible?
The bikes got 48k on the clock and is hopefully taking me back to this years TT on the Isle of Man.

Hi Bud,
You will need to check the things you have mentioned plus some, could be fuel so check to see if your plugs are wet after cranking with no start.if wet then fuel prob fine, Could be hot coils so check for a spark at the plugs when cranking, if no spark then coils or cdi ,fuel pump doesnt usually give that problem I would have thought it would be not working at all and not just when hot but still needs to be checked,clean plugs if its been sat for ages, if this is a new thing it is probs a failure of some component and not a sudden evaporation of fuel.
Mine empties the carbs quickly and is hard to start after a week of standing probably a weak pump as its great if used frequently.
Hope you find its an easy fix.

Hi there,
Thanks a lot for the info on the electrics…I will check them out as you suggest, though the spark plugs have been replaced. I’ll update with hopefully a definite solution.

Hi i have a VF1000FE which was back on the road this year after a long rest in a garage and it had a full service passed its mot and ran like new until it got warm ??? the starter motor would struggle and then a flat battery, no start so had to wait till it cooled and a quick flick of the button and it went most times but had to spend each day on the optimate.

It always had a odd few issues over the years but 99% reliable and i thought i knew the beast well ??

Ok fuel yes but i had the tank cleaned new fuel lines and filter and fuel pump was fine and clean new fuel and air filter and the plugs was clean and all fine until it got warm again.

So next it was the electrical system that need a look at so a FULL system check did fine a corroded reg/rec unit connector which was replaced worked fine the new battery was fine ALL earth points was clean and re cleaned even the one from the battery to the back of the engine.

Also i noticed that the bike would only fire on 2 cylinders some times traced this to a loose connector to the black box in the tail unit.

I also replaced the Ignition Key unit as it was a bit iffy used to just go dead when riding in the past so time for a new one and remove as many faults as possible, so i would check every thing even test all components its cost more time than money so far.

To make the old system have an easy time I fully changed all the bulbs to cob led including all display and warning lights and a new super led head lamp bulb with led side light and its very white and bright and even the led tail light makes a huge impact now.

Whats this got to do with starting when warm ?

Simple the system uses less power and there is more for the starting system when its needed with the issues you mention and there not big batteries for a 1000cc V4.

So the problem is Ignition system ? well there is diode or two under the tank i noticed when checking the wiring & coils and HT leads - then moved to the switch gear the kill switch and starter button was in my focus.

But as i had had 2 starter solenoids before both stuck on, the current was an old secondhand one so i replaced that with one from webmoto and with kill switch on the starter motor turned like a banzi as when cold so i was getting a bit miffed at this point as it seems such a simple problem ???

Then a friend saw this (posted here) and this is where i am looking now !!! "starter cable brakes down when warm ? and i know you cant get them any more. 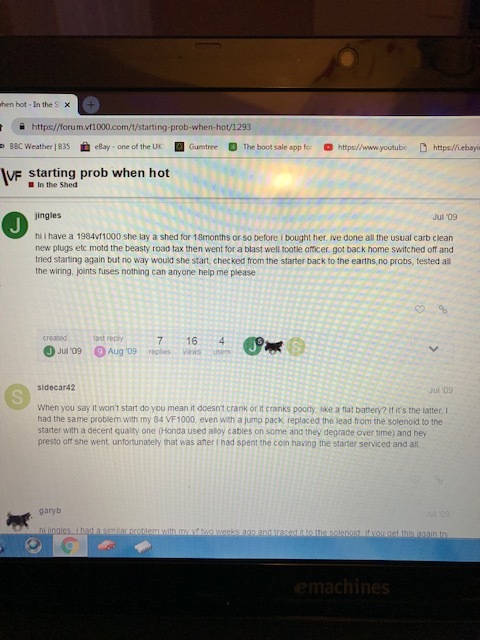 So best of luck and ill keep you posted if this cures the problem as after this its the starter motor ?, so get to know your VF very closely before taking to the IOM it will love you for it and you will the 37.75 miles to, my VF was last there in 1987.

Hi John, the problem you have with the starter not turning over when hot is usually the starter motor itself. It can be serviced as long as it is still working when cold, a new set of brushes and springs perks things up, vfpete was telling me he got a brand new motor from the states. I’m an electrician and would not think the cable degrades to any significant level but can make you a new cable if you want, they come in two different lengths one has terminal on motor near to frame and the other at the back of the motor. PM me your details and I will sort one for you though rubber caps on the end may be a problem. Hi Tom your problem seems to be different, I would look at fuel starvation or sometimes the ignition boxes give problems when hot causing two cylinders not to fire. As with the starter motors the ignition boxes can be repaired as long as they work ok when cold, if you can solder to a reasonable level you need to open black box and resolder all the connections on the board concentrating on the cables attached to board.

Many thanks Garyb, I’ll get that route eleminated as its a good suspect on a 34 year old machine.Bikes now in the shop for other bits to be fixed so hopefully with forum members advice we will get the vf back on song.
Cheers.

My vf used to pack in after 5 miles, the exact distance to work, I’d pull into bike park and it would die and wouldn’t restart. The tell tale sign on mine was the rev counter would also pack in, this meant it was an ignition fault as one side of the ignition drives the rev counter and two cylinders the other side drives the fuel relay and other two cylinders. I started with the cheapest options first, I replaced the fuel relay with a normal car relay wired to come on with the ignition this removes unnecessary load on ignition box and also helps rule out several fuel issues because it comes on with the key you hear the pump pressurise the carbs when you turn key on, this let’s you know if there are any fuel starvation from blocked tank or filter also that pump is running and if it stops then carbs are full. Next I resoldered all connections in ignition box and it worked great after that and all for £3 for a relay and a bit of work. I have also had the ignition pick ups fail giving same sort of problems, test resistance of coils in plug of cable coming out of top of clutch case, no cheap repair for these! Have to be replaced. Good luck and if you need any help let us know. If you’re in UK one of us will be able to do ignition box for you.

Thanks Gary B i was thinking of servicing the motor as a matter of course - so for the price of a service kit may as well give it a bit of TLC.

but agree the cables are fine.

Hi Gary,
I know this is an old post but what fuel relay did you use? I am pretty clueless with electronics so a part number would really help. I like the idea of being able to hear the fuel pump working on ignition.
Thanks
Fry

I used a relay from a car but due to it being from a range rover it will be massively over priced! You will need a bit of electrical ability to fit it though as you can’t use the original connector. I have a few of these relays so if you PM me your address I’ll pre wire it and send it to you as long as it’s in the UK. I’ll add a post on the forum on how to install it.

Talking to bif about these relays and we decided there are a few different ways of doing this.

From personal experience I’ve had a couple of the Honda relays fail on me and when that is accompanied by a dodgy pump you spend a lot of time on the side of the road cursing everyone and everything whilst waiting for the recovery van so I replaced the relay and fitted an after market pump and now have no problems. The relay I use fits in the rubber mounting the original relay did so is very neat and the old plug for the Honda relay is still left in so it can be put back so standard if required.

Hi Gary, they all sound good workable solutions.
My pump hasn’t failed …yet. I was just interested to be able to hear that the pump is working as mine can be difficult to start when warm and this eliminates fuel as a issue, so probably 1 or 2 would work best for me.

Ok, I’ll send you a pre wired relay and put up a post on how to do the different methods and you can choose which to do.

Thankyou you are a gent.

Hi Gary, did you post the “how to”on the relay? I am struggling to find it this morning!

Any problems let me know.