hi all just got back from the Scottish trip with club, thanks to everyone who was there it was a fantastic weekend! had a problem on the last day with bike only firing on 3 cylinders when it went above 4000 rpm decided not to do this job in car park of hotel preferring to spend evening eating and drinking and limped home on 3 cylinders next day. today i stripped out carbs and found as expected the filter feeding the front right cylinder needle valve blocked with brown gunk the other three carbs were in better shape though the two centre bowls had a lot of the same gunk in the bottom of the bowl. does anybody run without these little filters or is that a bad idea and would only cause bigger problems with blocked jets. vf Pete suggested coating the inside of the tank with a two part epoxy coating but the tank does not look that bad when you look inside and when tank was emptied so it could be sprayed the petrol that came out was clean. 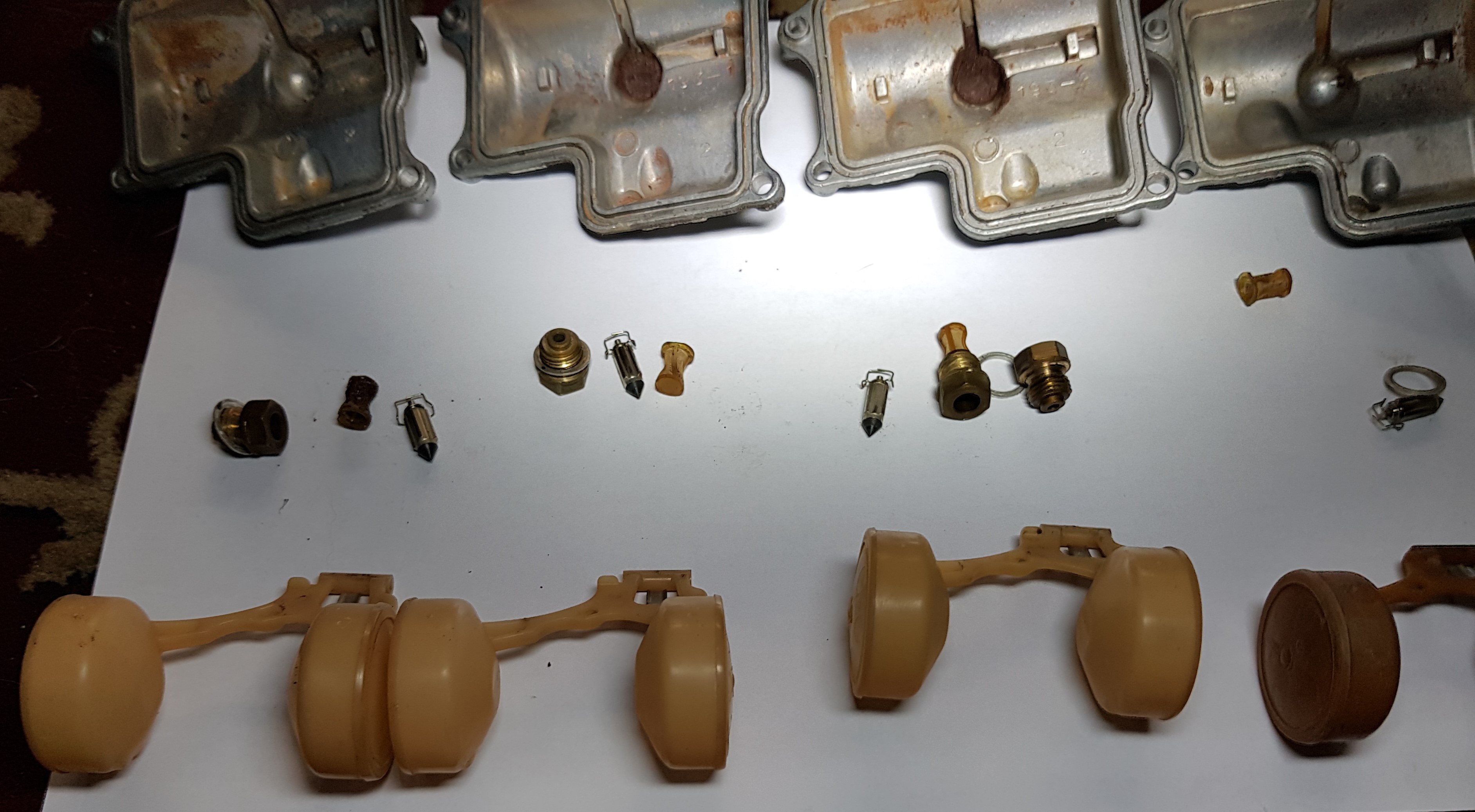 all four carb bowls, in reverse order so left one is on right on bike, notice the gunk in bottom of bowls for centre two even though the filters are clean

Glad you enjoyed the trip Gary,I don’t think we could have done much better weather wise.
The company and roads were first class as usual.
The fuel supply on the RE is a single feed,the rear left is fed from one side of the inlet,front left rear right then front right from the other in that order.
With the majority of the flow going to the right it would seem logical that there are very fine particles in the two float bowls and all the major gunk collecting on the last filter.
What filter are you using in line?
The really fine particles are not a major problem as they can be flushed through the bowl drain screw,something larger is getting past the inline filter that should not be.
Although the fuel drained from the tank looked clear,I bet running it through a filter paper would pick up a fair bit of particulate.
As you said it’s more work cleaning jets out so I prefer to leave the needle valve filters in place.
Best regards Bif

hi bif, thanks again for a great weekend. i’m using a genuine honda filter from silvers which i have since removed and found to be full of crap. the centre two bowls had a large amount of fine particles in the bottom filling the round chamber at the bottom of the float bowl so about 6mm worth but on these two carbs the filter had fallen off the float valve so may have been passing fuel past the filter. I’ve cleaned everything out and blown solvent through the fuel feeds and all now looks clear, have also ordered two new filters from silvers and also a load of inline magnetic filters off ebay and am going to put these in between the tank and the genuine filter to try and remove the majority of crap before it reaches the honda filter, they were so cheap that i will run them for a month then throw them away. eventually the tank will empty itself of crap hopefully! was not sure about the epoxy lining not with the internal filter and pipework in the tank what do you think? also on the F there are filters in the fuel tap if i remember correctly but on the R there are non, has somebody removed the filters or were they never fitted on the R.

Have cut the filter open that I got from David silvers and found it had been put together wrong! The paper element was not sitting correctly in the filter and was kinked up allowing the crap from tank to bypass the element. No wonder I was getting that amount of crap in the carbs. 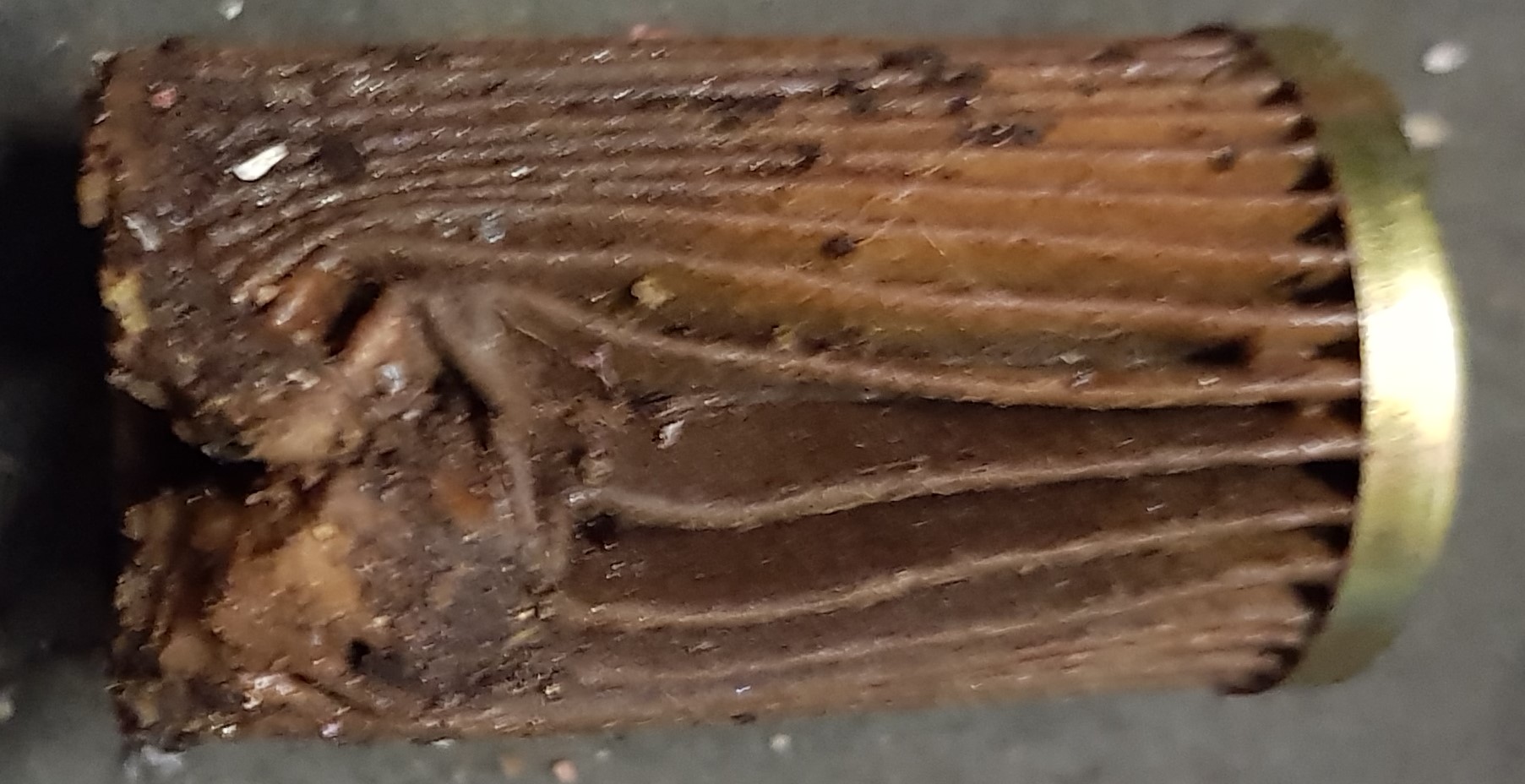 no wonder crap got through filter.