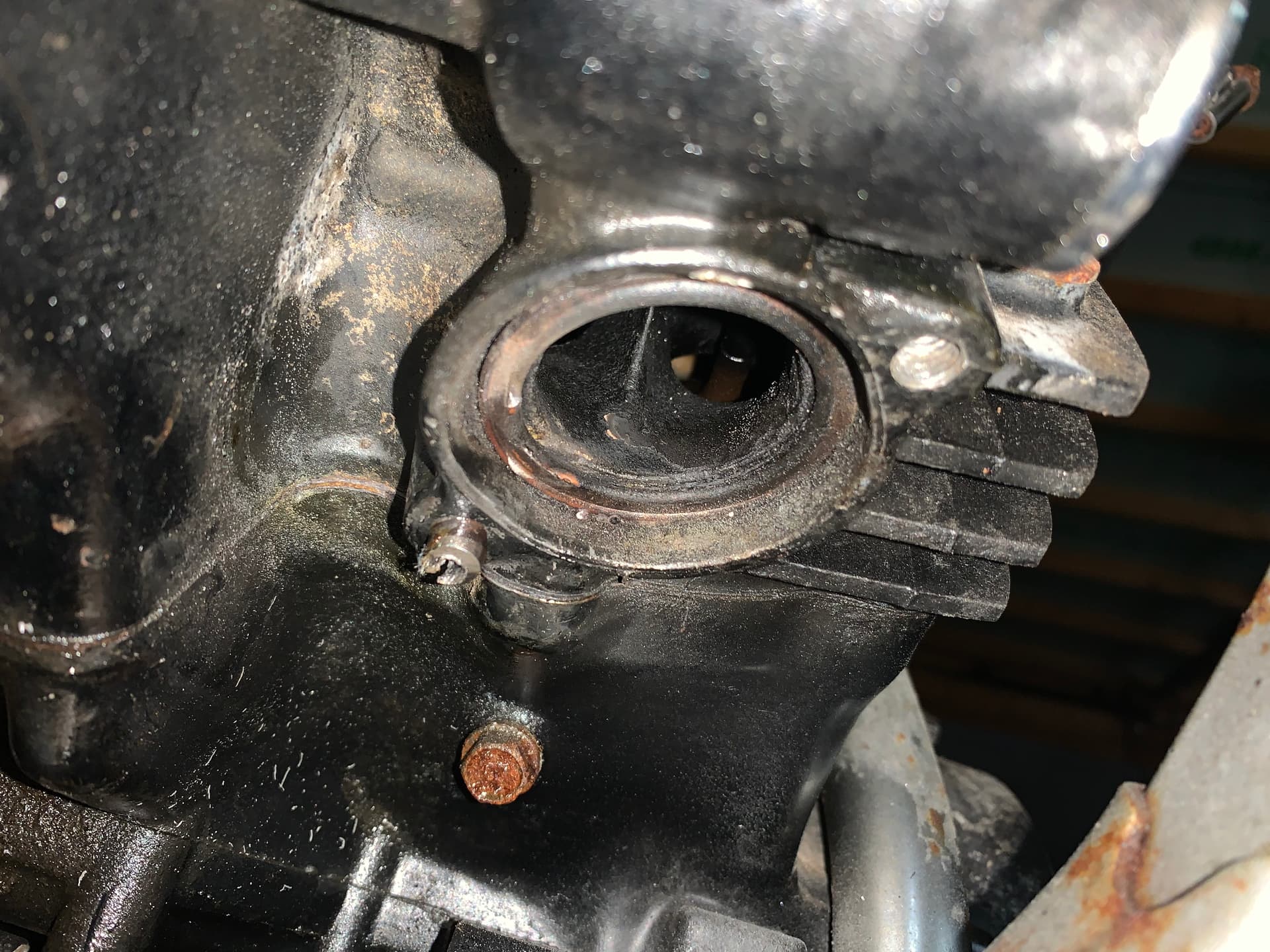 I broke off one stud while trying to remove it. I have tried penetrating oil, heat, and lastly a bolt remover, hence the hole drilled in the stud. Any suggestions?

The only way to get that out would be to (VERY carefully) drill down the centre of the stud with a small diameter drill.

Repeat this process increasing the drill size incrementally until the minor diameter of the stud thread is reached.

There are now two possibilities.

The remains of the stud can be collapsed in on itself by tapping a small screw driver between the stud and the head.

You could run a taper tap down the centre of the stud, cleaning out the head threads that way.

Good luck. It’s going to be difficult to achieve the level of accuracy required with the head in situ.

I have a mechanic friend that will TIG weld a washer and nut to that. He’s pretty confident that will work. I drilled about as much as I’m willing to.
Geez, all I wanted to do was drop the oil pan so I could inspect it. Broke off 2 studs at the cap nut. Got one out. All this work for a simple little pan drop. Just shoot me if I have to take off the head.

That’s a good option. If he can do it without welding the stud to the head that should work very well.

Best option, done that a few times.
Copper washer, then drop a but over the remains of the stud then weld nut to the broken stud.
The heat will also help loosen it, and the increased torque from a spanner helps.

So I had a mechanic try welding a nut to what was left. Since I had drilled down so far, it just kept breaking it until was no meat left. He drilled it out but since my original wasn’t perfectly down the middle and straight (I was really close, not bad for doing it on my back), he hit some of the threads and the resulting hole is a bit off and won’t hold the stud. He suggested a thread repair epoxy but the only one I could find only goes to 350F. Probably not good enough for an exhaust stud.
Anyone had experience with something like Loctite’s Form a Thread or something else? No guesses please, actual experience.

I have never managed to drill a broken stud out free hand,invariably the drill drifts into the alloy.I use a helicoil to replace the original thread.
It’s a simple solution that gives a permanent repair stronger than the original

Run a taper tap down the thread, then follow that with a plug tap. That will remove any stress raisers from the drilling operation.

As Bif has said, the helicoil insert will be stronger than the original thread.

Should not be a problem welding to head as steel does not weld to aluminium by heating. That’s why Falco1uk puts a copper washer on first to protect the alloy from melting. I would suggest cleaning out the hole as much and as clean as you can, then clean out with brakekleen or similar and compressed air. then use the thread repair epoxy or liquid metal to fill in the extra space that the drill made. Try to keep the hole as round as possible. Then you can use the drill in the thread repair kit, and keep it as straight as you can to the original thread line, and hope that it cleans out most of the foreign material including the epoxy. If it does, tap out the hole with the tap in the kit then put the longest thread insert you can fit into the hole. I have done this many times in the past but always removed the engine or whatever it was that needed fixing so that I had the best chance of getting the drills as straight as possible. If you need to do a precision job then you have to take your time to give you the best chance of succeeding, generally by using the smallest drill you have then gradually enlarging the hole.