Hi guys, just been getting the carbs balanced on the fe after fitting new float needles and I went to start her up and noticed the fuel I had put in the temp fuel tank the night before had gone so I added more fuel and fired it up, now she only started on 3 cylinders and the front right cylinder refused to fire so I switched her off, then I noticed fuel dripping from bottom of downpipe, so the carbs do not overflow at all but the fuel is leaking into the cylinder, any ideas why please or is it a carb off and strip them again

Bought seats and float needles, carbs are not overflowing externally, think one is leaking petrol down inlet but not sure how this happens and where the problem is, any ideas please

Cheers Pete, will pull apart again and take a look

Hi guys have sorted the flooding cylinder, so runs on four fine and sounds sweet, next issue balancing the carbs, does anyone have a tool or a way they adjust the two screws to balance them up, I have tried but cannot get my bloody huge hand in that small gap underneath carbs, also Bif or Jon or anyone it ain’t charging have checked fuse you fitted Jon and that’s fine could you let me know how you wired it up as need to check wiring before getting another rectifier, help please

what voltage are you getting when the engines running ?

Battery voltage only 12.1 volts so no charge what so ever

The two red /white wires are wired direct to positive, Two greens direct to battery negative. that is the only difference. The rest is as standard. If it isnt charging the generator needs checked as does the reg/rec.
If youcheck the manual it shows the wiring diagram and shows how test the alternator and reg/rec. My Bol is wired exactly the same and it works fine.

Hi frew, nice to hear from you mate, I know the wiring works mate just wanted to know how it was wired have tested the generator and it appears OK as none of the windings go to earth, so must be the reg, can anyone tell me if the reg with the two red and white and two green wires but instead of the ignition signal wire which I think is black, I have one with a extra green wire instead of the black wire with a holed terminal on it which you bolt to earth instead, can I rewire it to work.

I nealy killed my yuasa battery by leaving it over winter last year
I took the bike for a ride to wroxham and it died not enough voltage in the battery
eventually got help to start it and got home just.
checked the battery voltage 12.6v 1 volt makes all the difference, my battery had sulfated one cell was real low compared to the rest so i desufated the battery over 3-4 days recharged it fully using an old non electronic charger to 13.6vdc back from the hospital ,works fine now
dont thow away your battery drop it round mine and i will recover it to full working order
works 99% but wont make a battery with dead cells in it live yours sound like i can revitales it back into life
my one on trickle through the winter now using a £33 gunson for bikes and it also desulfates too

Hi windy solar my battery is new and I have a led volt meter fitted to the bike, so I know it ain’t charging at all,

heres is the test for the regulater rectifier 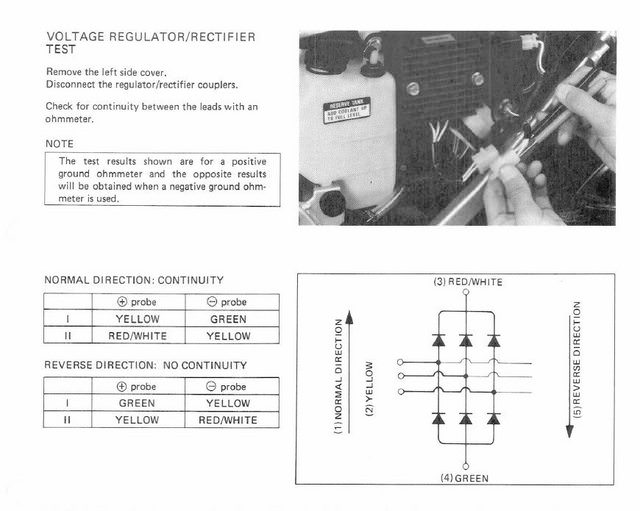 There is a honda tool but most people use either a flexible screwdriver or small socket set with an adapter to change angle of drive, not sure of the correct term for it. Best method I’ve found is to adjust two easiest screws with flexible screwdriver then turn off engine and open throttle so third adjuster is easier to get at then re start engine to see if you have it right, if not turn off engine and adjust again till you get it right or file down your fingers till they are thin enough to fit into the ridiculously tight space between carbs!

I used to use a 7mm socket rammed onto the short end of a quarter inch allen key,

Cheers guys will give it a go and let you know