Having priced the Maxton cartridge conversion at just over £350 for the bobby basic non adjustable type,Teambif have put together a set of cartridge forks with preload and compression damping adjustment.
These are a straight swap on R and FE models.
It’s hard to say what the total cost actually is as some of the parts came my way in a swap.
Anyone interested in the details let me know and I will get some pics up and a parts list.
Regards Bif

Damn, the forks on my FF are one of the only things I’d not change, as the previous owner seems to have got them just right for the road.

However, I’d be interested in the details of what you have for reference.

Can you please post details of your front end set up. 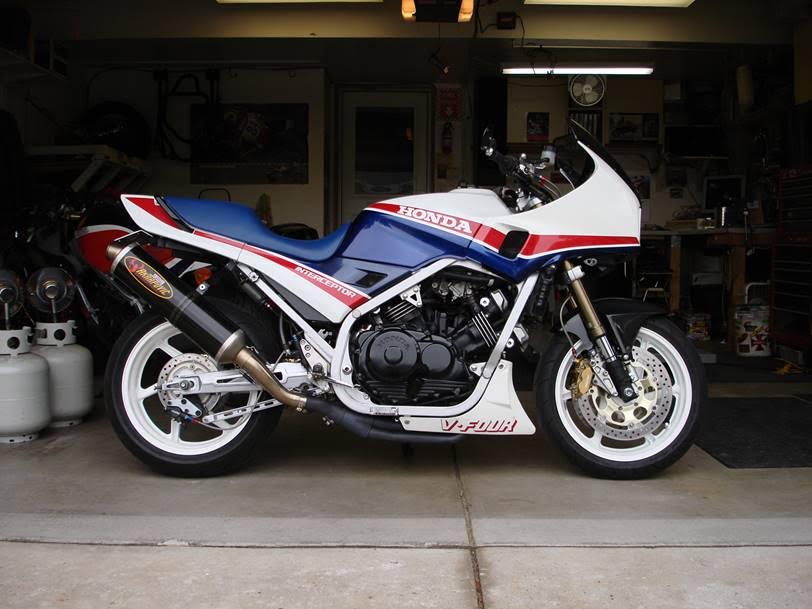 Is it my forks you are looking for details on?

The previous owner was Wilbers agent and he said he has de-activated the anti-dive system and created a custom spacer for preload. He then got a set of Wilbers linear springs to suit the on road weight of the bike, and used Wilbers suspension oil with a tuned air-gap after trial and error.

AFAIK, the actual damping is stock, but the fork stanchions have been gold-nitrided too.

Mated with a Wilbers 641 shock, the bike rides very well and copes nicely with my mod of a Blackbird front master cyliner giving a sharper brake action.

Hi Bif, I’d be interested in any info/pics on this conversion.

This is a job I need to finish Bart,problem is my brain,slow as it is,is faster than my hands and fails to allow for the two ongoing projects already taking up the limited free time I have.
The basic components required are,a set of Firestorm cartridges and fork tops and a set of CBR1000fp stantions.
The preload spacer on top of the spring is replaced with one 15mm longer and an adapter is fitted to the bottom of the cartridge to extend it by 50mm.
All that’s then needed is to remove all the gubbins from the VF lowers including the seat at the base of the anti dive side.This is a pig to get out but does come with a bit of patience.
Then assemble as normal.
Best to fit linear springs to suit the weight of the bike and rider,Sonic springs have a rate calculator on their website.
I’m away for a few days R+R with Mrs Bif but will get some pics up once I’m home
Regards Bif

That’s very interesting Blf, was wondering which bits would fit, thanks.

Have you tried any imitator things ?

My Boldor is running a set of racetec gold emulators which work very well.
The problem as I see it is,unless you buy directly from Racetec or their agents you would have to set the valve up on your own.
I like working on my bikes but,endless fishing of the valves from the forks to adjust them is too time consuming for me.
Racetec took all the usual details,weights,riding style etc and set the valves up for me.
It was the top side of £250 from memory so in the same ballpark as doing the cartridge conversion.
There is a NZ company now producing “sportsvalve” which gives compression and rebound damping adjustment which is adjustable without removing it from the fork.
Again this is not cheap but the way I will go the next time I build a front end.
Regards Bif

Wow, Racetech are a bit pricey, but saw a similar thing on ebay from YSS like this

They will still be a pain to adjust of course but a lot cheaper, but are they “too cheap” and not much good ??

i have a pair of the yss ones on the way, going to try them in the “R” first to see what they are like, i dont think i will have time to fit them before scotland… too many other things to do… “so much to do…so little time :-[”

The trip up north finished the tyres off on the R,as the wheels were of to fit new boots I decided to get on with the modified forks.
A set of fork lowers were stripped,blasted and painted.
Remember to remove this damper tube seat from the left fork

Yes, great stuff Bif, I will be following this with interest

The run to Squires seemed too good an opportunity to miss as a try out for the forks.
So Saturday after work I swapped the forks over and went for a short test run.
The preload had already been adjusted to give the sag I needed so it was just a case of tweaking the compression damping to match the rebound.
It’s presently set at 2 and a quarter turns out and feels pretty good.
Johnboy took over the controls on the return leg as far as Kirby Lonsdale and was quite happy with the way the whole plot works.
In summary I would say that the front end reacts much like the Blackbird,but is slightly more plush.
Not that the Bird is bad,only that it balances out about 90 and the R is smooth from the get go.
Bigger bumps could be felt but didn’t unsettle the bike at all,but that may be down to my bulk more than anything,one of the upsides to being bigger than your average bear.
Scotland is calling at the end of the month and the R will be running with some big guns,I just hope I can do it justice.
Regards Bif