Thanks to you guys i got the bike running again today but 2 new issues popped up:

Im sorry but the previous owner really did his best to screw up the bike, me instead am intent of bringing it back to excellent condition as it deserves…

If the carbs have been cleaned then I would use a carb cleaner that is added to the fuel.

The forks can be aligned by supporting the bike with the front wheel off the ground,loosen the bolts on the top and bottom yokes as well as the pinch bolt and top steering stem nut.
Turn the handlebars to the left until the steering stop is contacted and twist a little more to the left.Check alignment,repeat left or right until everything is in line then tighten all bolts to specified torque.

Hi Bif, thanks a lot for your assistance, the carb fluid i have at home, didnt think i would need it for this one as supposedly the carbs have been cleaned thoroughly…

For the fork i had this solution in mind as well as my KTM needs that once in a while to get things aligned again…wasnt too sure it could work with the VF as well.

From the other problems you have found I would take anything the previous owner said with a big pinch of salt.
Keep up the good work

pinch of salt? Heck I think i need a whole trunk full of salt for that

Well, what a surprise, with the carb liquid the bike still doesnt run that good, but better, i will give it some time…
But…now that she revs high another issue, who would have thought so, popped up…the hydraulic clutch slips at 8.000 rpms…and as, at least to my knowledge, you cannot adjust a hydraulic clutch i will need to change the clutch at some point…

Looks like my VF500F was done from the same guys …

The more you dig into it the worse it gets. They put shrinking tube on the clutch rod to extend diameter. The spring on the oil seal was broken (could get it out of the engine) and it was leaking.there. On the 500 you don’t have this extra housing. I will try to replace it from the outside. Otherwise I have to split the engine. 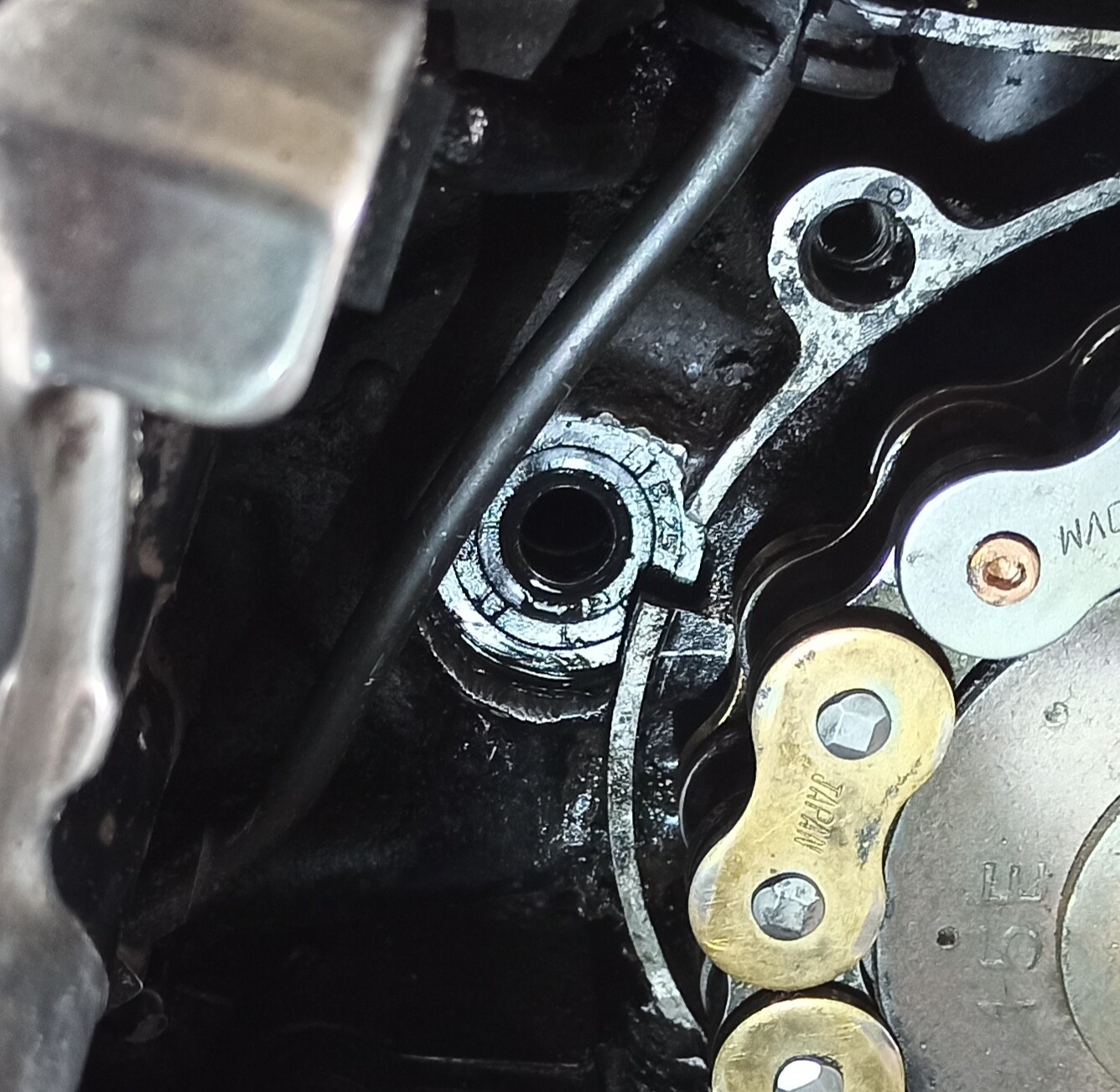 Maybe they used oil for cars or the clutch spring / friction plates are worn. At higher rpm there is more torque. But nothing to adjust. Only thing to check would be the master cylinder lets the brake fluid back. But I guess if that’s the point the clutch will slip at lower rpm also.

on my account a small update, opened the clutch liquid reservoir and looks like the clutch fluid hasnt been changed since 1986…

but anyways, i drained all of the old fluid, cleaned the reservoir and tried to flush the system before filling it up with DOT 5.1 and bled it, in any case the clutch now engages much earlier, but havent had a chance to try it out if it helped my initial issue.

This has now led me to the comclusion that I will change the fluid on the brake systems as well, and probably update to steel flex brake lines from Melvin or Fischer at the same time, I believe those 2 have a general permit in Germany without having to go to MOT to get them registered…

Oh BTW, the guy didnt know how old the tires were, well i do now…from 2009…but they still seem to be in good shape, soft and clean…

on a hunch im gonna change the air filter as well tomorrow, as i fear it will probably have cob webs or worse in it…

next Stop is realigning the Fork and see if I can get it straigthened, if not I know what i will be buying next…

One (probably the only one!) of my areas of knowledge is tyres.

To determine if the tyre is still up to standard regarding the compound, get hold of one of the moulding flashes (the thin little bits of rubber that stick out of the sidewall) and pull it. It should stretch. If it snaps with very little effort, then the tyre compound is degraded and won’t perform as advertised.

If they snap, the inter ply cohesion will be suspect.

Well, the clutch is definitly better, but still slips sometimes at around 9.000 RPM’s, guess at one point i will have to change clutch and springs, but not quite yet…

But, of course, another issue showed up, if i really gas the bike it seems to empty the carbs completely and will stutter a bit till the Gasoline flow stabilizes again, is this a known issue? How can I alleviate this, should I drop the needles in the carbs one notch(is that even possible in the VF), or should i change the mixture by opening the screw a bit? Or do I need to syncronize the carbs(gotta see where I have the syncronization tool, its somewhere in the Garage, didnt think I would need it again)

That sounds like fuel starvation. Is the pump running, or the filter blocked?

pump is running, I short circuited it to check if so, and it runs

the filter I gotta check, looking at all the issues with the bike I wouldnt be surprised if it didnt even have a fuel filter

good thing i got it, in my opinion, for a good price…

Sometimes even “for free” is too expensive…

I wouldnt say that in this case, the engine, at least for the moment, makes a good impression

On the last Scottish trip one of the bikes had this problem,eventually traced back to air being drawn by the pump from a loose fitting joint.
The bike ran fine up to 60mph but any faster would encounter the symptoms you described
Also worth doing a flow test as described in the manual,bikes that have been stood can have partial blocks in the steel supply pipe from the tank

Thanks, i need to check the fuel supply system, sth is wrong there( how could it be

)
Does the VF 1000 F2 have a under pressure system to supply gasoline to the engine, or is it all done over the fuel pump?
The other thing i noticed is that the choke seems to be more or less useless on the bike, god knows what he did there…

so I have found some more information concerning the issue with the gas…it actually seems to empty the carbs fully sometimes whilst driving, i then have to short circuit the pump as you guys explained, and it will work find afterwards.
I checked everything and could not find anything wrong with the fuel lines…is it possible that this behaviour is caused by the pump itself, or by a malfunctioning relay?

She drives fine, then you gas it and she will potentialyy start coughing, then it can happen that it empties the carbs, and eventually stops…do the trick with the pump and she works again…

By the way, changed the air filter this morning, think it was from the 1990‘s by the look and smell

You may have a faulty fuel pump relay, if I was you I would unplug the relay and run the bike with the jumper wire in and see what happens,
I run all my vfs like this .

thanks Pete, doesnt it damage the pump if its permanently on?

No, I run mine through a relay powered from the kill switch rather than the ignition and when it reaches pressure the pump stalls until pressure drops again. I prefer this way as you can hear the pump so know it’s running before you start the bike.