Fans not cutting in

Hi guys a few questions, ran my 84 vf1000f for the first time today and the fans never kicked in with the temp guage nearly on the hot mark,bridged the thermo switch wires,fans did not kick in,checked with a volt meter and no power getting to the switch, also checked the thermostat and that did not open,so that needs replacing does the switch on the thermostat housing just control the temp guage,? i have heard that there is a lower temp thermo switch whitch cuts in at a lower temp is that correct, any ideas why i am not getting power to the switch, have checked the fuse. hope someone can help.Thanks Dave.

Hi Dave, the fan switch on the upper radiator switches the neutral so there won’t be 12v at switch. Test for 12v positive at the two plugs for the fans. The sensor on the thermostat is for the temp gauge only. There are several different fan switches available to bring fans on at a lower temp, if you search forum there should be some links if not let us know and I’ll find one for you. A lot of owners put an override switch in for the fans so you can turn them on manually as the switch is quite high on upper radiator and you only have to lose a small amount of coolant before it no longer works.

The thermoswitch at the radiator switches the live supply, earthing through the fans.

There should be 12v at the plug with the ignition switched on.

The temp bulb in the thermostat housing just supplies the temp gauge, it has no part to play in the fan operation.

Sorry Chris but you are not correct. I have been reading bike and other electrical circuits and diagrams for forty years (electrician, small engine mechanic, Motorcycle mechanic/electrician) The electrical circuit diagram for the VF1000F clearly shows that the thermo switch earths the fans. A Black wire with Blue tracer takes 12 volts from the number 7 fuse to both of the fans then a Black wire comes from the fans and goes to the thermo switch.(in the wiring diagram) If you grounded that wire then the fans should work when the ignition is on, but it goes through the thermo switch. When the switch closes it connects the Black wire to a green wire.(in the diagram) The Dark Green wire is always the EARTH wire in Hondas. Again the wiring diagram clearly shows The Green wire from the switch goes to an Earth connection to the engine or the frame. In some switches that have only one connecting wire terminal the grounding to earth is done by the switch exterior grounding to the radiator. If you take that black wire off the thermo switch when the ignition is on and connect it to ground(engine or frame) then the fans should work. If they don’t then there is a problem somewhere in the circuit. Always start at the source(fuse) and work along the circuit until you find the problem. Turn on the ignition switch, If there is 12V at one end of the fuse but not the other then the fuse is blown. If there is no voltage at either end then there is a problem with the ignition switch or the blue & orange wire from the ignition switch to the fuse. Once you have 12V at both ends of the fuse then work your way along the circuit until you find the problem.

Hi thanks for the reply i found the cause in the end it was a dirty contact within the ignition switch,so no power getting to the fans,lucky it was an easy job to take switch apart,cleaned all the contacts,now all working fine.

Why does my FF have 12v at the plug with the ignition on, then?

Are the fan motors connected directly to the live supply?

Having looked physically at the wiring on my bike chasing a lack of operation fault, the motors are earthed and the supply is switched via the thermal switch on the upper radiator.

Has my wiring been butchered?

Wiring diagrams for the VF1000 E, F, & f2f. All have the same wiring for the fans. If your wiring looks like what I have described then they should work as described, if not, then I have no idea what anyone else could have done. So it looks like someone may have had a problem and fixed it their way. Which direction do your fans run, Forward or Backwards? Which of the wires on the thermo switch is carrying the 12V? and how are you measuring it? Tell me what colour are all the wires from the number 7 fuse to the thermo switch. The fans should not be earthed. Haven’t you been having some trouble with what was done with your bike in Australia?

Hi Chris hopefully this mud map explains a bit more about how your fans should be wired. 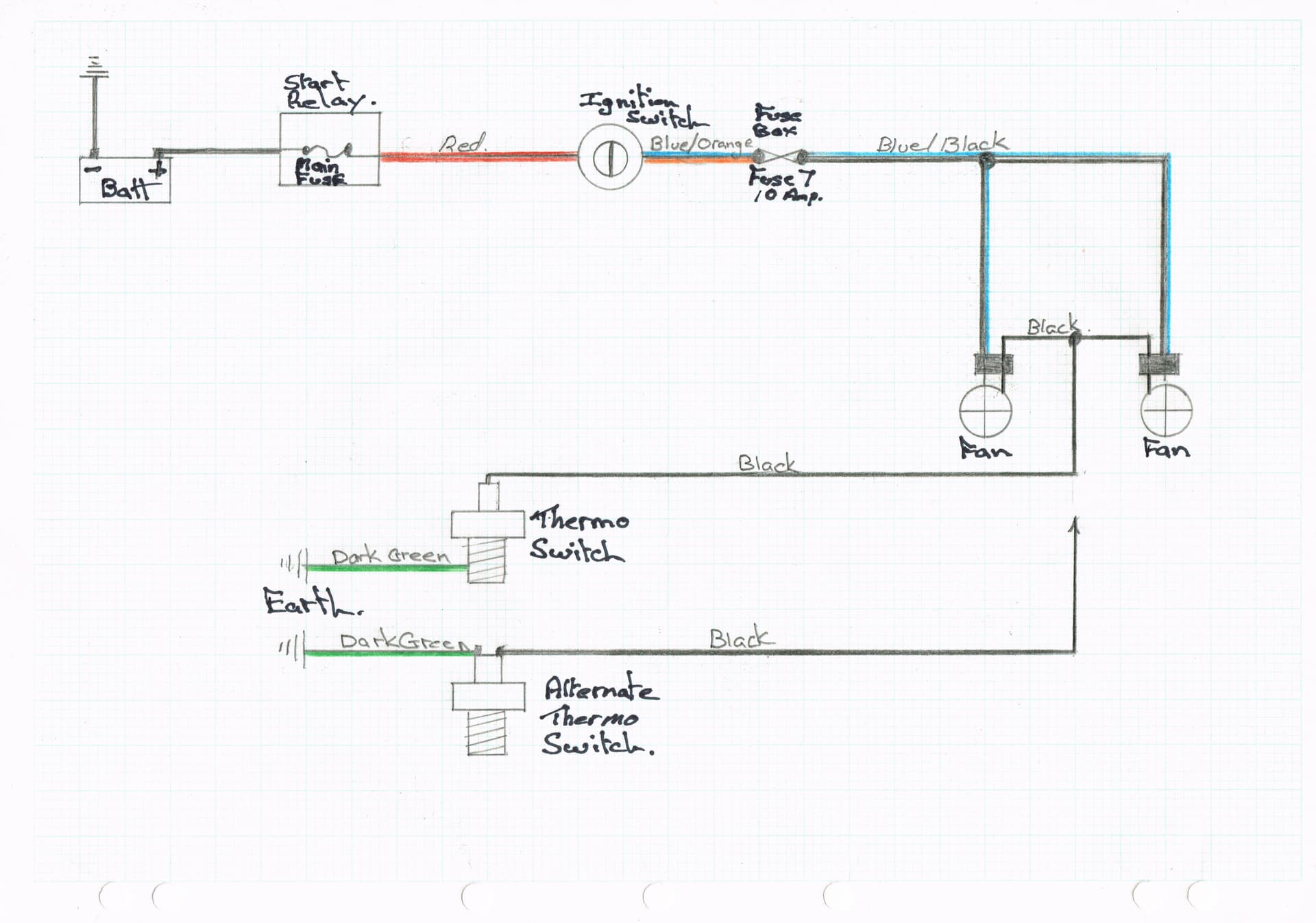 I’ve just worked out why there’s 12v across the plug.

With the ignition on, there is 12v to one side of it, the other side being earth seeking.

I will say in my defence, M’lud, that it’s not good practice in my field (aircraft) to swich the return - convention is to switch the live feed so as to completely isolate the system when switched off.

Having traced the wires physically and confirmed the above, I have now dressed myself in sack cloth and covered myself in ashes as a pennance…

That’s good Chris at least now you know the answer. Bike electrics can be very confusing sometimes. I must admit that I find it interesting that there is still 12V’s at that terminal. I would have thought that the voltage drop through the fans would have been higher. Must be very little resistance in the fan motor windings. So it looks like we all learned something new today. You guys over there must be getting ready for winter by now? Stay safe.
John

Ooh that’s got to chafe

I’m actually in the UK, and shipped my bike back from Oz (looooooong story). It was my hack out there when we went to visit the rellies. Said rellies buggered off to Tasmania, so there was nowhere to store it other than in a lock up (much wompa needed), so I bit the bullet and shipped it back.

It was cosmetically restored before shipping (see the thread on the things I found wrong with it!) and messed about with by the importer when it was pommified.

I fixed the things I found as I found them (hence the fan work - the thermal switch was knackered, although it was supposedly a new one). My trade training (aircraft) was such that the live side is always fused and switched, hence my assumption that, in the absence of a wiring diagram, with 12v at the plug it was live switching. It satisfied my expectations, so I didn’t question it.

That doesn’t mean that there should be 12v there, but the fans work and don’t blow the fuse, so all is well.

The rest, as they say, is history.

As an aside, and in answer to your question, sometimes, over the winter, the temperature where the bike used to be can drop as low as 15°C. Not much preparation required if you’re a Pom out there lol.

Thanks for your guidance.

I grew up in UK near Liverpool until I was 10 so I remember what it was like walking to school in knee deep snow, in shorts. That was a looong time ago. Send me your private E-Mail address and I can send you a wiring diagram and some other material that may be of interest to you re VF1000’s. (Workshop manual, Original parts book) and other stuff. All on PDF,s.
My E-Mail is jovi6678@bigpond.net.au Where did you live in Aust? We are in South Australia.