I think the pipes you’re looking at could be the venturi air pipes for the diaphragms of the paired carbs.

Yeah i think you’re right , the black plastic ones.
But why are they different the reason i’m asking is i built up a bike from bits an FE , then i bought a spare bike for bits also an FE .
The one i put together does not have the venturi air pipes going up to the air box yet the other one does , does that mean i have F2 pipes and air box do you think i should change them over?

Better ask bif. I’m not so up on the differences to the f2?

Hi Bluey,on the E model including the R the air pipes joining the carb pairs vent into the aluminium base of the air box under a small plate held in place by a single screw.The FF,F2F,RF and RG carbs air pipes join onto a hose which vents to atmosphere just above the rear shock top mount.Mr Honda must have had a reason for this mod to which Teambif is not privy.Apart from the mismatch in pipe diameters I see no reason why the carbs wont swap across models.Regards BIF.

So you reckon it will be ok to run with the pipes i have (not going up to the air box) ?

Give it a go,whats the worst?

Hi Bluey, Bif, did this work? I assume you ran a hose from the air pipe instead of fixing into the air box.
I have the same problem or at least I cannot identify the plate in the aluminium air box, I do have a hole with a rubber grommet in it but no plate
Thanks
Neil
PS Apologies I know this is a very old post

Send a pic of what you have,I may well have anything you are missing.
Later models ran pipes venting to atmosphere,the jetting was altered to compensate for no negative pressure in the float chamber

And the float heights are different by 1mm as well. 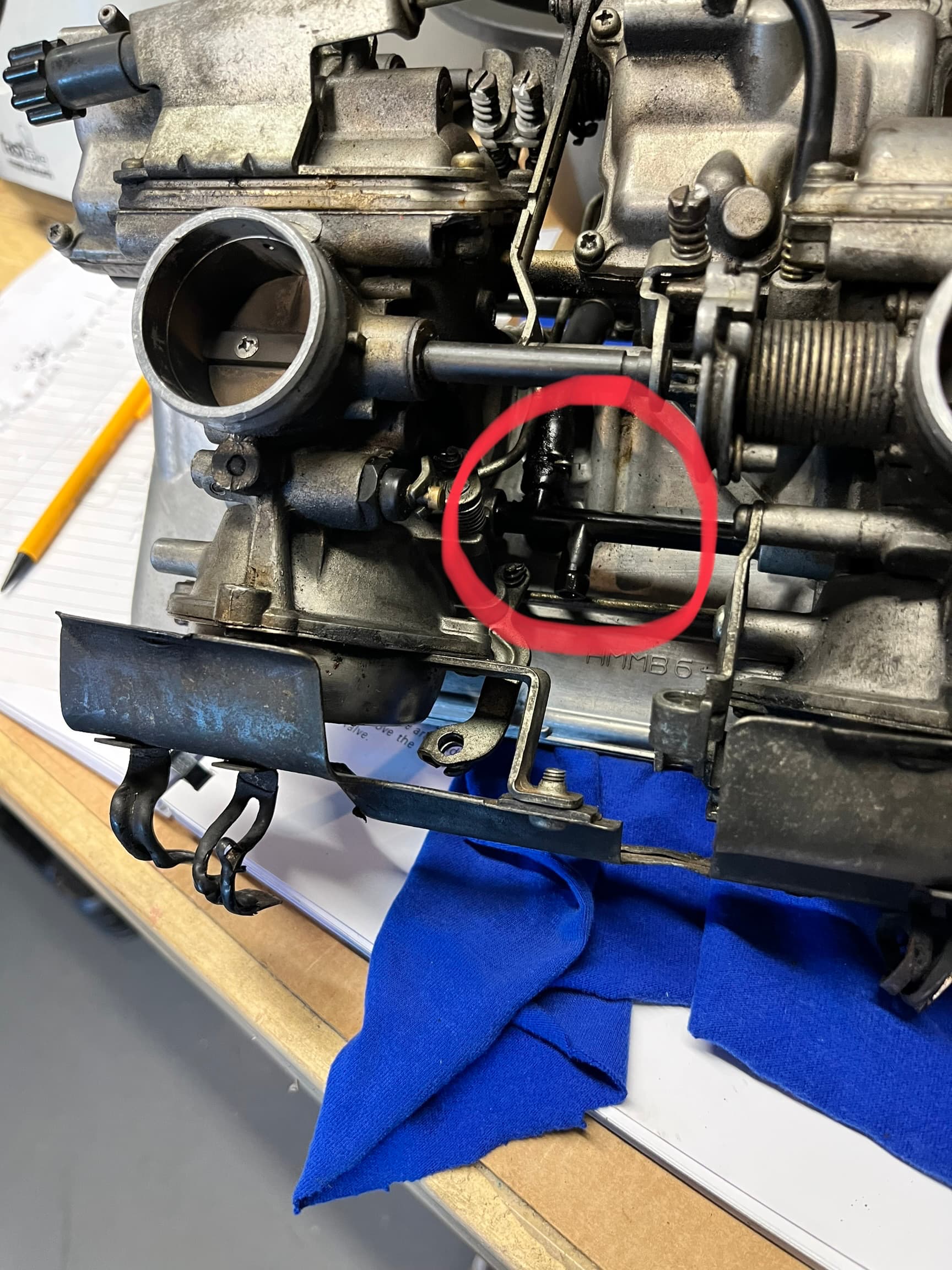 Your carbs have been fitted with the revision kit,just check the size of the main jet,it should be 115 if the whole jobs been done
It has been fitted backwards tho,the vent should exit at the rear of the carbs to atmosphere

Thanks Bif, I have a couple of additional questions:-

Also here is the picture of the inside of the alu plate attached to my carbs, this shows the two grommets which I assume is part of the revision kit you mention Bif. 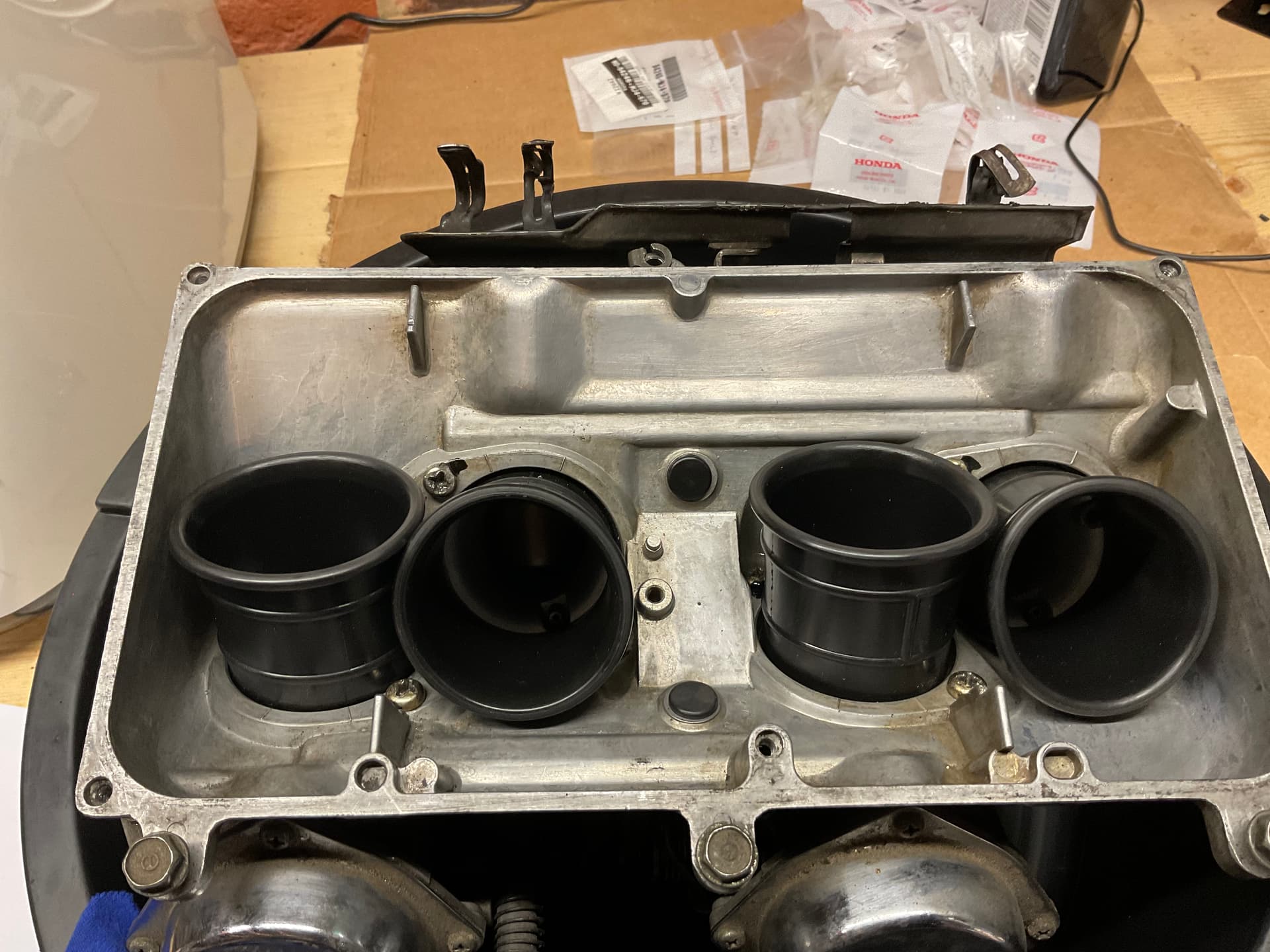 Yes they come with the kit,looks like it’s been a proper job,just baffled as to how they got the pipes mixed up

It’s been running ok and all the plugs look ok.
Do you think that I could just run a hose from the cross piece plastic tube from its current location on the front carbs rather than swap them around?

The carbs have worked fine up to now so I would probably just leave them as is.
Finding a route for a pipe may present more problems than fitting one is going to solve

Hi Bif, I am in the carbs today and have started to clean them out and change jets with a kit I purchased from NRP. The main jets in the bike are 120 so I am assuming these are the revision kit as close to the 115 you mentioned. I have cleaned and re used these rather than fit the new kit which came with 145 main jets. Do you agree with my logic?
Thanks Fry

The carbs will have had 145 mains originally before the revision kit was fitted,your thinking is sound I would use the 120 jets too