Hi All!
My name is Chris and I thought i would post an introduction as a new member of the Forum!
I spend 9 monts of the year working in the South of France and the rest with my Family in the Phillippines.

3 months ago I bought my first VF1000 as a non running project for this winter. 7 years ago I did a similar project with a 1982 Yamaha Xj900. However after using it for touring and exploring Europe and putting more than 183,000 kms on her I decided she needed a rest, hence the purchase of the VF!

At the time of purchase it was a non runner, no electrics even, so a dead 'un! I paid next to nothing for it, but I ,aint completely nuts ( well not yet!!) as I have known the bike for quite a while. Basically the previous owner had a low speed off on the right side and stored it for 5 years as a result. It is essentially a hybrid of an SC19 engine and Chassis with earlier bodywork. 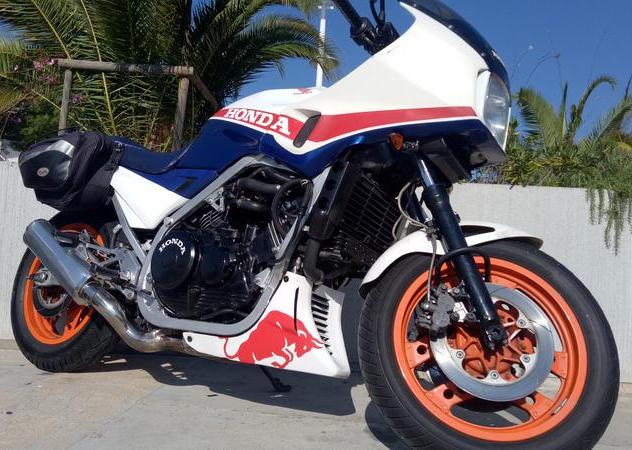 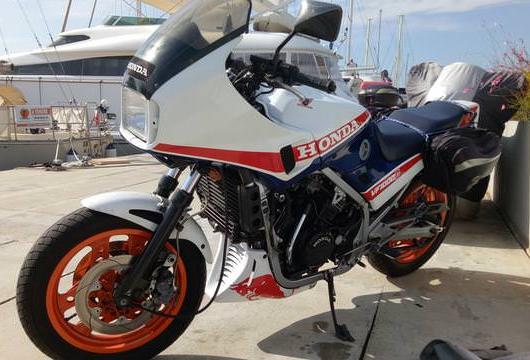 Next on the list is a repaint in original colours and change the orance rims to gold.
My goal is to have a nice looking bike that runs well!!

That looks a cracker. I like the nod to modernity on the belly pan

What sort of a zorst system is that? Looks the business.

Hi ascalon, It is!! it’s a custom made Stainless steel system that was made by a French guy who used to build them for race teams, Full tig welded and polished. I am told that it had a four figure price tag when new!? Its pretty loud but I can get away with it here if I don’t crack open the throttle too much!

Mine is on reasonably standard collector box and cans, but it still has a nice growl, as I think the previous owner re-cored the cans.

However, I think to make a proper impression on the forum elders, you should take extensive and detailed pictures and post them up, just, you know, for reference

Hi Vifffer, actually I dont have many photos yet, I have spent my spare time rebuilding it and riding it , rather than looking at it and taking photos!! I have a couple more and I will post below. When I have more time I will take some more, close up and post!! 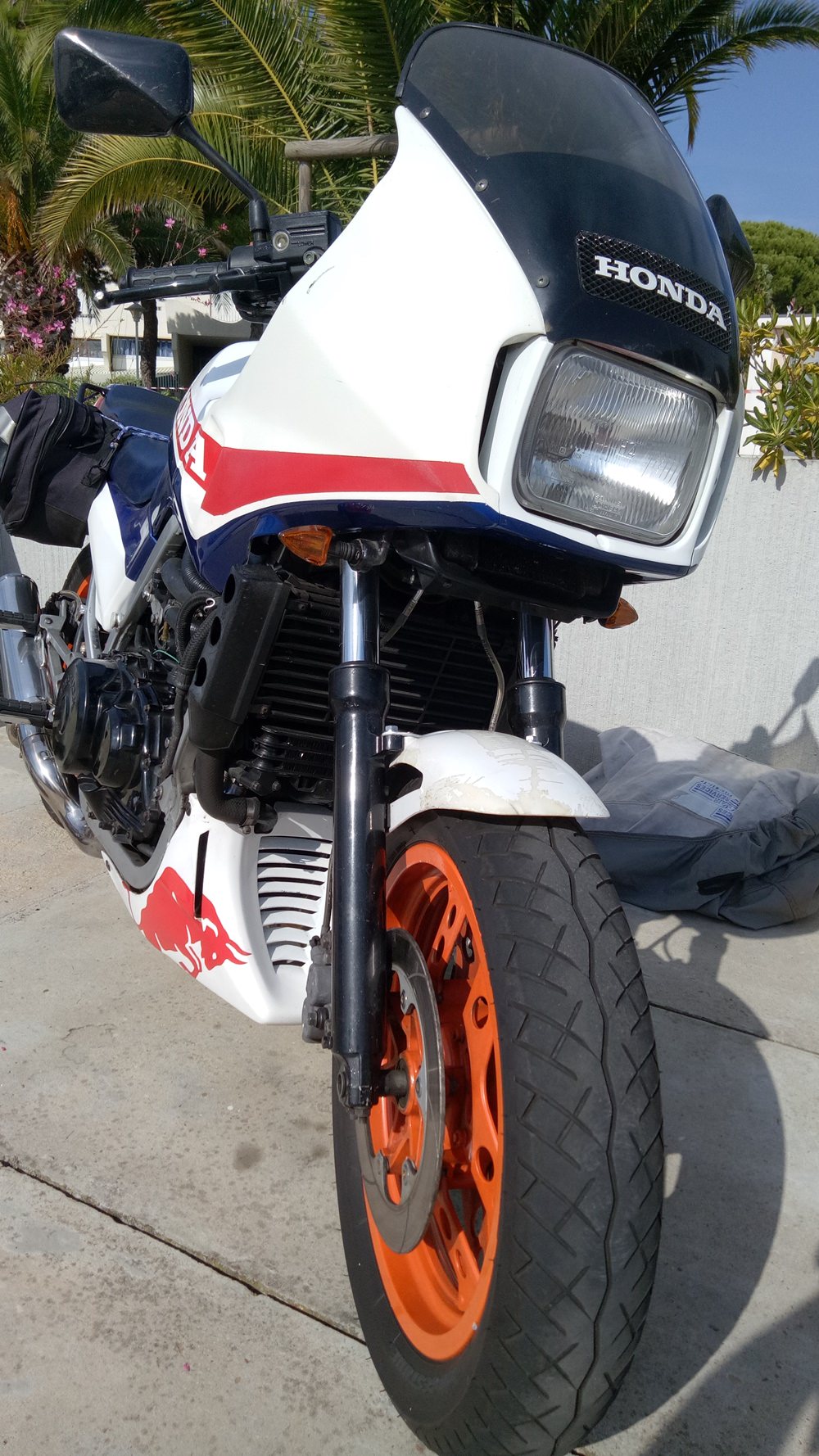 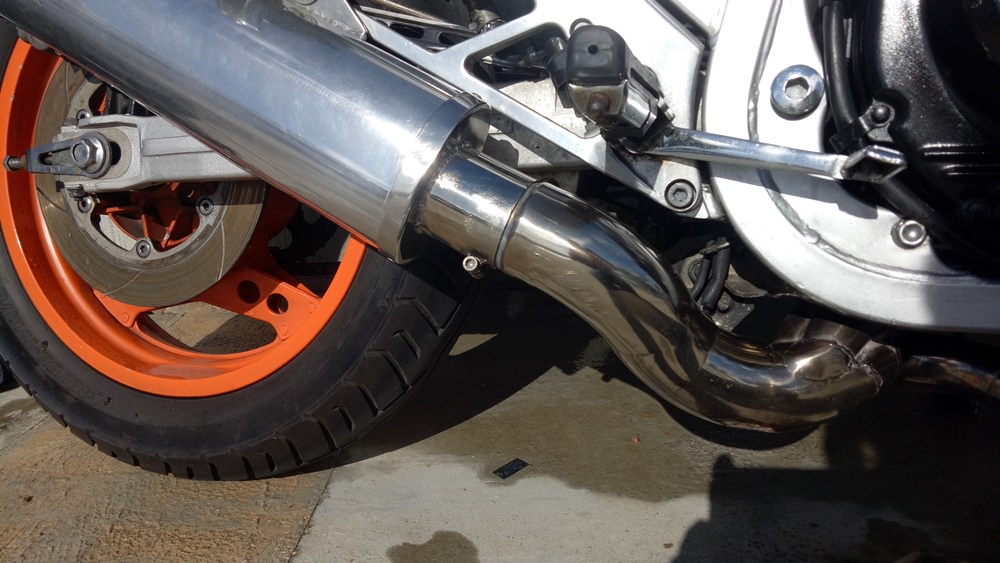 MXVGhcu.jpg1000×563
I agree on the gold rims , I think originally they were black but the orange was put on very heavily and the rims will require paint stripper or light media blasting (eg; baking soda) before a repaint.
1 Like
bif November 3, 2018, 12:28am #7

Hi Chris,an interesting mix you have there.
There was a discussion a bit back about locations for an oil cooler,you or the previous owner seem to have found a good spot.
Some owners may benefit from a close up of the mountings.
Your exhaust is very similar to the Devil 4 into 1 system all be it in stainless
Regards Bif

Hi bif, the oil cooler was already there when i bought the bike. As I have no previous expierience with V4 honda machines I did not even realise that the oil cooler was unusual, to be honest as the pipework which comes out of the oil pan btw and not some kind of oil filter adapter, all looks completely factory fitted. However the mountings are temporary as I need to create a new bracket for the oil cooler rad., but in the same location.
One of the first jobs I had to do was to chase a random main fuse blow out and as I had no easy access to Honda parts I adapted the main fuse holder to a modern Blade type fuse: 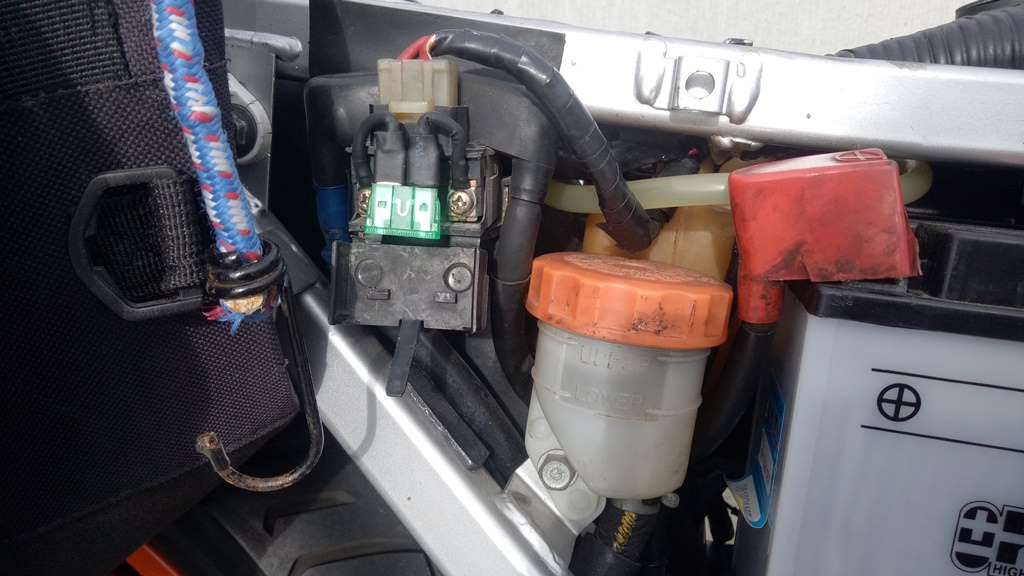 FjV1FOk.jpg1024×576
This enabled me to easily replace the fuse until I disovered the fault which turned out to be the starter motor windings. 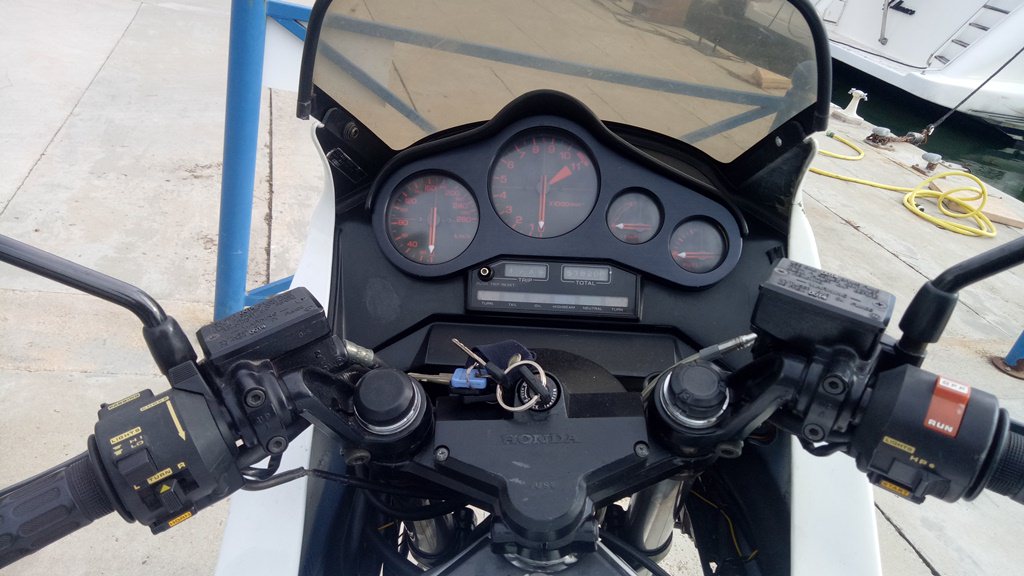 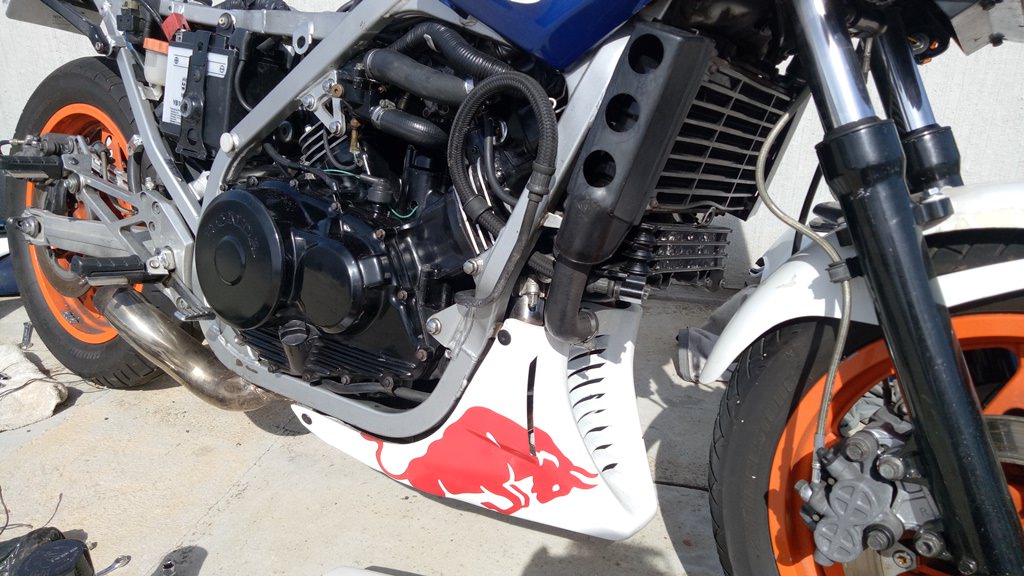 astwYOo.jpg1024×576
I do not have a shed or garage hear so all works are done outside, happily the weather is not so bad at all! 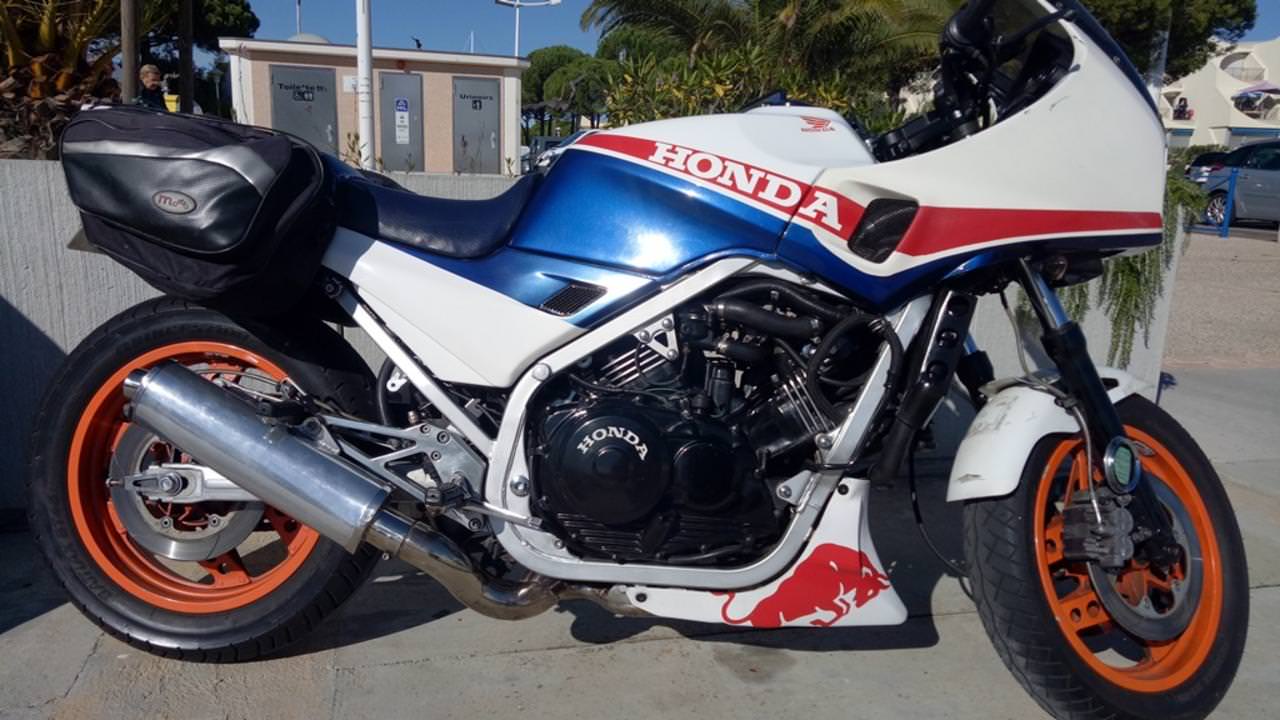 Bif; It was very rude of me not to mention in my last reply, my sincere gratitude to you and all of the other forum members who regularly give replies to other members various problems and woes. I was able to scour this Forum gaining a huge insight into the various common and not so common issues with this particular motorcycle. From the outset of this project by using this information, I gained not only knowledge but also confidence to be able to take on such complex but immensely satisfying motorcyle.

Thank you once again to all!!

Jaysus that exhaust is outrageous!!!

Yup! and a tad on the loud side of outrageous unfortunately. However one of my neighbours told me that it was not too bad at all and certainly quieter than another neighbours Hardly Dangerous moto, that has open pipes on it. I plan to reduce the diameter of the muffler internal baffle pipe a bit and repack the fibreglass, that should take a bit of the ‘bark’ out of it!

With you on the K+N and Dynojet kit,not so sure on the fully synth oil.
In an experiment I conducted myself,I found oil consumption significantly reduced when changing from semi synth to the recommended mineral oil.
That said you are talking sensible viscosity and not 5w30 or the like.
Would I be correct in thinking you were not using a standard oil pump in the V8s that were being raced?
Regards Bif

HI Bif, the Ford and Chevy big block engines we used were dry sumped due to the effects of cornering G force. At that time, a fully gated and baffled oil pan just could not prevent the oil pickup from being uncovered on long right hand turns (European circuits being laid out in a predominantly clockwise direction). The stock pumps remained in place, to back up an additional external pump, but their roles were reduced to a pan scavenging pump as opposed to the primary pressure pump role.
Fully synthetic oils have a superior film stregnth for a given viscosity value and in choosing a viscocity of 10w50 I have sought to provide an oil that not only has superior lubrication properties but also retains its viscicity value for a longer period and also retains its viscocity value over a far larger temperature range.

Thank you! But which bike do you mean?

With every old motorcycle there is a story to be told!? But i was not expecting to hear the history of my particular VF1000 for sure!!