I bought this 1987 boldor a few months ago from jnj in liecester, he had initially bought it as a non running project and was planning a front end and swing arm swap, but due to another project coming his way he decided not to continue with it,
My plans are to rebuild it pretty much as standard except for a linked braking system.(dont ask me why :o)
The bike runs and sounds ok and has decent compression so im not planning on any major engine work, initially it had some electrical gremlins, it would run for about 10 seconds then blow the main fuse. on inspection i could see that the wireing harness had had a number of alterations and repairs, so i decided to change it along with the rectifier which seems to have cured the problem.
Bif has kindly sorted me 99% of the fairing panals,
So, other than a rear shock, wing mirrors and a few other odd’s and ends its mostly cosmetic’s… frame came back from the powder coaters yesterday, normally i use Triple S powder coating, but this time i decided to give LSN in castleford a try, they are more local, glad i did, the finish is every bit as good as Triple S but half the price, Frame, side rail, triangle brackets, center and side stand £110 all in, that lot would have cost around £240 at triple S, 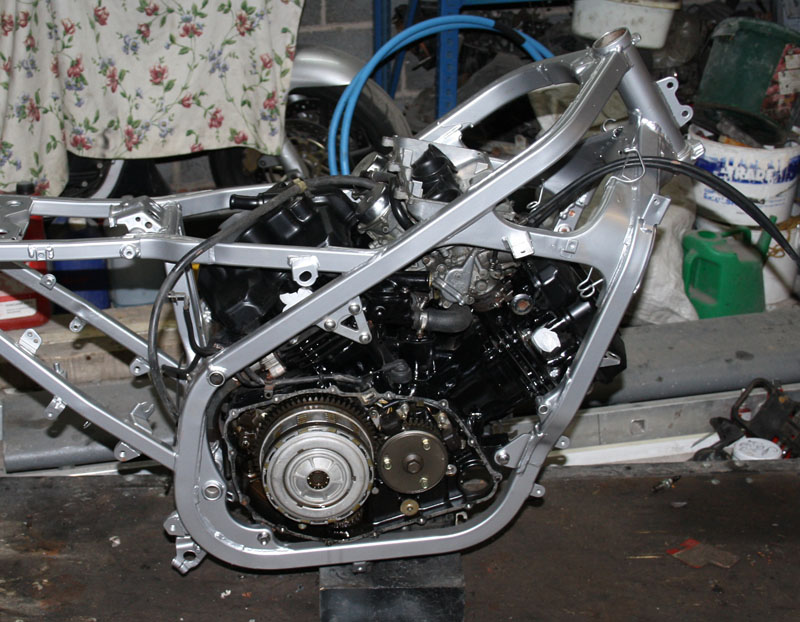 Looks good Pete,it makes a real difference when you find someone who you can trust with these now hard to find parts knowing you will get a useable item returned to you.
Give the guy a shout out and let us know where to find him.
Regards Bif

Well done Pete, you’re a glutton for punishment. I must finally take my old FF apart this winter and give her a birthday so if my local coater can’t handle a large frame then I’ll give you a call.

hi martin, you seem to have caught the restoration bug since you started on the vf500, i certainly think your vf1000 will look better for it… and you also need to fix that oil leak before may…
Not sure how or where to do one of these shouty out things so, LSN powder coaters, located in castleford, west yorkshire, they are the dogs bollocks
www.lsn-coatings.co.uk

mean while, ive been hanging a few more bit on the boldor, 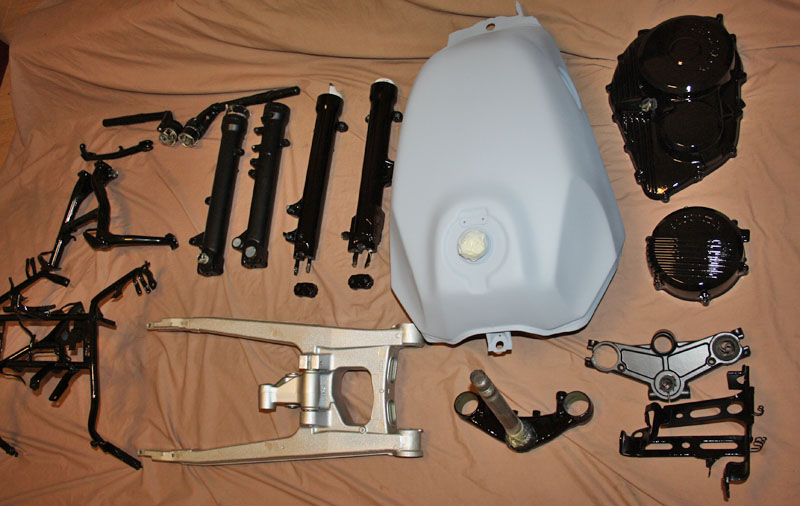 Cheers Ivan. . Still lots to do…

cheers windy,
finally managed to get the yss rear shock resprung, the original 60-180-200 spring was too stiff for me, firefox fitted one of there own springs, apparantly this one is approx 160 strength which feels a lot better,

been hanging a few more pieces on,

Looking really cool Pete. That’s a serious workshop you’ve (now ?) got there. Make sure Santa doesn’t trip over it when he brings all those other parts you need for it.

hi martin,
Workshop, i wish, no still working out of the garage at home, still having to put everything away when ive finished so i can get the van back in at night…
May be next year for the workshop, i should be taking a leaf out of windysolar’s book and building myself a nice big shed in the back garden.

Back to reality and time to update this thread, progress from christmas till now has been very slow, i hit a number of mechanical problems all of which could have been lessened had i done things differently from the begining.
After getting most of the mechanical bits done and hung on the bike i decided to change the oil and filter, bearing in mind that i had test run the bike upto temp on a number of occasions with the old oil in with no issues,
i was a little disapointed that when i started it up with the new oil in, clouds of thick blue smoke coming from the exhaust. After checking a few easy things i decided to remove the collector box to see if there was any unburnt
fuel or oil in it, as i did two spots of oil dripped from the rear down pipes, “ooo bugger” i though, valve stem oil seals, so engine out, heads off, sure enough the once dry exhaust ports were now blathered in oil with clear signs
of oil streaks down the valve stems… had a quick look down the cylinder bores, they all looked good with no wear or scoring. So changed the stem seals, new head gaskets, engine back in, re started the engine, clounds of blue
smoke from the exhausts again. At this point i was getting a bit pee’d off with it and decided to leave things for a while, after a day or two i came to the conclusion that even though the engine had good compression there must
be either a mark in the bores at the bottom of the stroke or the oil rings must be knackered, so, out with the engine, full strip down, pistons out… sure enough the oil rings were siezed in and the compression rings were only just
within the service limit, which was a little disapointing for an engine that has a documented 14k on it.
A quick phone call to bif to check the availability of his piston ring sets, luckyly he had a set in stock, three days later i was installing them on the pistons and rebuilding the engine, first start up after this rebuild was worrying
as it appeared that i had swapped blue smoke for grey smoke, this turned out to be an issue with the carb settings…
I’m about 97% sure everything is mechanically ok now.
So today has been a productive day, managed to get most of the bodywork into primer which im well happy about, rubbing down and repairing body panals is absolutly soul destroying,
and theres so much of it on the bol, fitted new stainless steel pistons to all calipers yesterday,
Big thank you to bif for sorting the piston rings, caliper pistons, and a nudge in the right direction reguarding carb settings Respect for your tenacity Pete. Looks wonderful now. Keep it up.

Those fork sliders and calipers look just like the ones on my VF500 bikes.
Never knew they were common (if they are).

managed to get some spraying done over the last week or so,