I have been running my 1987 F2 with new Denso plugs for 5k kilometers. The bike was notoriously hard to start on cold since I bought it, little puff of black smoke at the red line aswell. Plugs had chocolate center and black outside so running a little rich.

Upon investigation I have found that previous owner fitted different fuel pump, hard to say what it is. Two straight 10mm fittings instead of curved ones as OEM. Plug looked untouched. I had another OEM working fuel pump which I installed and the bike is easy to cold start now. And felt more powerful and wot. My conclusion - too much fuel pressure causing carbs overflowing.

I did couple hundred kilometers and noticed significant hole between 4 and 6k which was not present before. I inspected the plugs and found out that front left cylinder is nice and chocolate all around while others are white.

Can I play with pilot screw first or just pull the carbs and recheck the float level? Mind you I had the carbs done by a shop right after I bought the bike. I check the carbs and they are synced properly, valves adjusted 2kkma before

Do you think the float level has changed in the last 5k Kms?
The fuel pump would only flow fuel until the carbs shut the supply off,did you have fuel on the floor when stopped?
Pilot circuit only affects the first 1/4 throttle so probably will not alter the colour of the plugs unless checked after ticking over for a while.
And you have a red line?Mine has a rev limiter,you can use an MJ4 igniter unit to give you another 500rpm

I do not think that fuel level has changed but if the pump pressure actually overflow the carbs (shop said all valves were shot and they replaced them) wouldn’t it make it run rich? And now when I return to stock I have lean condition? Bike smoked black at around 10k rpm before, now it is clean exhaust.

I had fuel leak from one of the hoses right by the back carburetor set which I could not fix. It developed after about 4kkms and was getting worse and worse. First a small drop, then a small puddle on the engine block. New clamps and hoses did nothing. I changed the pump to OEM and leak was fixed.

It could be pilot circuit issue. It is like I have to open 1/4 more throttle at 4-6k rpm because if I just feather it the bike slows down. All jets in the carbs are stock F2.

I have never checked if this bike has a rev limiter. I shift at max 10.500 indicated on the gauge and I do not have any external one to double check the value. My F1 has very brutal cut off (like 3 seconds!) and I never hit one on this bike because I want to avoid that weird feeling. I will check that.

I also notice that when I run low on fuel that problem gets worse - I have to open throttle more to get the bike going.

Fuel filter has around 6-7k on it, fuel flow seems good even though the fuel tap does not seem to have any difference between reserve and on position. And somebody definitely did some work on it.

I have another development. I blew on the fuel line both in reserve and on position. Seems like on position is really hard to push air through.

I am driving the bike in reserve position and now it behaves as it should. I do not like the plugs though.

I am in Netherlands at the moment, spark plugs got yellow which I assume is caused by fuel additives here. And I get about 5.5liters per 100kms while doing 80-100 km/hr which seems pretty low. 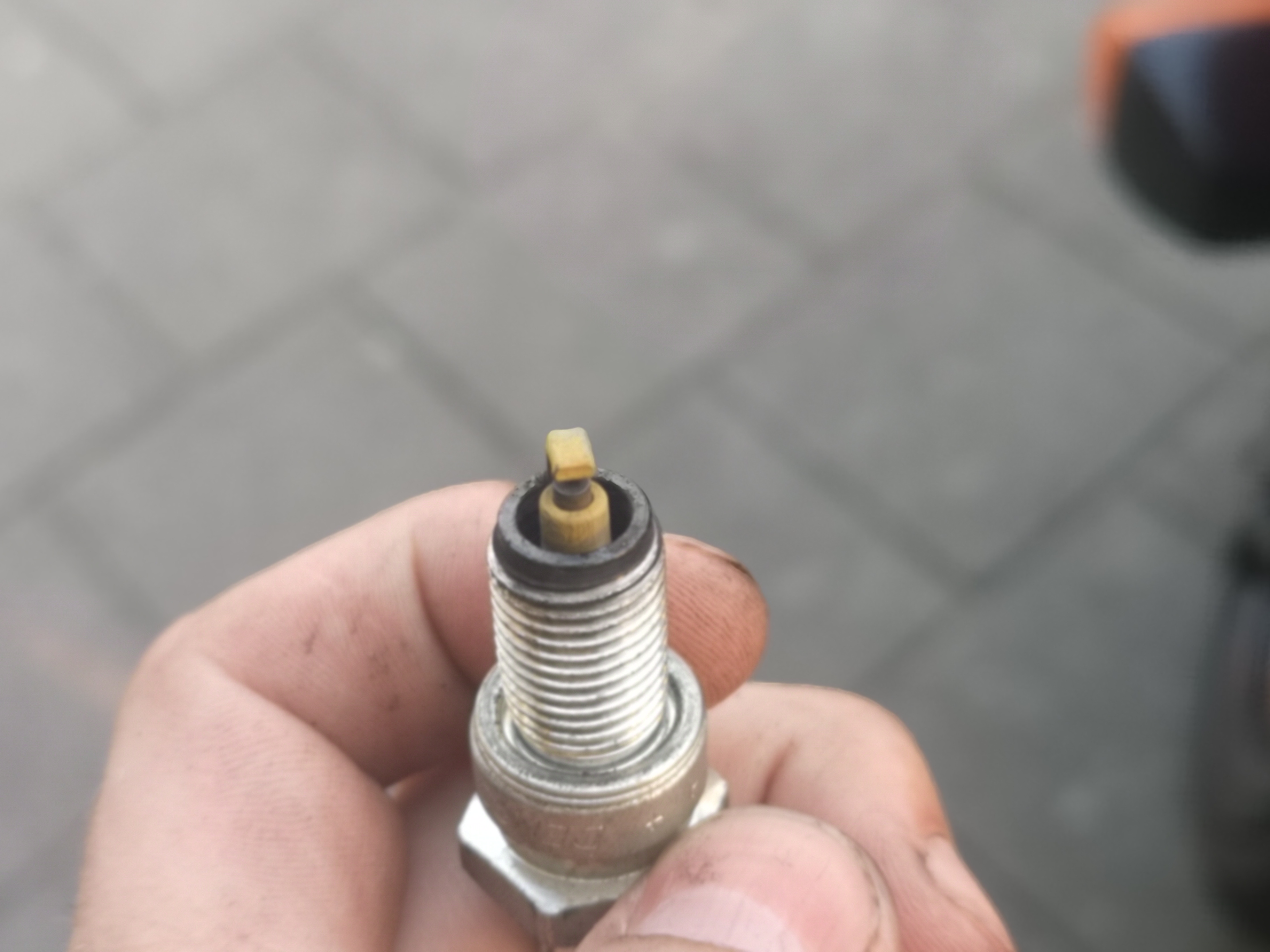 Furthermore the bike developed strange oil consumption issue. When I release the crankcase vent I can do 400kms and no oil consumption. After the bike starts to use even 500ml per 500km which is weird. No smoke. Any thoughts?

A blocked crank case breather can result in high oil consumption. I’d be looking at that before anything more labour intensive.

Any mechanical issues like piston rings or valve stem seals wouldn’t result in an intermittent high oil consumption, it would be constant.

I clean crankcase breather religiously. It is clean. When I just cruise the bike it does not use oil

I have installed another set of carburetors on the bike recently. I have noticed a black residue on front left cylinder intake channel. Looks like the combustion chamber is not perfectly sealed when the combustion happens. All others were fine, super clean.

Does this mean I have a bad valve or bad oil seal? Or maybe piston ring issue?