Hi guys, looking for some experienced direction on re jetting my 84 vf1000fe , i have fitted a k&n air cleaner into non modified std airbox , and i am about to fit sports mufflers to std exhaust collector, will i need to re jet and if so any ideas on sizes? Mains and pilots?

I just got done rejetting one of my VF1000R with K&N in unmodified air box (snorkels in place), Kerker slip-ons to stock collector.

Starts easy, runs great and pulls strong. I originally did not go up on mains, but I had to. There was a stumble under wide open acceleration. Could probably even take a 132 or 135, but man it’s good and I didn’t want to worsen fuel economy.

Thanks bud, i did put a kit through a vf750 i had a couple of years ago and i think i have some needle shims left, the jets i might have to get. So front and rears carbs the same? I thought the rears run a bigger jet to keep them cooler?

Yeah huge Difference in jetting , so maybe i should have first mentioned i was in Oz, so do you think seeming the jets are already on the large size they might not need changing? I remember the vf750 i put a sigma kit in was thirsty as!!! Maybe ill ride it for a bit and check plug colours ( thats when i get it on the road) 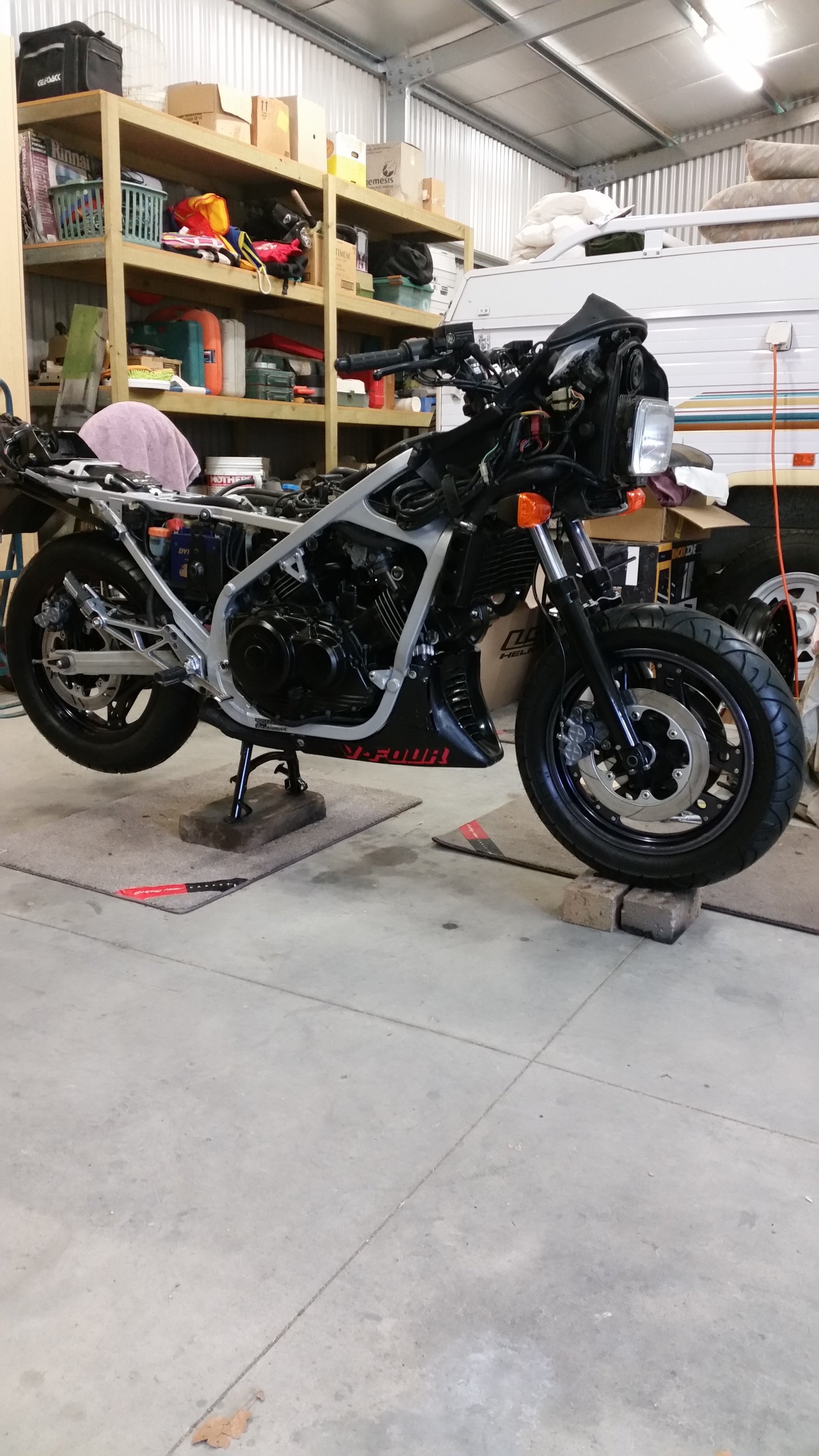 I’ve had aftermarket cans and a k+n air filter on my fe in the past and never felt the need to re jet, but never felt any increase or decreases in power either, so maybe I’ve missed out on something,

Hi pete, yes they do vent back into the alloy section of air box, yeah cool im not really after more performance just want a bit more noise, just love that v4 sound and want to share it!!!

If you do go into the carbs, I would at least go up on the pilot to a 40. They do like that.

Just removed my DynaJet kit, back to Stock Jetting.(84 VF1000Fe Cdn).
Also now have stock air box.
Could never get the DynoJet to work right, but then I ride from Deserts to Glaciers, air filters get dirty, good/bad weather,… damn jetting is always off.
Though I was doing it right, and even using a Carb Sync tool with real Mercury (nasty stuff).
Also note (in this bike) the longer springs are for rear cylinders.
But as for Jet Sizes (!?!?_;

Found another problem,… the rubber venturi tubes in the Carb Plenum, had Shrunk!
They are sposed to seal between carb & plenum, but was leaking.
So, dunk’d’em in grandma’s recipe of Xylene & WInterGreen Oil.
The Xylene swells the rubber and the Wintergreen restores some lost rubber goodness.
Got them back to normal sizes (2hr dunk each).

Still get a little stutter, but pulls Much Better overall.
Anyone gots a good recipe to set the low speed needles?
I’m at 3300’ and set them for 2 turns, but goes off Choke quick (too rich?).