I have an 84 VF1000F and would like to put a frontend from something newer on it. What is the recommended donor bike/bikes?

Having fitted emulators and linear springs I’m happy with the suspension but am always looking at ways to improve the brakes.That would normally be the main reason for changing the front end but in the pipeline are a set of brackets to fit CBR900 4 pot calipers to the standard forks.Initially they will be for 296mm discs(CBR1000F etc) but with the option of 310mm floating discs from EBC later.
Obviously the more sets I have made the cheaper they will be.

Hi bif, as discussed earlier, I will be in for a set of those

Count me in too. Thanks bif.

Thanks chaps,I’m after two sets myself plus Johnboy is after a set for his Bol.
Five sets is a good starting point

Hey Bif put me down for a set on my FF as well, my set up is about as good as I can get it and would like an improvement. What year caliper would I need? I take it the Anti dive would be bypassed?

No problem Drew,the aim is to use the original mounting points,that would keep the anti dive in play.As for the caliper either the early model 900/firestorm/600fi caliper or the later 900/SP1/2 as Pete has fitted will work,the mounting points are the same.

Thanks guys for the information about the brakes, but I am looking for replacement of the forks and triple clamp. I have had issues getting parts, seals and bushings, and wanted something newer and easier to find parts.

The length of the steering stem is the main problem when looking at a swap,more modern machines use a much shorter stem.
CBR 1000 F forks are a straight swap,CBR600,VFR750 and VTR 1000 forks all fit but are almost 50mm too short.
All the above bikes use the same seals as the VF and bushes are still available from Honda as well as all balls and pyramid parts. 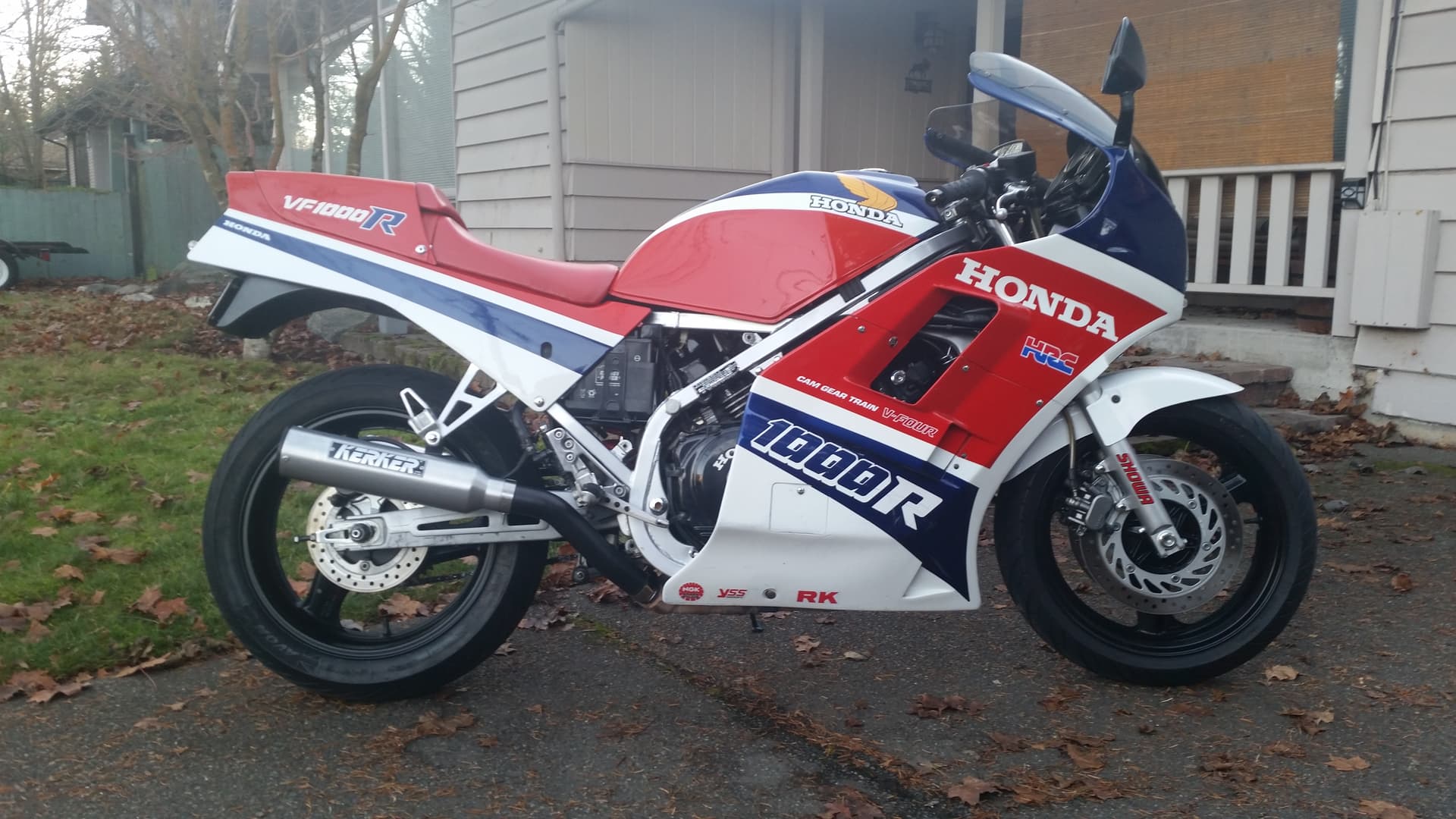 Might not be a quantum leap in upgrades, but they are cartridge, got rid of TRAC and uses larger rotors. Allows me to use the stock bars and triple clamps too. Plenty of used parts out there as well.

They would work no problem on a VF1000F. Here’s stocks forks (RT springs and Emulators) already slid up 30mm for starters. Likely going 20mm+ more to get the front even lower. Plenty of room. 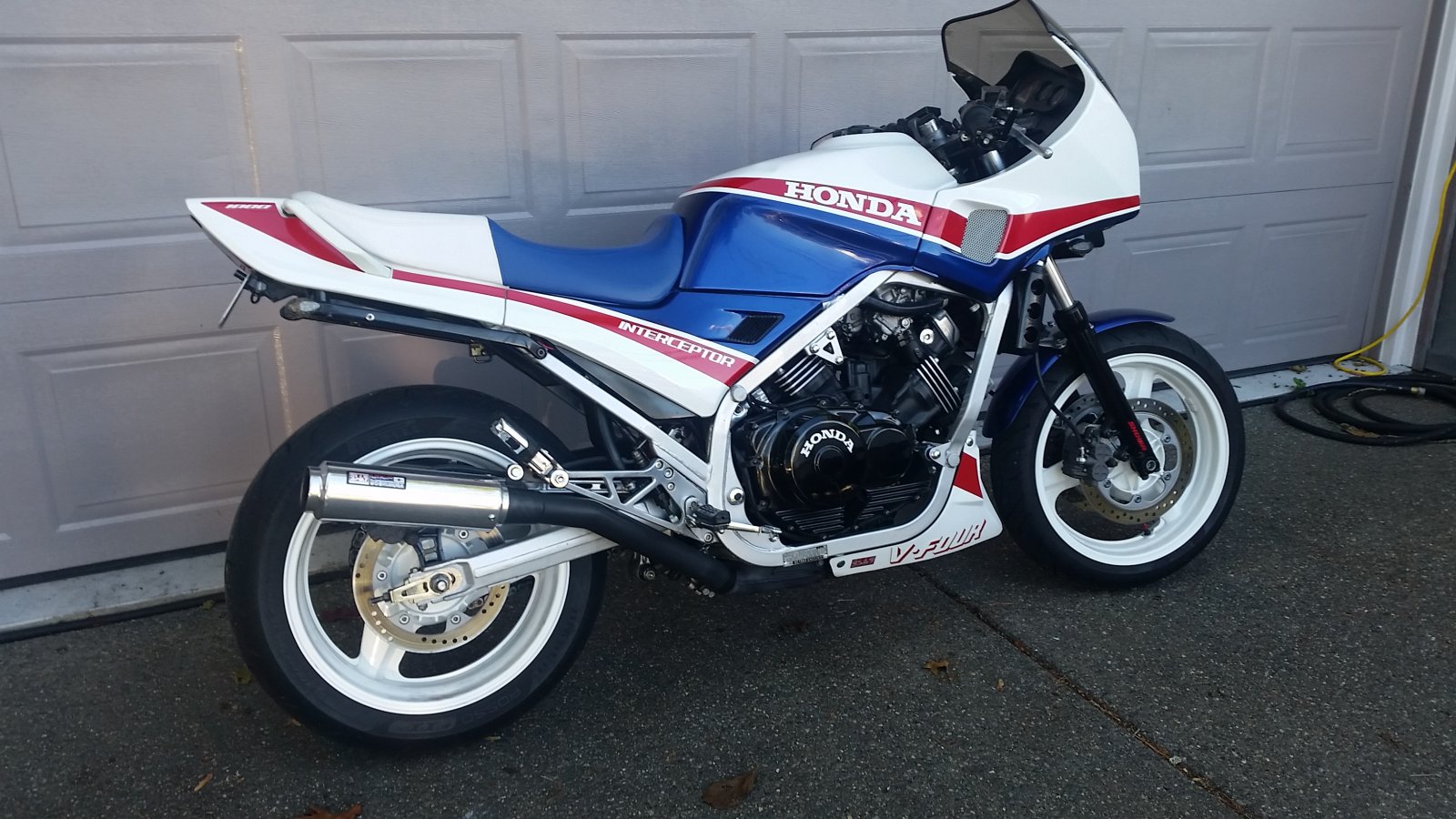 Now that being said, these re-worked stock forks are working really good. I decided on that route because I wanted this bike to retain a more “stock-ish” look even with a wheel swap for radials.

Do you need to change the rims to fit radials?

I had a pair of Michelin radials on my first FF back in 1988; they were fitted to standard rims.

150/70 fits the rear rim fine and a 110/80 on the front,both sizes available in Radials from most manufacturers

Sorry. I should have said “Radials in the sizes I wanted”. Wasn’t interested in those, but I’m sure they work fine.

I personally don’t like the profile of a 150/70 on a 3.5" rim, even if it “fits”. And I have plenty of bikes with 16" fronts, wanted to do something different up there. We didn’t get any other size front wheel in the states.