As far as I know, my bike is on first over size Pistons. No other real tuning has been done, Jets are standard but there is a K&N filter.

My seat of the pants Dyno tells me it makes much the same power as my old ST4s after it had a
Power Commander setup, making about 120 hp at the wheel, with about 78 ft lbs of torque.
Does that sound reasonable?

Has anyone done any Dyno work to establish real horse power figures?

Hi there,
I took my vf1000 intercepter to dynobike in Malton here in the uk, I had built the bike up from a scruffy looking monster so when it was done I wanted to see if the power still remained with it at 29000 miles. It was running great with no noises or smoke so all was looking good from my garage, on the dyno it picked up really well and sounded fantastic and at the end I was anticipating the outcome and was expecting a bad result, however the old girl was still pushing out 99bhp at the rear wheel so thats not bad for a bike that is advertised at 116 bhp from the motor, taking in to account the 10 percent loss in the drive train and the odd 29000 miles I was very happy with that, if I can find the print out I could put it up if anybody is interested to see it.

What was the torque like?
Mine certainly feels very similar to my 996 engined ST4s, which made 113RWHP but with 78ft lbs of torque.

Hi Mate,
I have found the dyno print out for the vf, note the top line, the book torque states 63lbs the dyno reads mine at just over 65lbs.
The peak horses is down at what I remembered at 97 but still good as I have just read that the early fe or interceptor starts life with 113hp.
Also note the top speed of over 140mph when he shut the throttle off! I reckon it had a few mph left (not that it matters) but it just shows that these engines stay good and strong over the years (so long as the cams dont melt away) and with care and attention they can be kept for years to come.
Cheers. 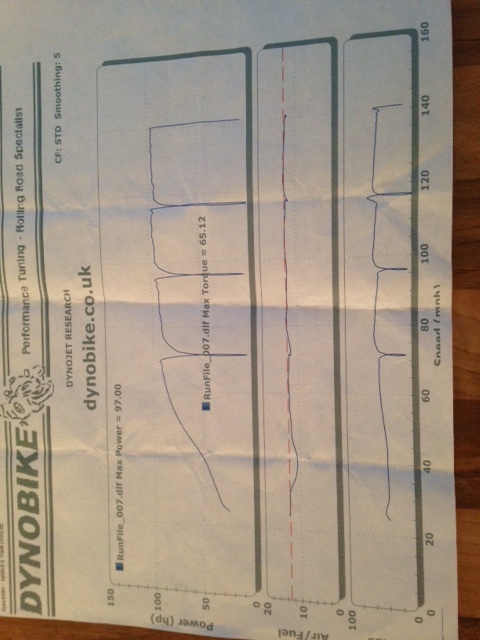 Mine has had a fair bit of engine work done, but more on the blue printing end of things than tuning.

It has a polished crank, balanced with weighted and balanced pistons and rods. It also has first oversize pistons so I reckon it is cheating a little bit, maybe nudging 1037cc, over the 998 of standard.

It feels very strong and as I said, is very reminiscent of my Diucati 996 desmoquatro engined ST4s. That had a filter, end cans and custom mapped PCIII with the aim of smooth delivery. 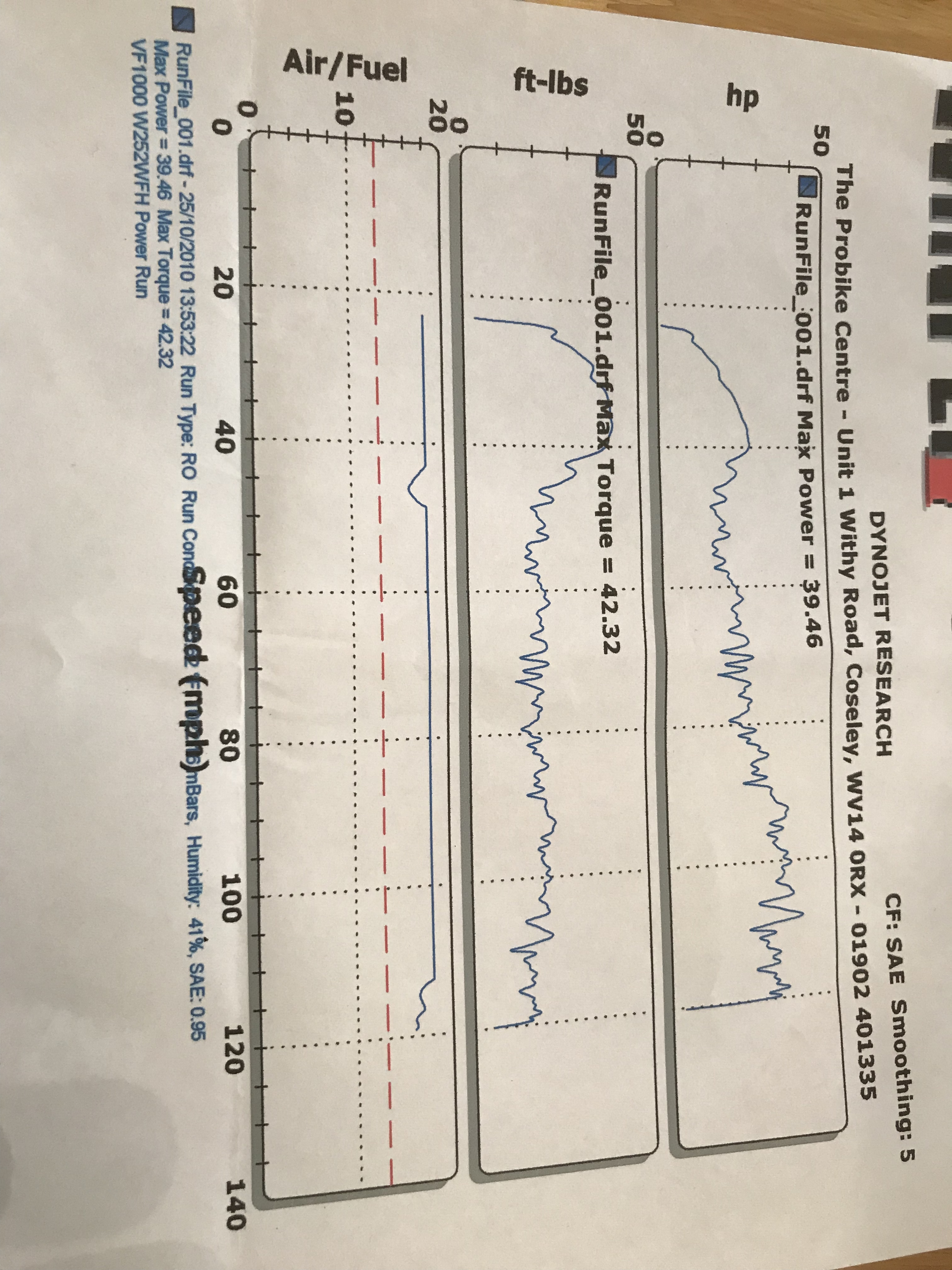 This was a poorly VF 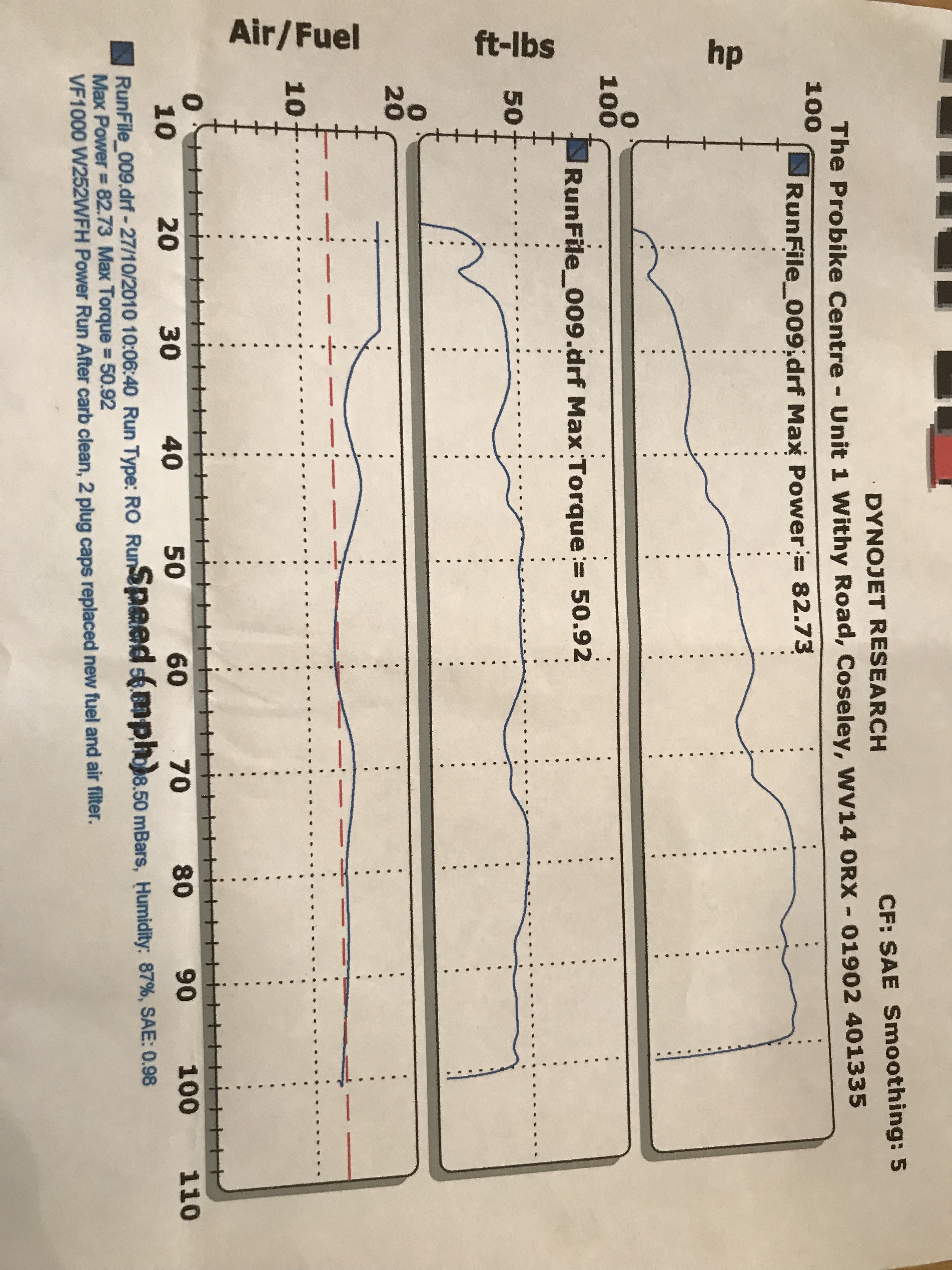 After some minor repairs 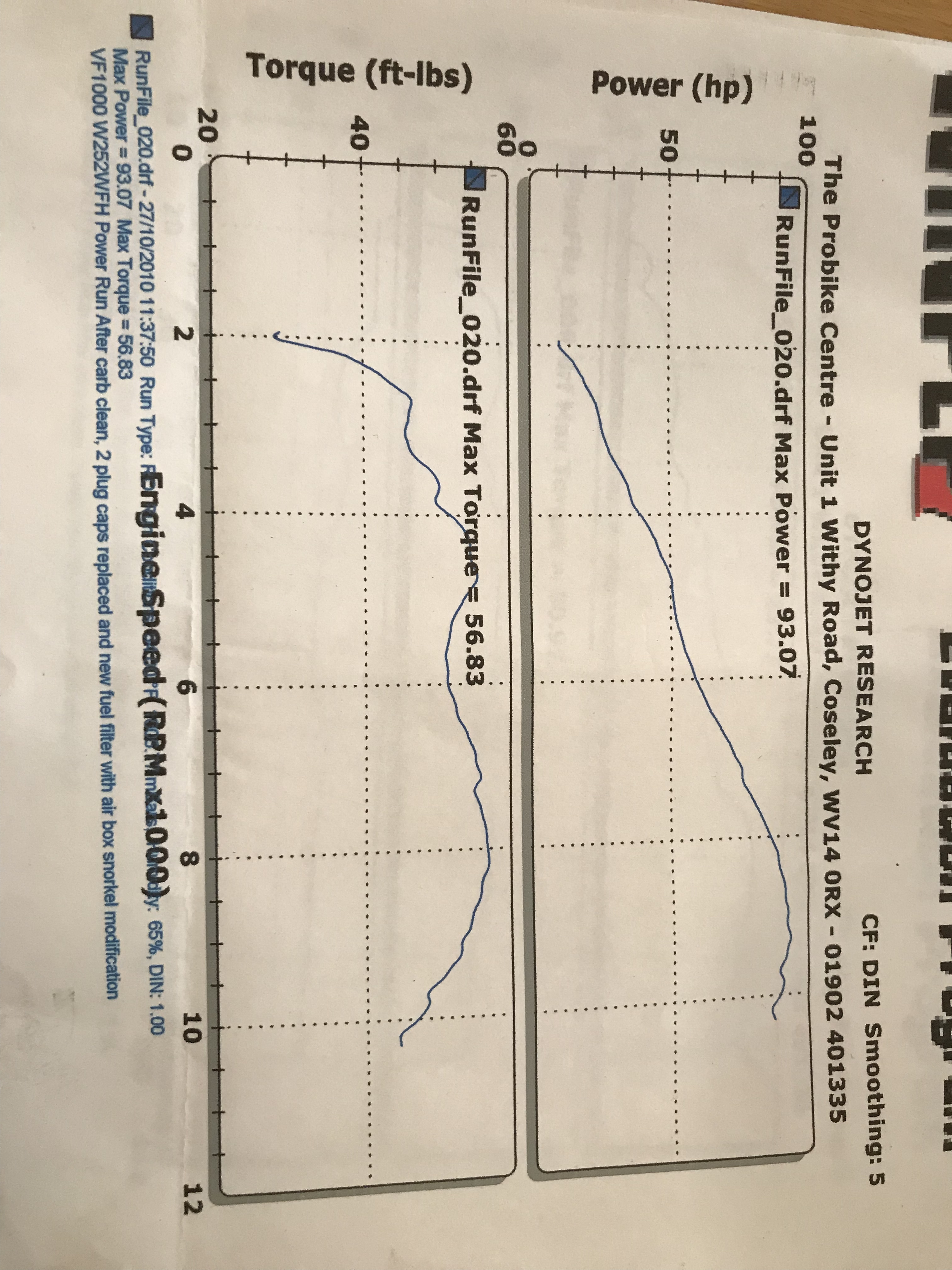 After a mod to the air box snorkels another 12.5% power and 11.5% torque!!!
An otherwise standard motor with 23k on the clock.
A worthwhile mod I would say only problem is I didn’t get the air box.
Any ideas guys?
regards Bif

Other than removal can’t think how they could be modified, have seen airbox with holes drilled into lid but was dubious about it making any improvement due to tank covering airbox lid. Worth removing snorkels to see if it improves things though.

hi gary, the airbox on the project R had had both its snorkels removed, F1 un-baffled pipes and the carb needles shimmed up with washers, I never got chance to ride it like this as ive returned it back to standard tune for now.

I’ve got the dyno jet kit installed so can change needle height with no problems so I’m considering removing snorkels as it can only help air flow, much better than drilling airbox lid. Don’t know if I should do this before Scotland as it may make bike run a bit weak.

bit close to Scotland to be experimenting, saying that, ill end up fiddling with the bike right up to the morning we set off

Bike was running rich at hulme end so dropped needles to top clip level and it made a great improvement so have 4 clip levels of adjustment without jet change, still think it’s a bit rich so am going to remove snorkels and take a ride out to Wales and see how it feels, if it feels week I’ll put them back in.

How did your run to Wales go Gary?
Just looking for feedback on riding with no snorkels.
Did you get round to drilling the carb slides after fitting the dynojet kit?
regards Bif

Hi bif, when I checked carb slides I had already drilled them, memory is not what it used to be! the trip to Wales will have to wait as weather is awful, I should have gone last week when it was glorious! I’ve ordered a new petrol tap as mine weeps slightly when moved from off to on so will have to take tank off so I will remove snorkels then. Bike still feels slightly rich so it should weaken it a bit, I will let you know.

Hi gary, regading the petrol tap, cms have them in stock, but the O rings arnt, I have a few on back order, but they won’t be here until 29TH MAY

, I ordered a couple from America as bif kindly lent me one a while ago, should be here in next few days.

Hi Pete I got a tap and gasket from fowlers in Bristol, it should be here tomorrow it was a little bit more expensive than CMS but when you included the postage was about the same.

Fitted new tap and re moved snorkels, much louder! Induction noise increased, it already has a k&n filter that made it loud but this increased it even more. Response above 5k better and did not feel too week, low revs no obvious difference so wound out air screws 1/4 turn and went out again. Didn’t get to test it much as bike died after 1/2 mile! Fuel pump not running. Removed pump and took end cap off, it would run if I moved contact block with screwdriver but stopped as soon as I removed screwdriver, eventually got carbs primed and got her home. Took pump of my 1000f and will try and fit that tomorrow though that is not an original pump either. Have ordered a new pump but wont be here for a few days. Will keep you informed of any progress.

On a similar note, I decided to do the final shakedown run today in preparation for Scottish trip. Filled up with Shell Advance and set off, happy days! Oh hang on whats that smell? A bit like petrol?

So I look down and see fuel dripping off the bottom of the side panel, look higher and see it weeping from the fuel tap. OK drain the fricken huge tank and replace the three joined O ring seal. Happily all seems well, glad it went now and not next week

Fitted pump of F and went out again, didn’t go far incase it died again but felt much better with the 1/4 turn out on the air screw, exhaust popped a little on over run but nothing drastic. Tick over smoother and low range power felt better. In work next 4 days but will try a longer run before Scotland and will leave this pump on and bring new one with me just incase.

And I’ll bring ignition units reg/rec spare levers throttle cable and…Pete! I think we need the support van😂
No seriously I do carry those bits on group trips,they have come in handy before