Hi all,
Vf1000r 85…
recently refurbished and re commissioned after many years laid up. 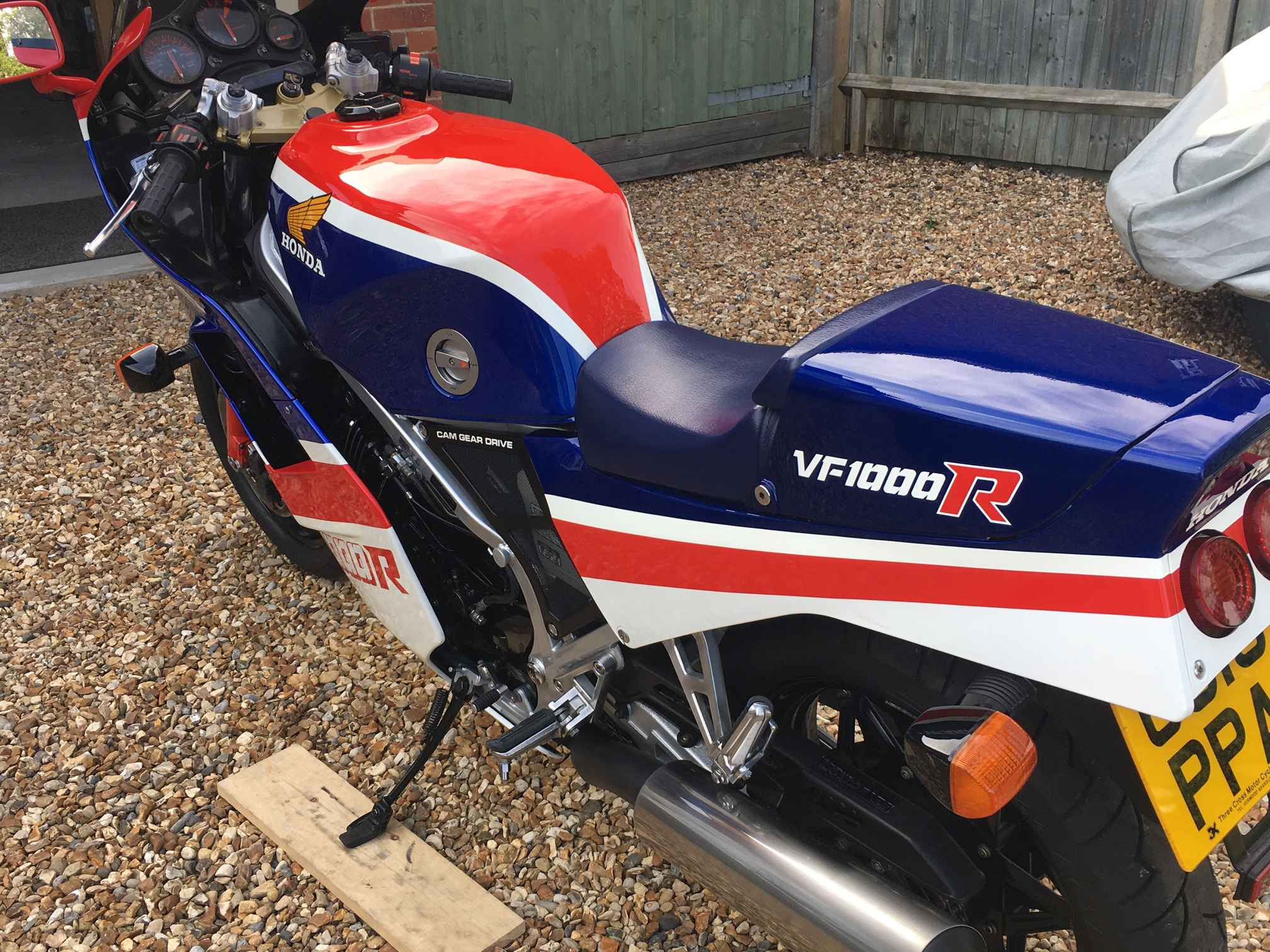 I’ve covered about 500 miles on it this summer and no major issues. However, the front end is wobbly at low speeds say 20 to 50 mph this smooths out at higher speeds? I did change the top steering race as the originals were rusty/pitted. New rubber back and front… any thoughts?
Also, temp gauge doesn’t get much above cold, stuck thermostat maybe?

One more thing… the bike pulls great as you’d imagine but seems a bit tight from 6,000 rpm (in 2,3,4,5) almost like it’s not quite fuelling fully? The carbs were fully rebuilt with new internal parts, jets etc…

Many thanks in advance

Well done & congrats on getting one back on the road. Looks very nice.

Still have an F-- actually 2 lol

I don’t suppose you’ve got a spare fuel tank you’d be happy to sell? This one is ok but I had a nightmare trying to get it clean inside and it has a few issues.

The going straight ride was pretty similar from a suspension compliance pov: but the R got unsettled/wallowing when pushed, whereas the F was pretty stable. I found I could also place the F where I wanted it easier than the R.

I do have a 2nd F tank- but it probably won’t be available for at least 5 months.

Thanks Walter… yes, I did misunderstand the R’s and F’s!
Interesting to read your comments on handling… I love the bike but it’s not one that I feel overly confident on. Still, it’s lovely to look at.

I have been using my RF as my main ride for the last two years.Although I have done a wheel change (2 actually but a long story) I have always found the ride to be solid and accurate.I have a wilbers on the rear and standard front suspension with 10wt oil and spaced to give me the correct static sag.
If the steering is giving cause for concern I would be replacing both steering head bearings.The lower bearing is always under load even while the bike is parked up.I have seen several low miles bikes with indents on the bearing race from the balls just because they have sat in that one position for so long.This may be a factor in your low speed wobble.
Also worth checking your front wheel for true,I had an F2 that would wobble about 30 mph and the wheel had a slight buckle.Your RF is a fantastic bike enjoy

Thanks bif, appreciate your input…
Yes, it turns out to be a slightly buckled wheel, there’s a company in Maidstone Kent that can true it thankfully…

Interesting reading your suspension set up. I was considering an after market rear shock, is the Wilbur unit readily available? I’ve seen a Hagon unit… what is static sag? Excuse my ignorance…

The bike runs and pulls nicely but it feels a bit tight from 6,000 rpm, almost like it isn’t quite getting enough fuel? It does pull through the higher Rev range but not as freely as the lower range… Any thoughts?

I really love the bike… I knew the last owner, it had been stored and of the road for 24 years!

Hi Andy,the Wilbers is available on eBay.de for little more than the cost of a Hagon unit and is I recon a superior shock.I have one on the RF as well as one on my F2.The seller I used set them up to suit my weight and riding style.The RF one was spot on but the F2 unit needed backed off a bit.
Static sag is the difference in height between the bike unladen and you sitting on it in full gear in the riding position.
On the forks with the bike upright on its wheels,measure from the bottom of the lower yoke to the top of the dust seal on the fork lower.
Put a cable tie around the stanton above the dust seal just slack enough so it will move up as the forks compress.
Get on with full gear with someone stopping you falling over without putting any down force on the bike.
Get off and measure from the bottom of the tie to the bottom of the yoke,subtract this measurement from the first and the result is your static sag.
For fast road use I have 25mm on the RF and 30mm for touring on the F2.
The process and measurements are the same for the rear,measuring between the wheel spindle and a fixed point on the frame(not on the body panel)
I would still recommend changing both head bearings too even though you have found a buckle in the wheel
Higher rev problems can be over fueling rather than weak mixture,try a bit of choke at 6k and see if it improves or makes it worse.
What air filter is fitted?An over oiled KN filter can drastically reduce airflow and make it react like it’s running on choke

I did change the head stock bearings during the first round of recommissioning, I torqued down to 20 ft lb as per the manual?

The air filter looks to be the stock item and also looks pretty clean. The carbs were fully stripped and rebuilt with replacement internals. I’ll try out your suggestions when she’s back up and running. Would the main jets already be engaged by 6,000?

Thanks again for your help bif, really appreciate your expertise…

I’m using the 640,the needle is in play at 6k but can only flow what the main jet allows through.