Hello all,
Does anyone know of a specialist or mechanic in my area (Gloucestershire) that could work on the more technical aspects of my VF1000R.
Specifically I have some pitting on my cams and I would like to get the cams and followers hard welded and reworked.
I have found somewhere to do the cams (P Joy Cams) but I think stripping the engine and rebuilding may be a bit beyond my skills so would like to get it done by someone else.
Not sure who to approach.
Any ideas?

Any competent bike mechanic will be able to help you,after all we are mostly self taught on these bikes and they aren’t that complicated to work on

Thanks Bif, can the cams & followers be removed with engine still in bike? I have reset the tappets with the engine in place so know how to get the cam covers etc off.
It isn’t clear in the manual I have as they seem to remove camshaft with engine in bike then rebuild it with engine on bench and I cannot find clearer instructions on the internet.
Do you have a better, clearer “How to” for this task and I may have a go myself!

I have never removed the rear cams with the engine in place but see no reason why it can’t be done.
The manual for the R is a bit vague on the cam set up but a copy of the full 85 US manual makes it simple.
Remove the alternator cover and rocker covers,
Turn engine to TDC 1-3 on the compression stroke,at this point the holes on the LHS of the cam drive gear will all be at the front 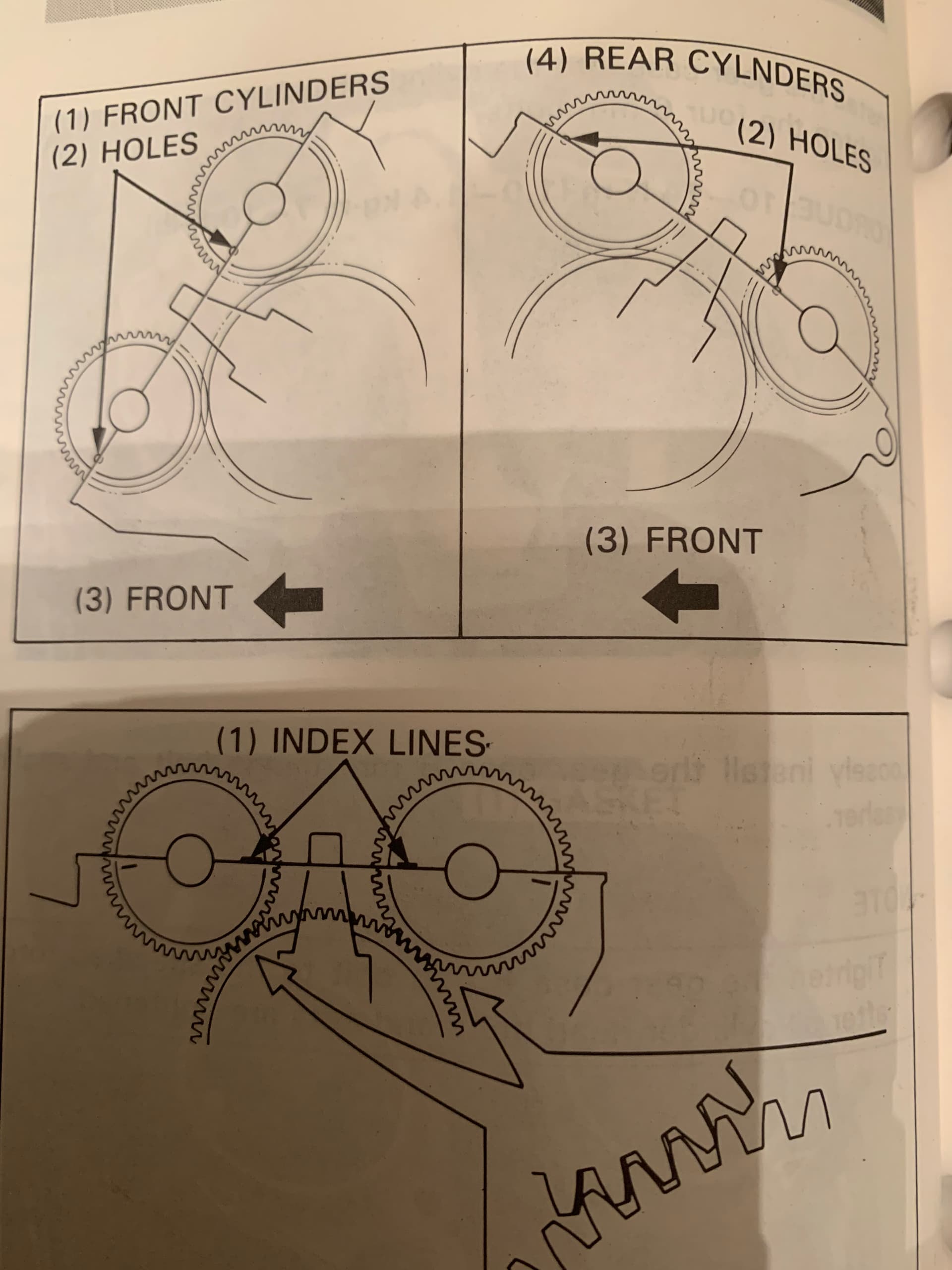 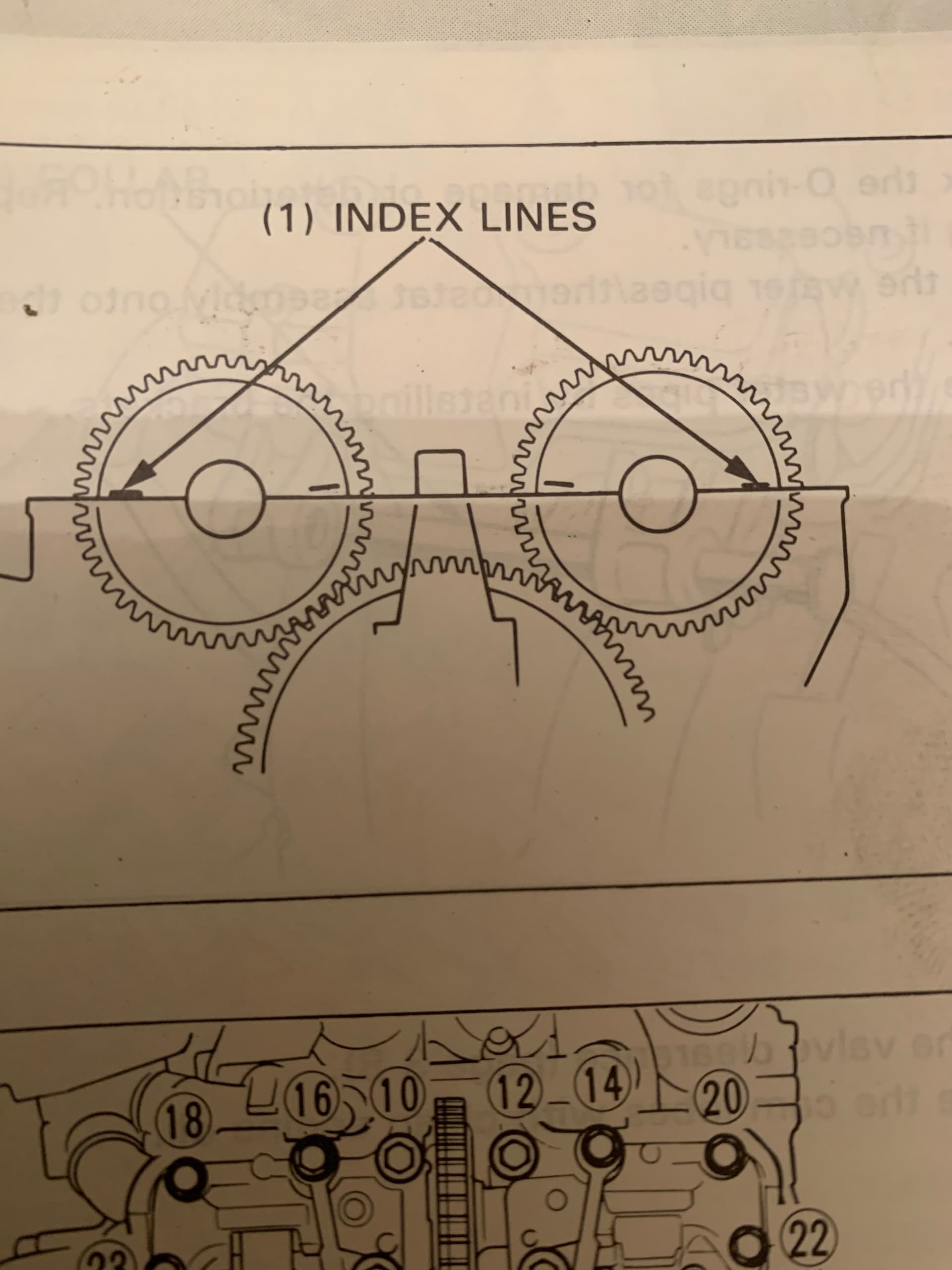 You can now remove the cams and refit in the same position.
I would back all the tappet adjusters right off befor removing the cam caps.
Joy engineering did a set of cams for me,first class workmanship but took sooooo long.
Be prepared to phone him at least twice a week every week until the job is done.
He won’t hard face the cams,that’s not how it works,I went for a 20 thou base grind that gives 12 degrees more endurance and 20 thou more lift just to pep things up a bit,not that I’ve managed to get them fitted yet.

You have already got the expertise of Bif so I wont try to elaborate, but I will say that in the early 90s I did my own front cam replacement and followers on my vf750f when they burnt out but never had to do the rear.
I had a vf1000 a little later and that lost a cam but it went into the local Honda dealer to get it done ( £200.00 parts and labour in those days for 1 cam and respective followers)
I got a VFR 750 after that and never had a moments bother with it.
The gear driven cam VF1000 has got to be close to the gear driven cam VFR 750 and those are still around so any Honda shop should have no problem .

Thanks Bif that is very helpful & doesn’t look too difficult .
My cams are a mixed bag I’ll attach a photo of each below, what is your opinion of condition?

Phil Joy felt the cams would last a bit longer & when I am ready this was his recommendation:-
“ Hi Neil, I can still do that job,pitting isn’t unusual the condition of followers comes into the problem as this is chrome faced.
Sometimes small bits of Chrome flake off and cause problems.
The repair is to reprofile the cams and then cut the chrome off the followers stellite weld the them and leave them plus on height by whatever amount has to be ground from the cams.
Busy at the moment 4to5 weeks shop floor time.
Cost on compleat job £450.00 plus carriage.
Regards Phil Joy.” 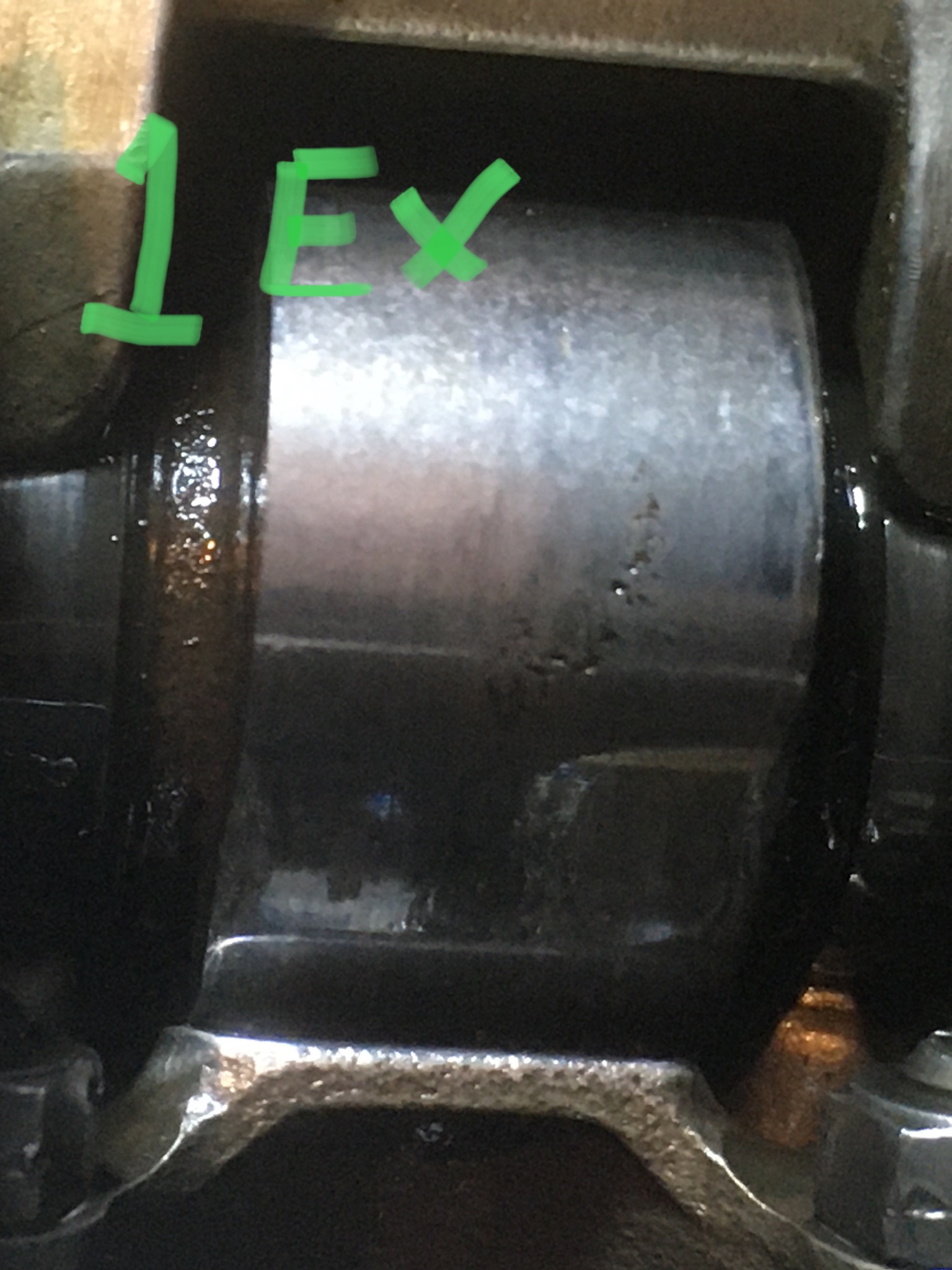 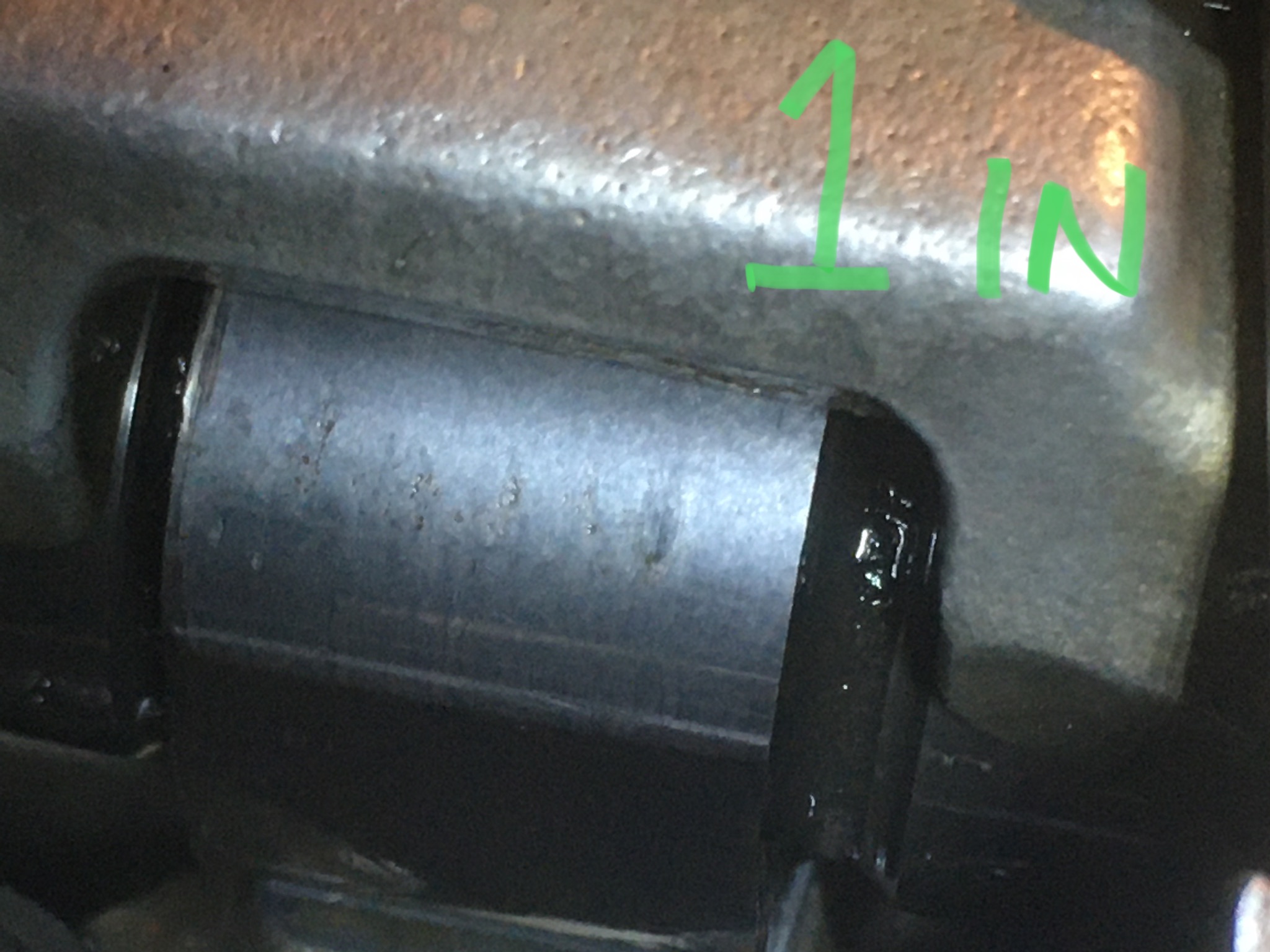 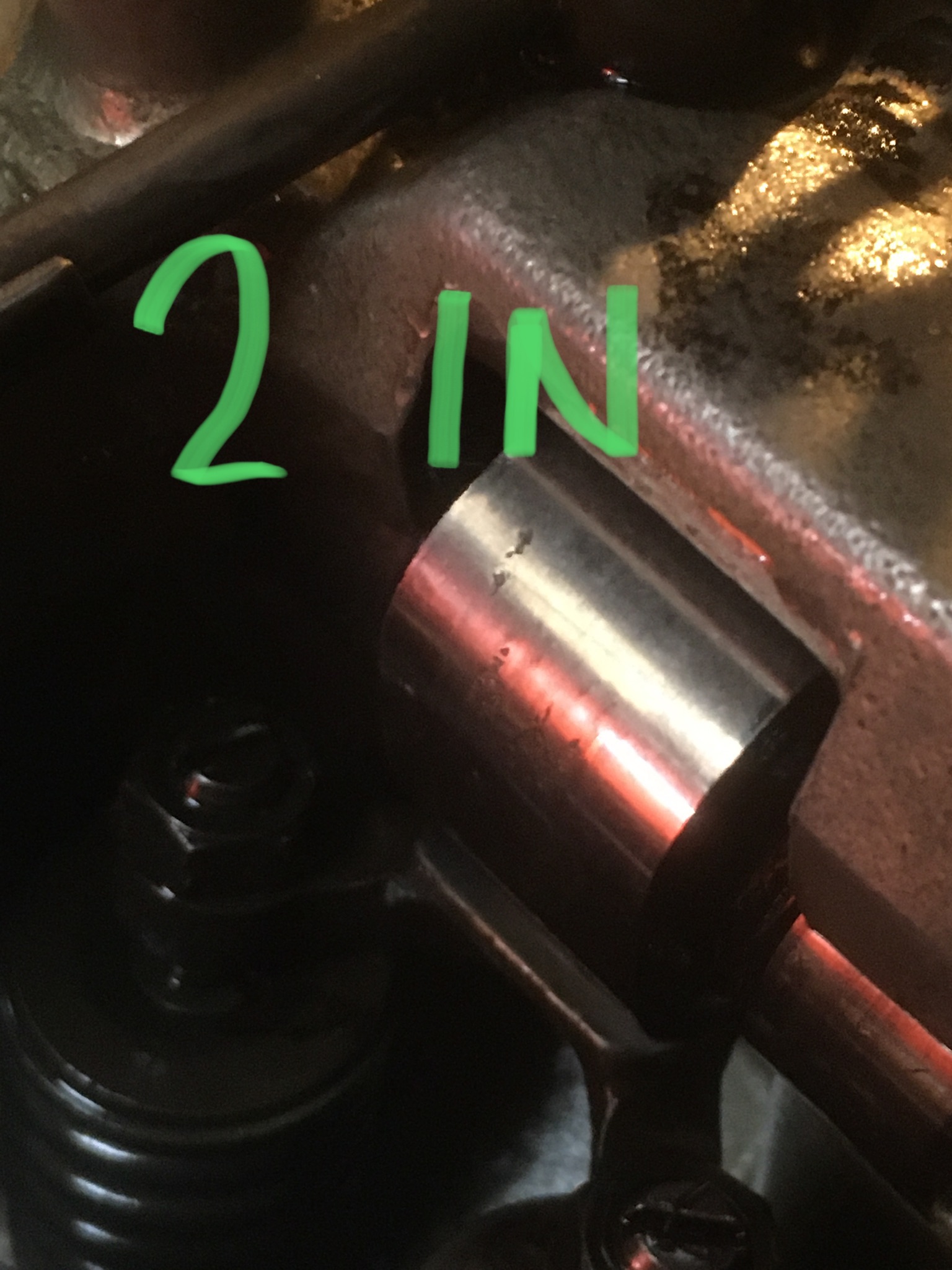 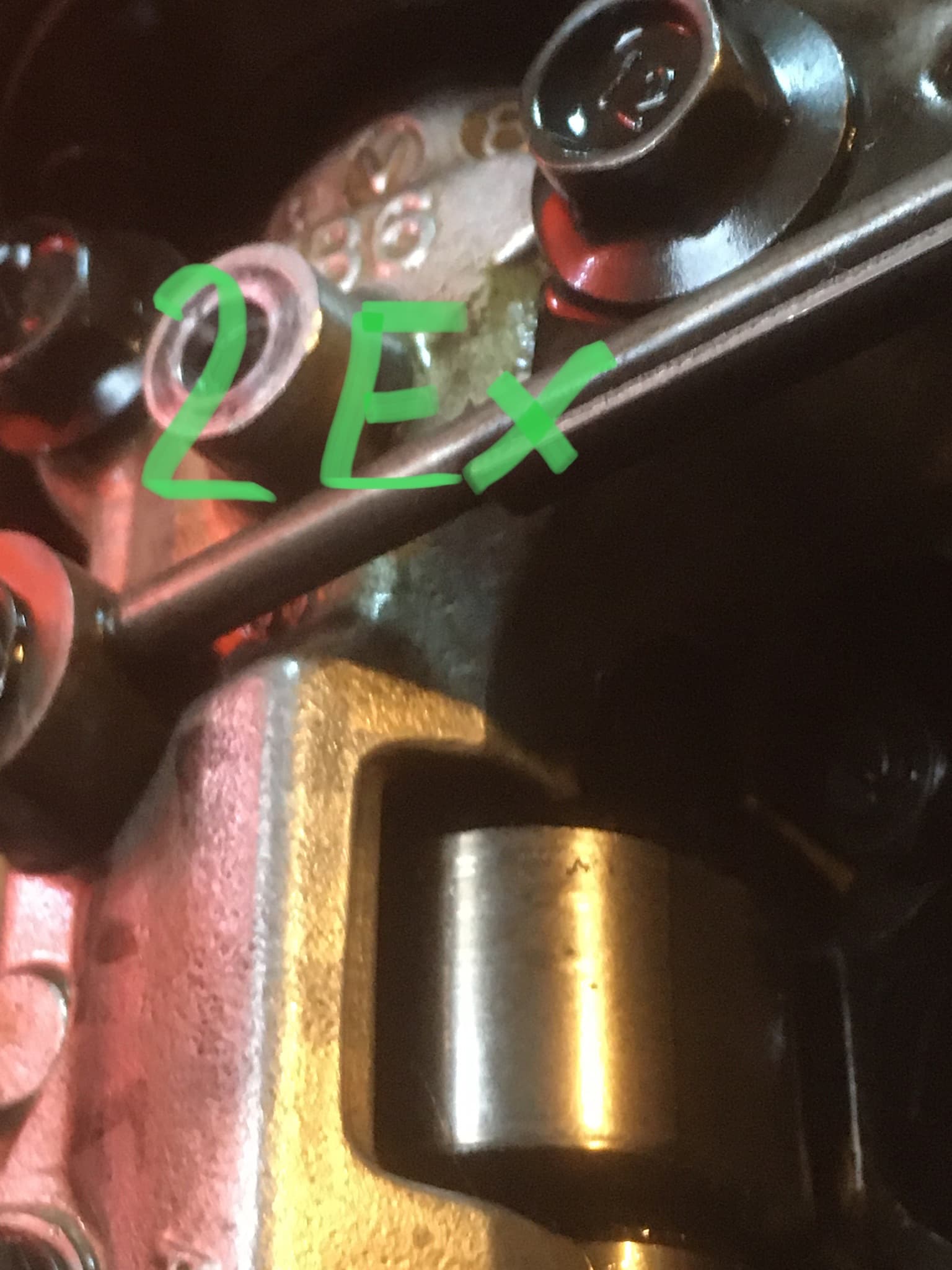 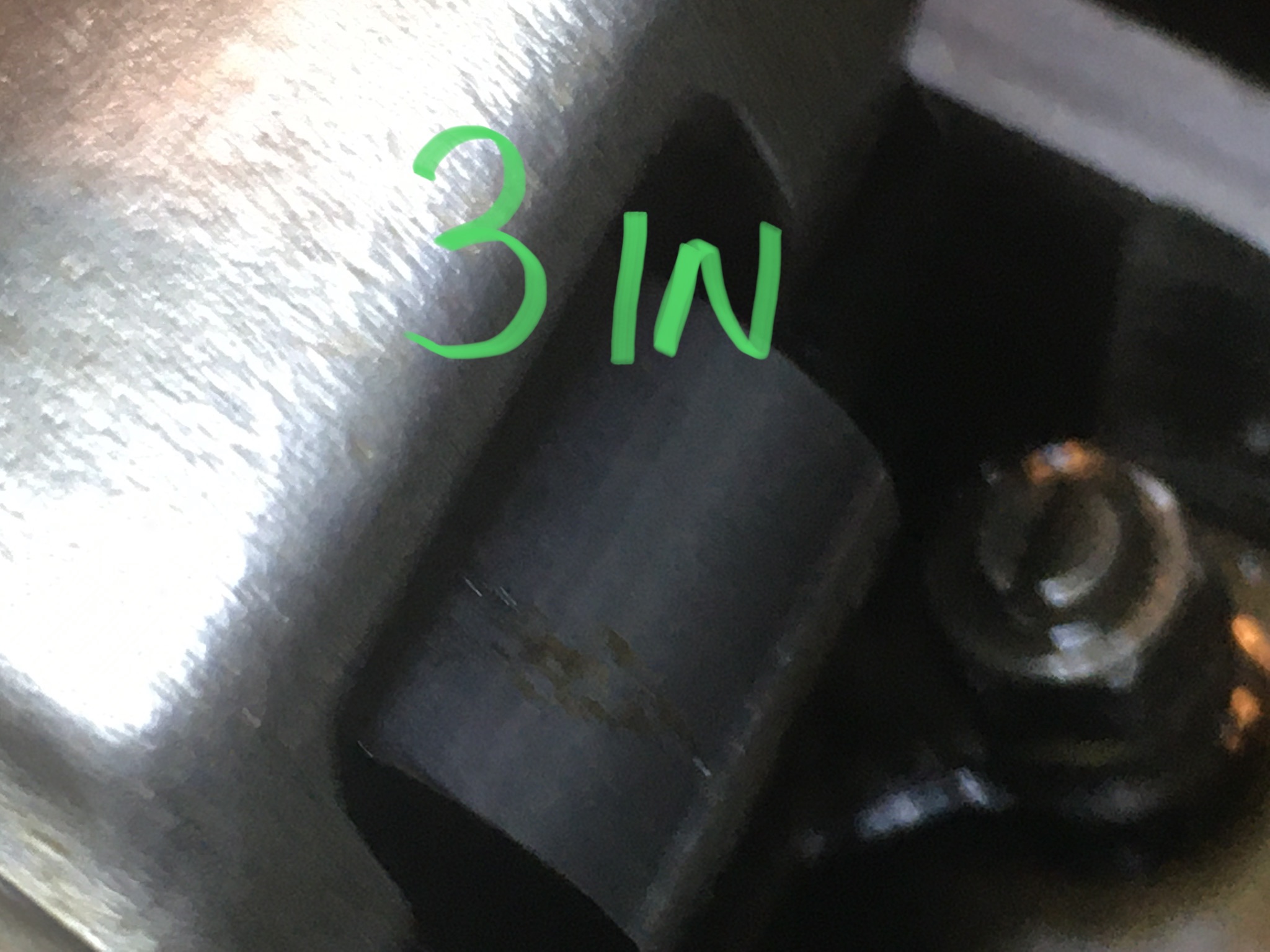 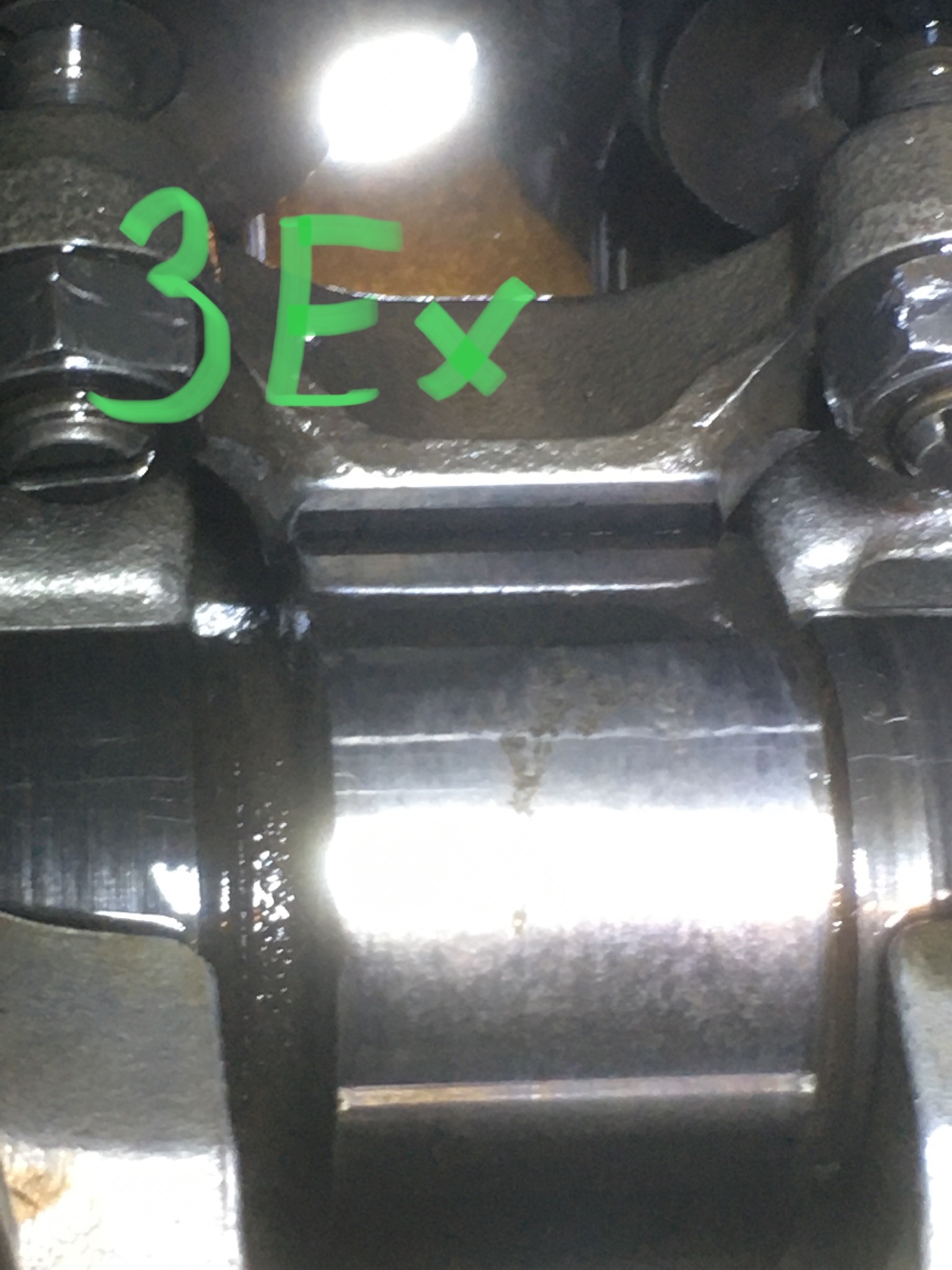 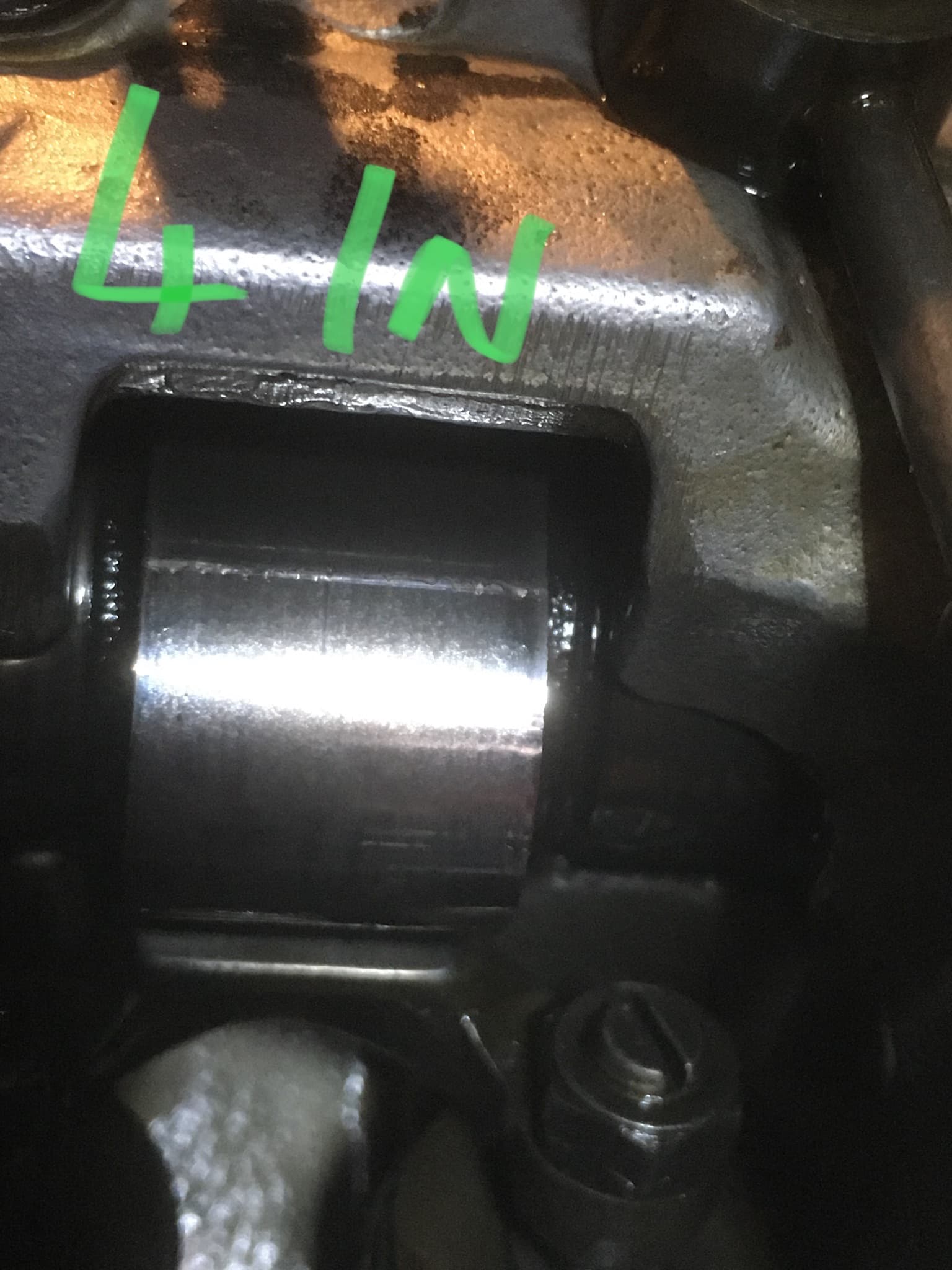 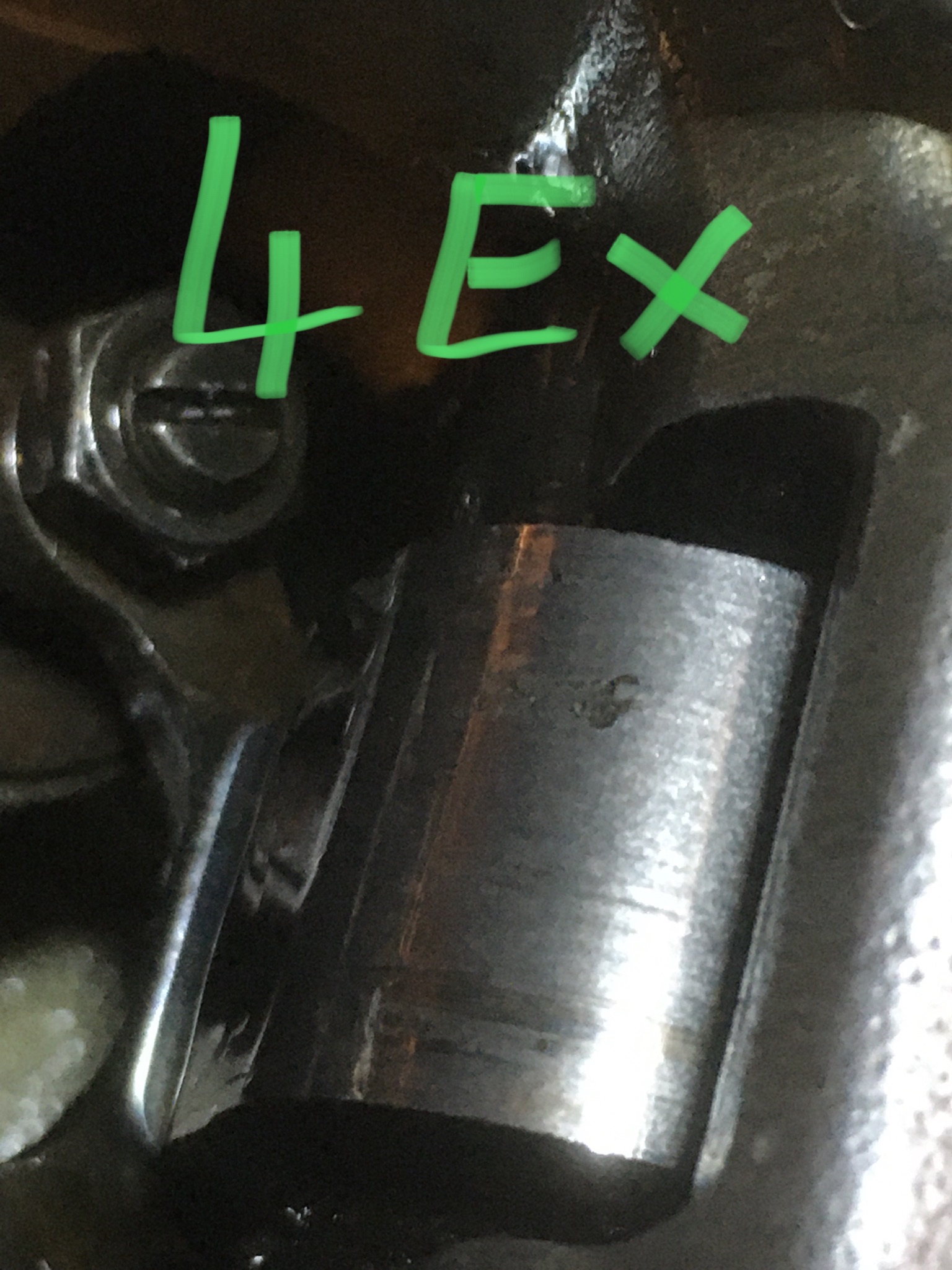 To be honest fry, from the photos I don’t see anything too bad on those cam lobes, if the engine is running quiet I would leave alone… and unless you can make a special spanner I’m pretty sure you will need the engine out to remove number 1 cylinder rocker arms as the shaft bolts are behind the frame rail, everything else looks do-able but probably more difficult with the engine in frame…

Thanks Pete.
The engine doesn’t make any odd noises, the cams just looked a little pitted when I did the valve adjustment. I have seen subsequently that these marks are common with some due to the casting process.
I think I’ll leave and see how they look when I next do the valve adjustment.

Hi fry, yes that’s what I would do, I’m no expert but I think those will last years with regular oil changes and correct valve clearances… just have a look at them every 12 months or so …

Hi guys. The problems will start when the hard chrome starts to deteriorate on the followers. once you start to get hard chrome slivers coming off then they can go everywhere. The sharp edges of the chrome can then catch the pits in the cams and won’t take long to wreck them. Fortunately you can then still get them hard welded and ground to whatever you want. (cams and followers) Hopefully the hard chrome pieces doesn’t get anywhere else that it can do damage. I know that I keep recommending the following website, but he is very knowledgeable about these bikes and he has lots of articles and opinions and general service bulletins that you can download. But the important thing is, he quite often disagrees with others but explains why. Generally he makes quite good sense and he was very much and still is very much involved with the motorcycle industry. www.motorcycleproject.com It is hard to argue with someone with his experience.

Hi Jovimill, do you know anyone who does the hard welding and reshaping of the cams and followers?

I only know someone in Australia that does heaps of cams. https://waggottcams.com.au If your guy in England can’t or will not do the hardening then ask him if he knows who can/will. The important thing is to get the hard chrome off the followers. there are differing opinions on whether the problem is caused by lack of oil, dirty oil or oil pressure. Mike Nixon in the USA believes it has nothing to do with oil. He is a very knowledgeable MC Technician and knows all about these Honda’s as he worked for them in the states. He blames the way that the cams were cast and it was a problem over all the early Hondas. I know that some of the early inline 750 fours sometimes had similar problems and I frequently came across other Honda’s that had the same problem. Read his articles on the subject then decide for yourself what you think you want done. Not getting your cams hardened would still be better than stock but I don’t know what hardened followers would do to softer cams? I have the name of someone in the USA I think who does the lot but I will have to search for his details again. It may be in one of the Mike Nixon articles, I will let you know if I find it. Lots of research before you decide what to do is the best way to go and ask heaps of questions. Pete is right I think you should pull the motor to do it.

Hey Bif, while we are on the subject, is there any way we could compile a list of people to use for different purchases and services or is that not feasible. Maybe we could get all the members suggest people that they use and what for? And tell people what countries. Just a thought.

Mike Nixon also states that it was not only Hondas that had cam wear issues around that time, Kawasakis had their own problems with a few models and the cams were likely made by the same manufacturer. 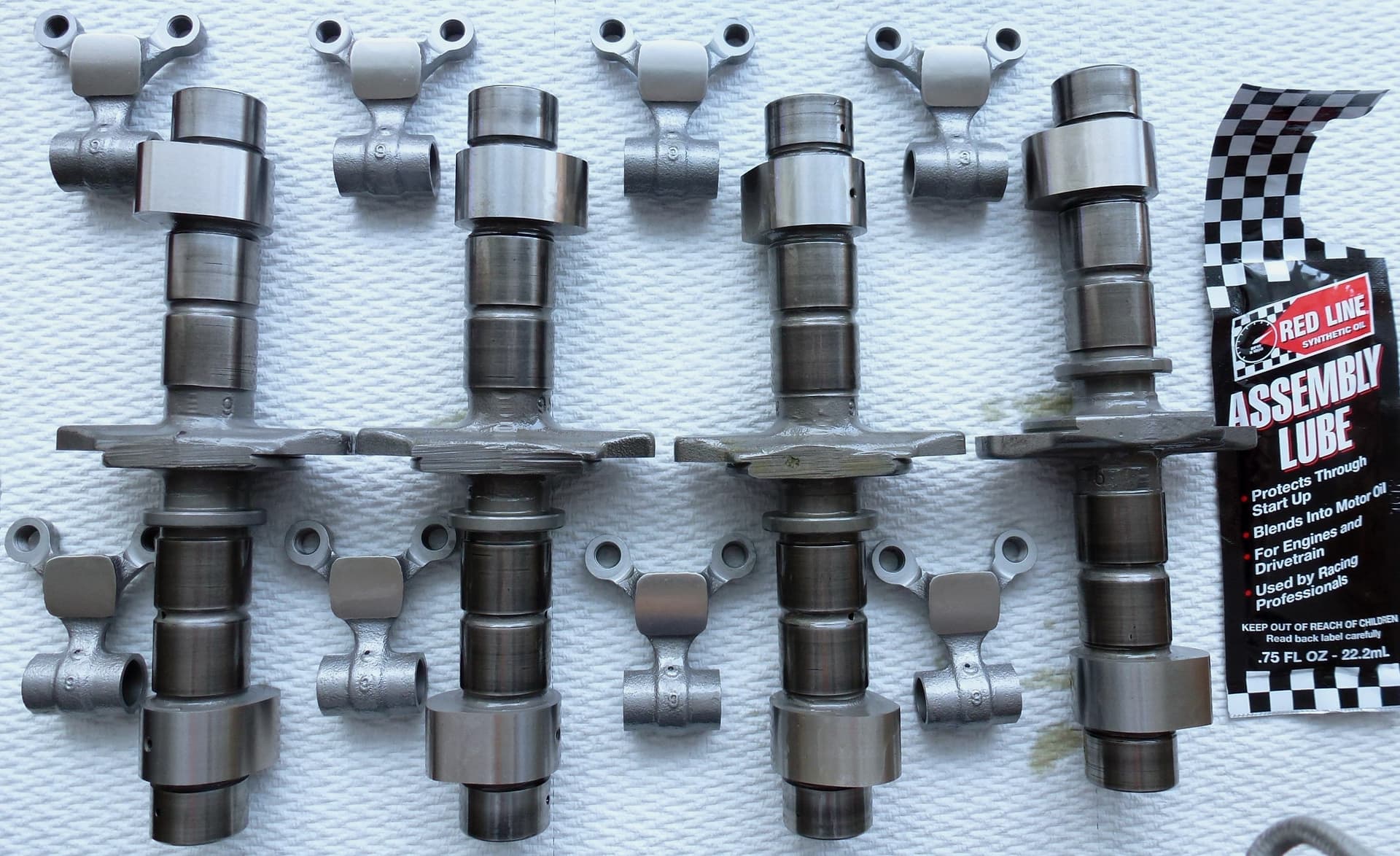 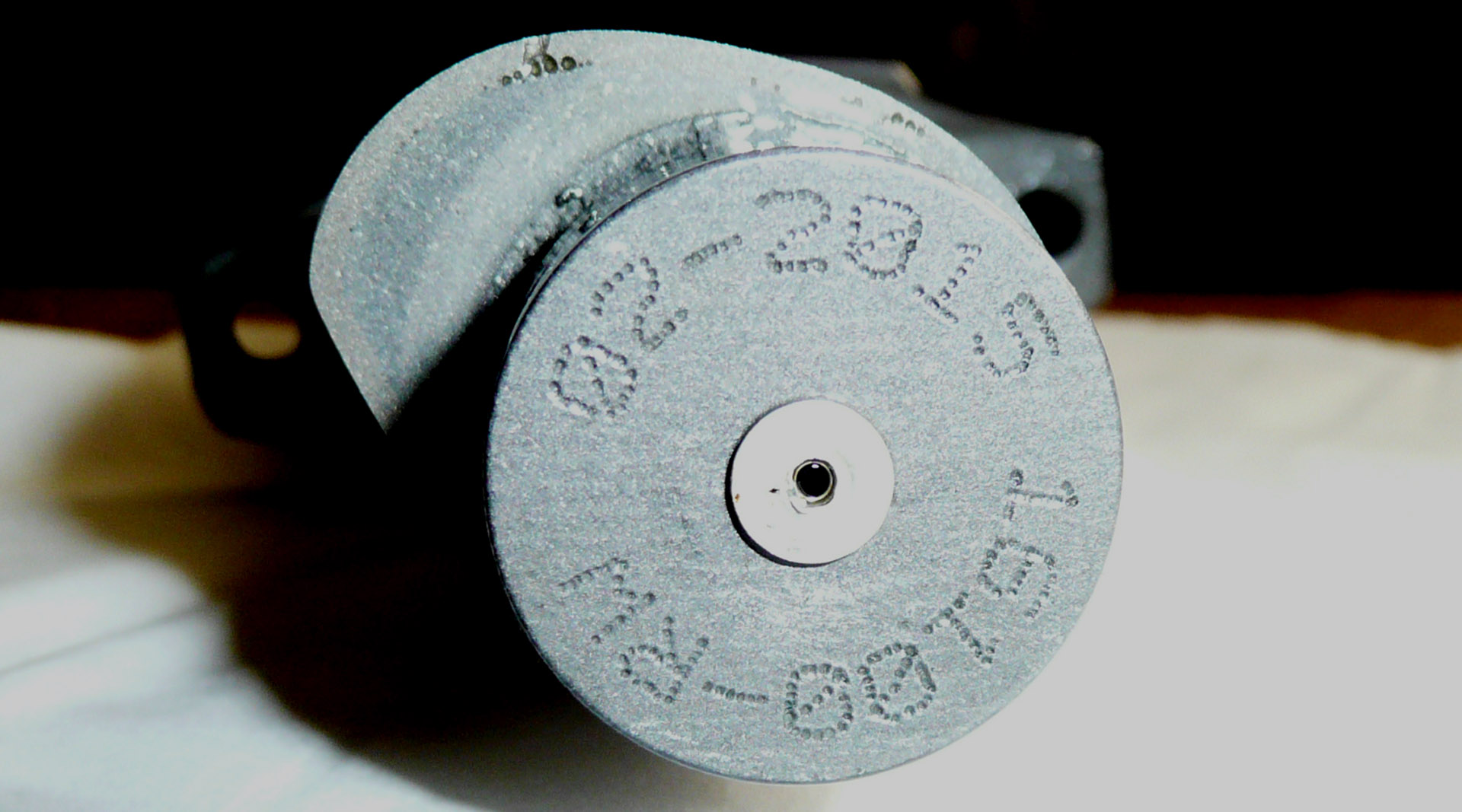 MegaCycle in California did my Cams.
They would not guarantee them unless they also did the Followers at the same time.
Found the worst cams and followers I had in the collection and sent those in.
Was pricey, but should be the last thing to wear in that motor.
Had the 161-00 Grind done (enhanced stock (more Lift, slightly more Dwell)).
Race1 & Race2 Grinds would require stronger springs.
Engine clatters a little on startup but purrs quiet when warm.
Even a carb Bench Sync has it idle real low (just for test).
Processing: CamTiming.xlsx…
Not sure if this spreadsheet will load,… I did a Degree Log of new & old cams.

I have never seen any indication of heat/burn damage on the bearings/journals or Cam Lobes.
I do Not believe these bikes have upper Oil Supply issues.

That’s the people I had. Good to know somebody recommends them.

Those cams and followers look really good by the way. bet you can’t wait to try em out. Only the racing bikes had oil supply issues because of cracked oil pipes apparently.

Did you ever get any traction on the idea to start a list of people / experts to use for different services / parts in different locations? This would be extremely helpful. I can find lots of parts with folks like David Silver, CMS, Wemoto, ebay etc but really struggling for skills and services (like engine work, strip and set up of carbs)….also rare parts (like suspension linkage bearings etc.)
Mine is a VF1000RE

Hi Bif, I am in the process of removing cams and followers to send off to Phil Joy for the repair. Do you think the additional work you had done (i.e. 20 thou base grind that gives 12 degrees more endurance and 20 thou more lift) would benefit my VF1000RE or would it change other setting parameters? I would like all the settings to be standard.
Thanks Neil

You will notice the difference but dynojetting the carbs to suit would be best
There is no dialling in of gear driven cams so they will go back in as standard.Peak lift will still be where it is as standard just a bit more.
Be ready to chase Phil,he does good work but at a(snails)pace.