Start of an R project

Gooday All,
Picked up the RE rolling chassis and motor that @Peterk had kept for me. Got a little time today to get it unloaded and check what it is like. It’s an 84 RE with no bodywork, and had been loosely fitted with CBR 1000F wheels and forks. It came with lots of bits in boxes, including some FF parts like seat, and instruments.
First step was to blow all the dust off. Checked spark plugs, looked like it had been running ok, whenever it had last run- guessing a long while ago. Good news, turning motor over it had good compression, and no horrible noises. It had nice clean green coolant still in motor, and oil looked ok also. Pulled cam covers, and from what I could see Turning motor over, cams look ok too!
So motor looks useable. Judging by wear on the foot pegs and other bits, the bike has had a hard life, and I think may have been crashed hard, judging by damage to the steering bump stops.
At this stage I’m not sure of direction to go. I was thinking of fitting FE bodywork, but probably easier to just fit the R motor into the FE parts bike I have here, and keep collecting bits to take it back to stock one day?
A bonus was finding it has a nice stainless 4 into 2 collector. I think this is a Tranzac brand made in Australia in Queensland. They are really light, and have great ground clearance. 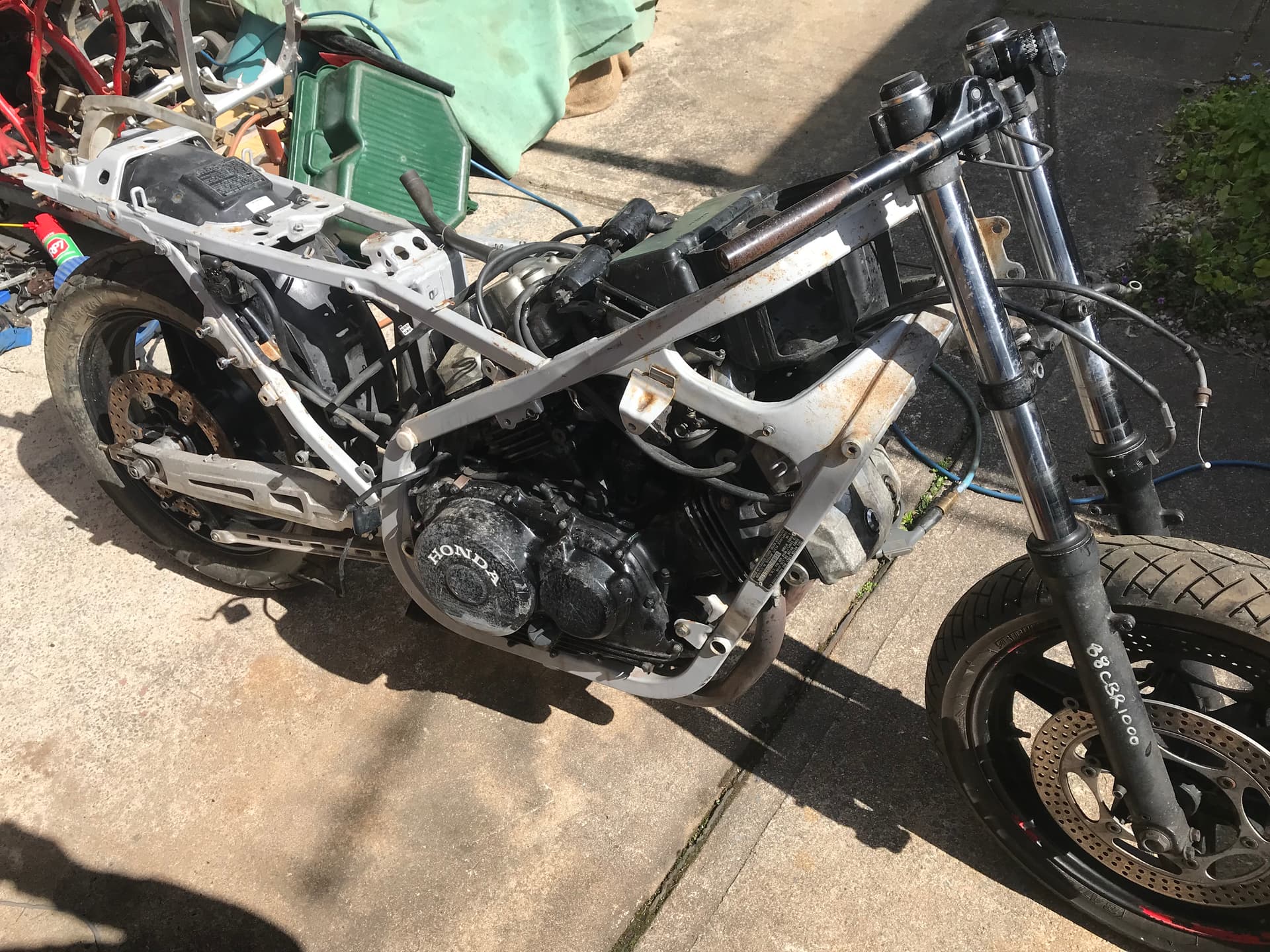 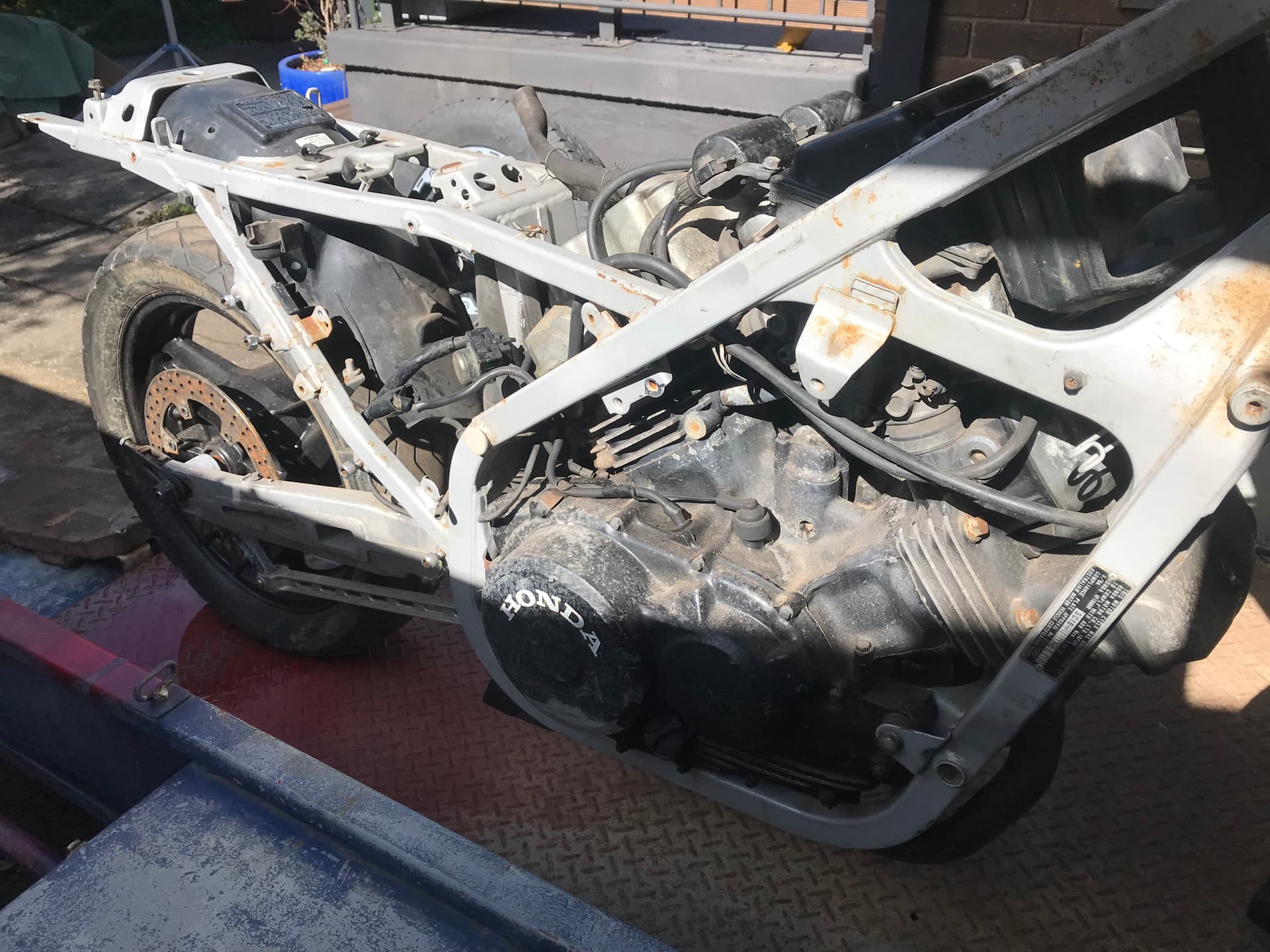 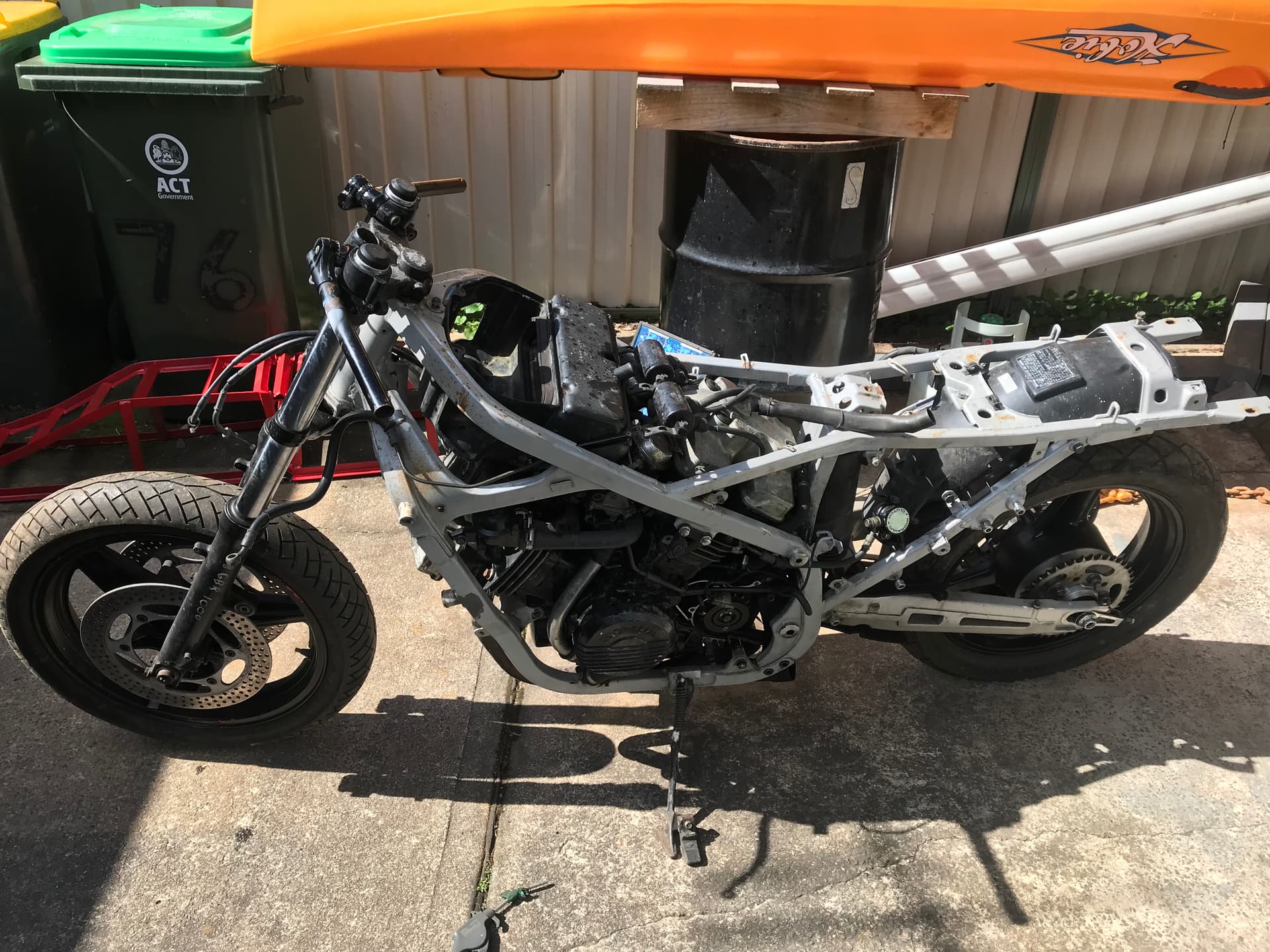 Let us know how you are getting on

Either way (with pictures please

Gooday Tuffy,
will keep the thread going. next step will be hanging enough bits back on, wiring loom and radiators etc, to be able to get the motor started. As it looks all right in the heads, and turns over ok, I might as well know it starts, and has good oil pressure.
If it starts and runs ok, will pull it out of the frame, and tidy the motor up externally.
cheers
Greg

Good luck in the project! Looking forward seeing the photos as you come along.

Progress today,
had some time, so threw wiring loom on, and connected everything I thought essential to starting/ignition circuits, with car battery and heavy leads. Took ages to work out the spare ignition switch was not making proper contact, so ended up shorting the back of the switch between the red and red and black.
Got good spark, and got it running briefly and sounded good. Oil light went out almost as soon as it started cranking. One carb started flooding badly, and rather than risk damaging the motor with hydraulic lock, I turned it off, and drained the oil. Next step will be get carbs working properly, connect full cooling system, get it running and nice and warm, and then compression test. Motor sounded very good without any rattles.
The frame is another story- I suspected it had been dropped hard at speed from bent clip on, and bent bump stops, but it looks like the rear subframe has been badly bent, and roughly straightened. The subframe from swing arm back had been repainted, but the mounting lugs for the rearsets and passenger pegs are still bent inwards, and not at 90 degrees to the frame.
When ‘hanging’ the wiring loosely off the frame I realised how much more complicated the R is than the Fs. More connectors at the back for the two tailights, but at the front another diode?, and more relays for the dual headlights. 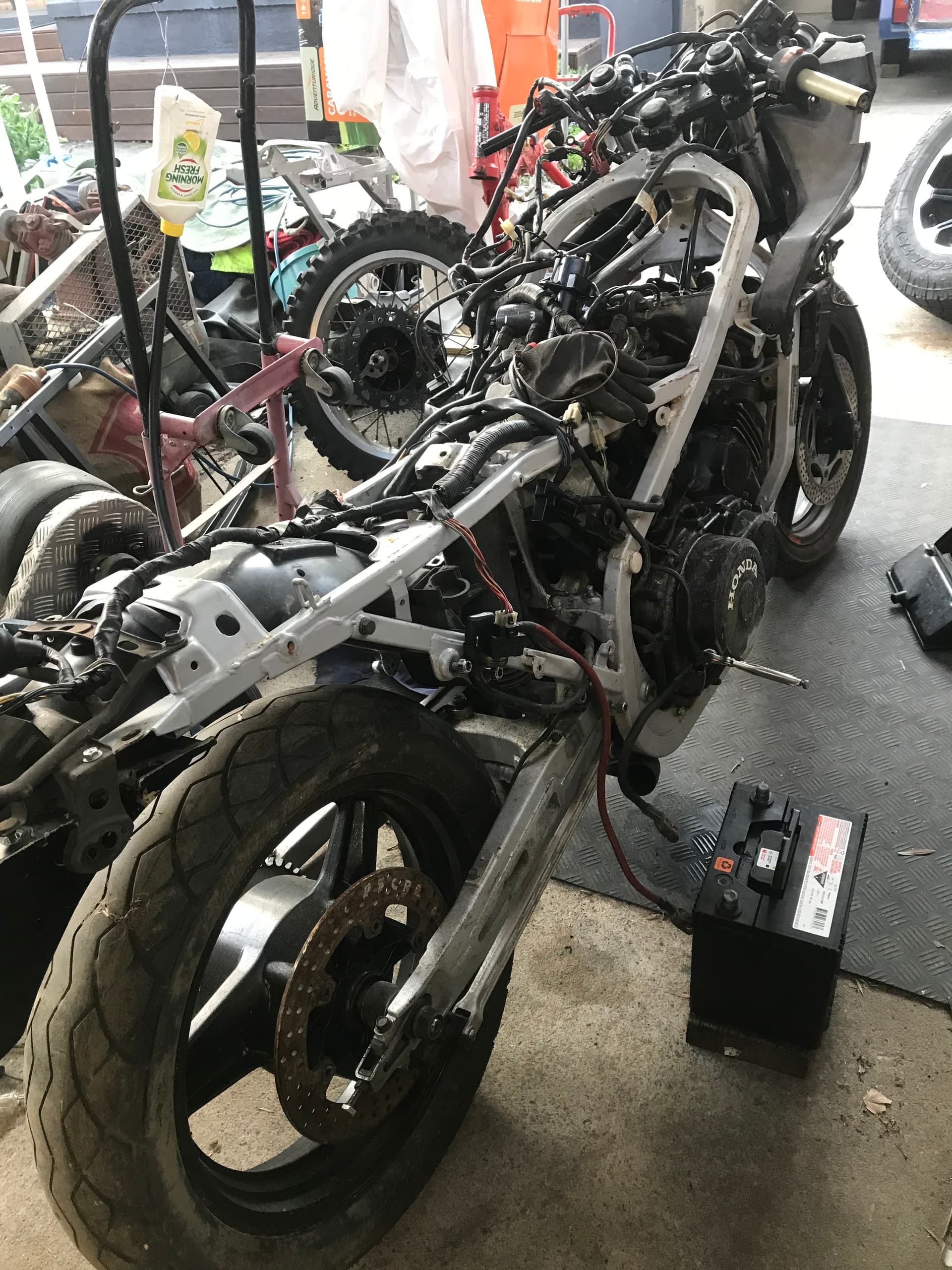 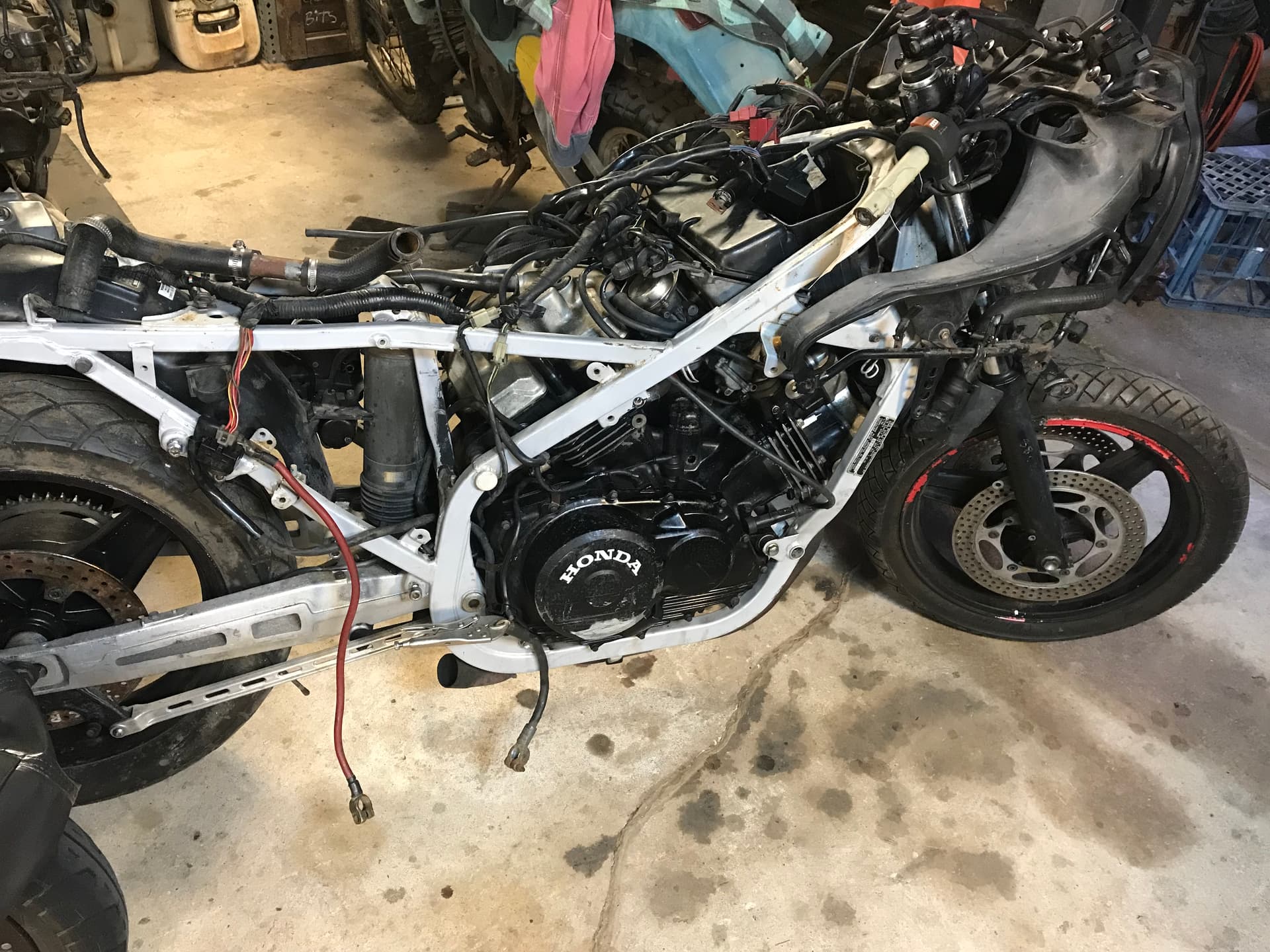 Have been fitting cooling system, but thought that I should pull the carbs off and check them over. The usual battle to get the carbs off due to hard rubbers. Carbs were in sad shape, full of diet and fine rust and a couple of main jets completely blocked, see pics. I had a good set of R carbs, clean and sound that I was going to fit, but decided to give this set an internal clean, and reinstall on the motor for now. Interesting that this set of carbs has 120 main jets front and back. My FE carbs have 140 front 145 rear, and my FFs have 160-165. 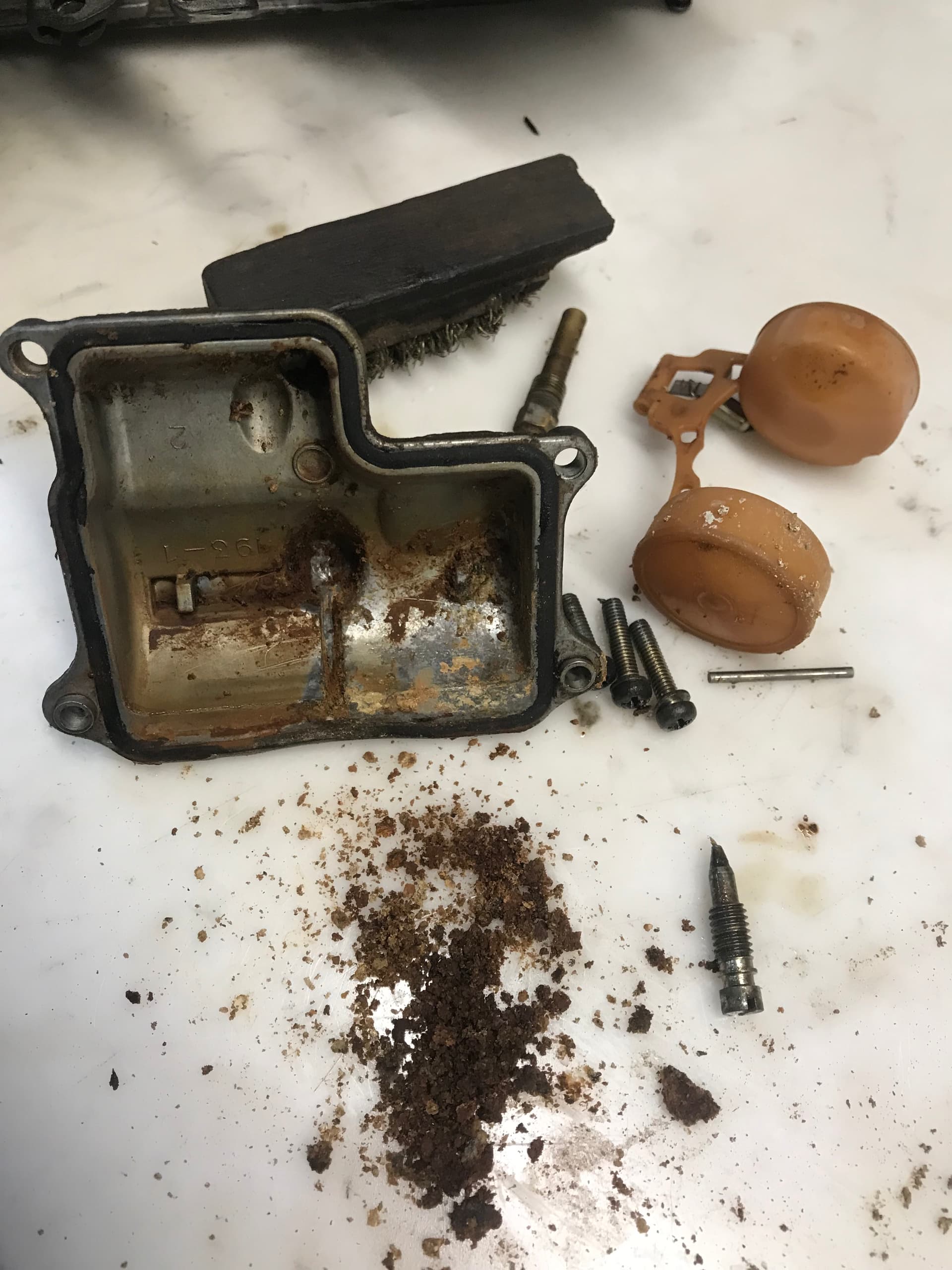 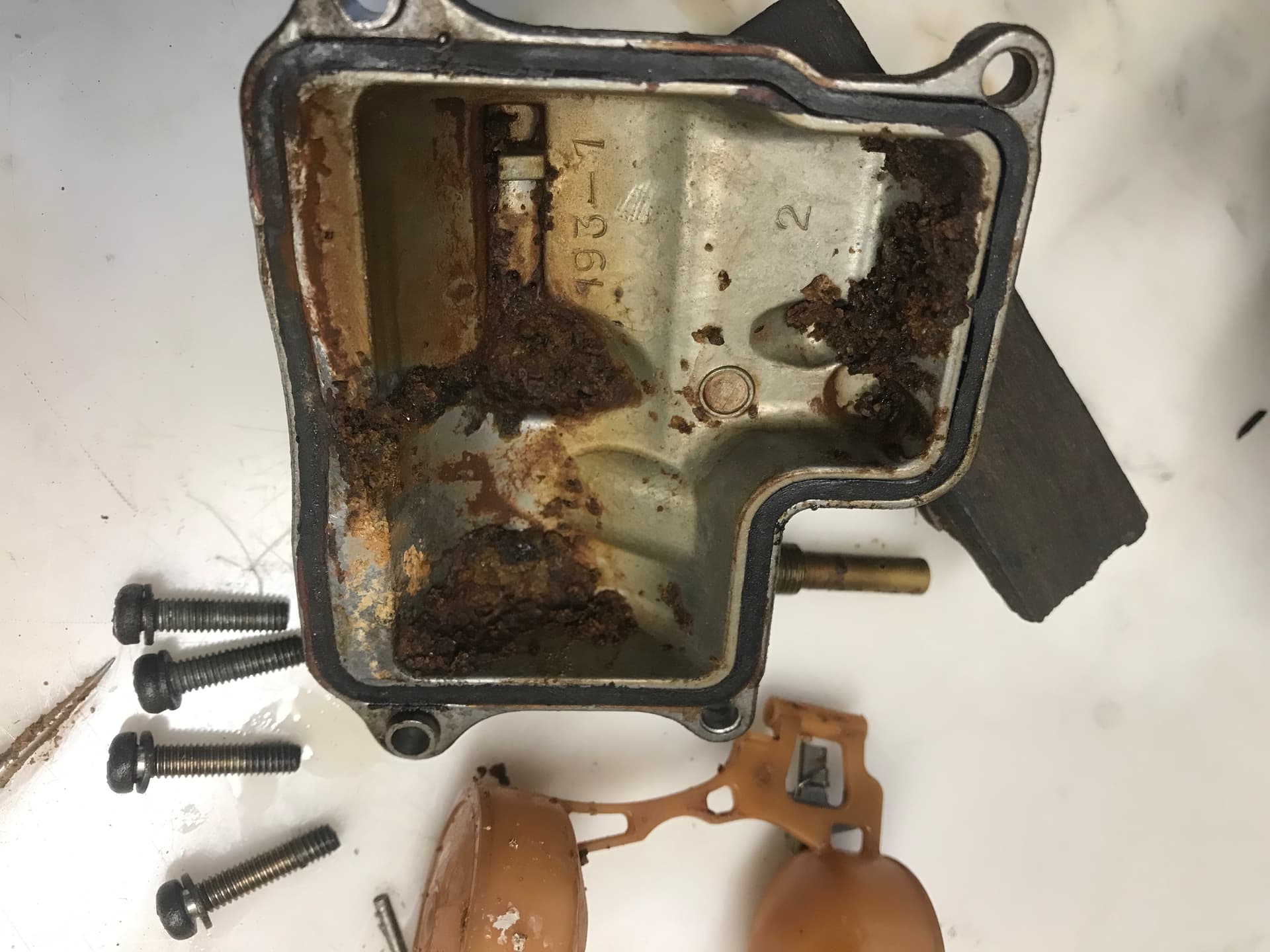 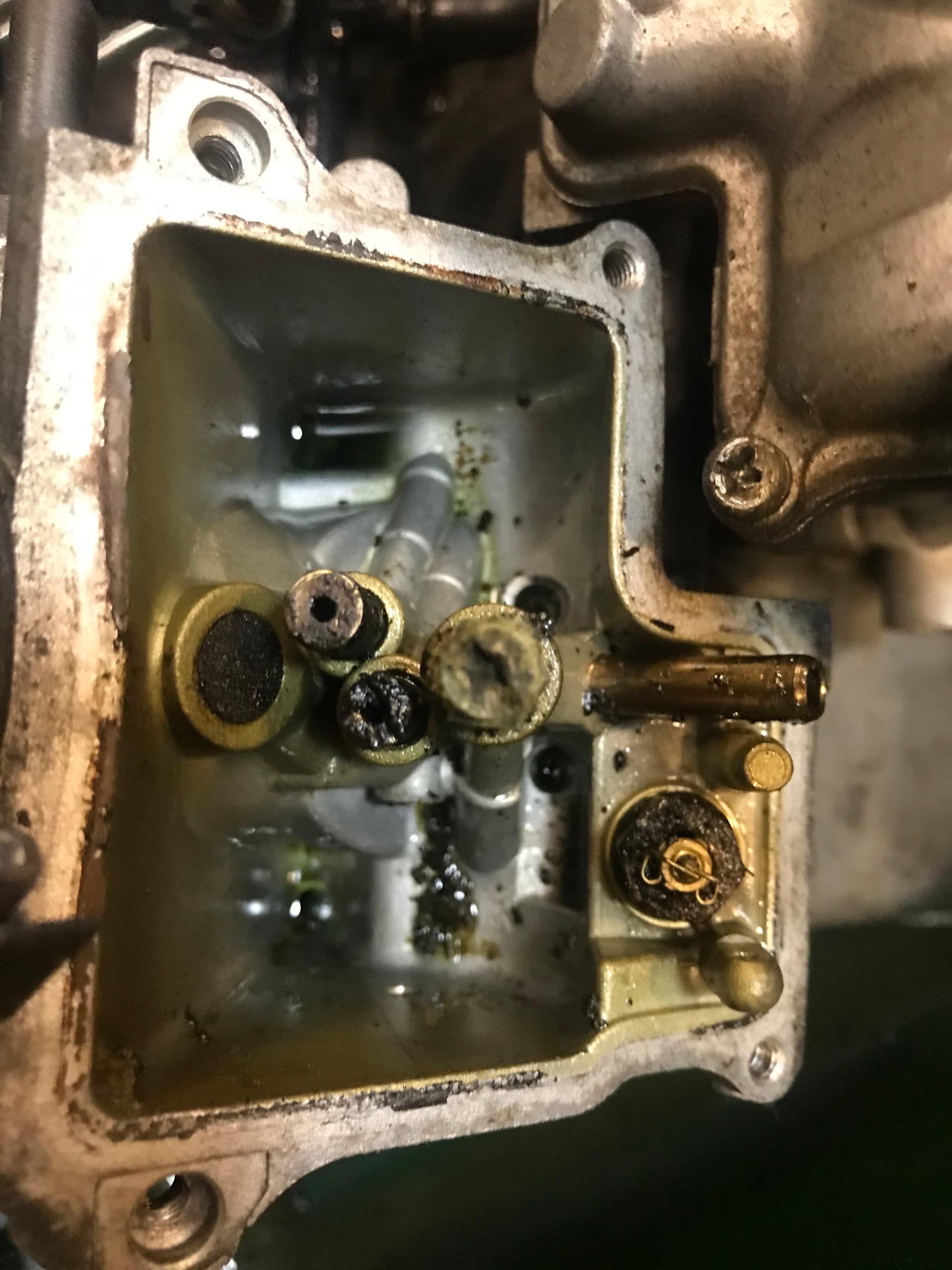 What kind of animals lived there???

Good to hear it started. Thats half the battle on these types of projects. LOL

The condition of those carbs are nasty.

Cleaned out the original set of carbs today. One carb in particular was really bad , looks like the dregs of fuel had drained into this carb with rusty watery sludge. The float needle was seized, and someone had tried to remove the pilot jet unsuccessfully, breaking the slot.See pic. 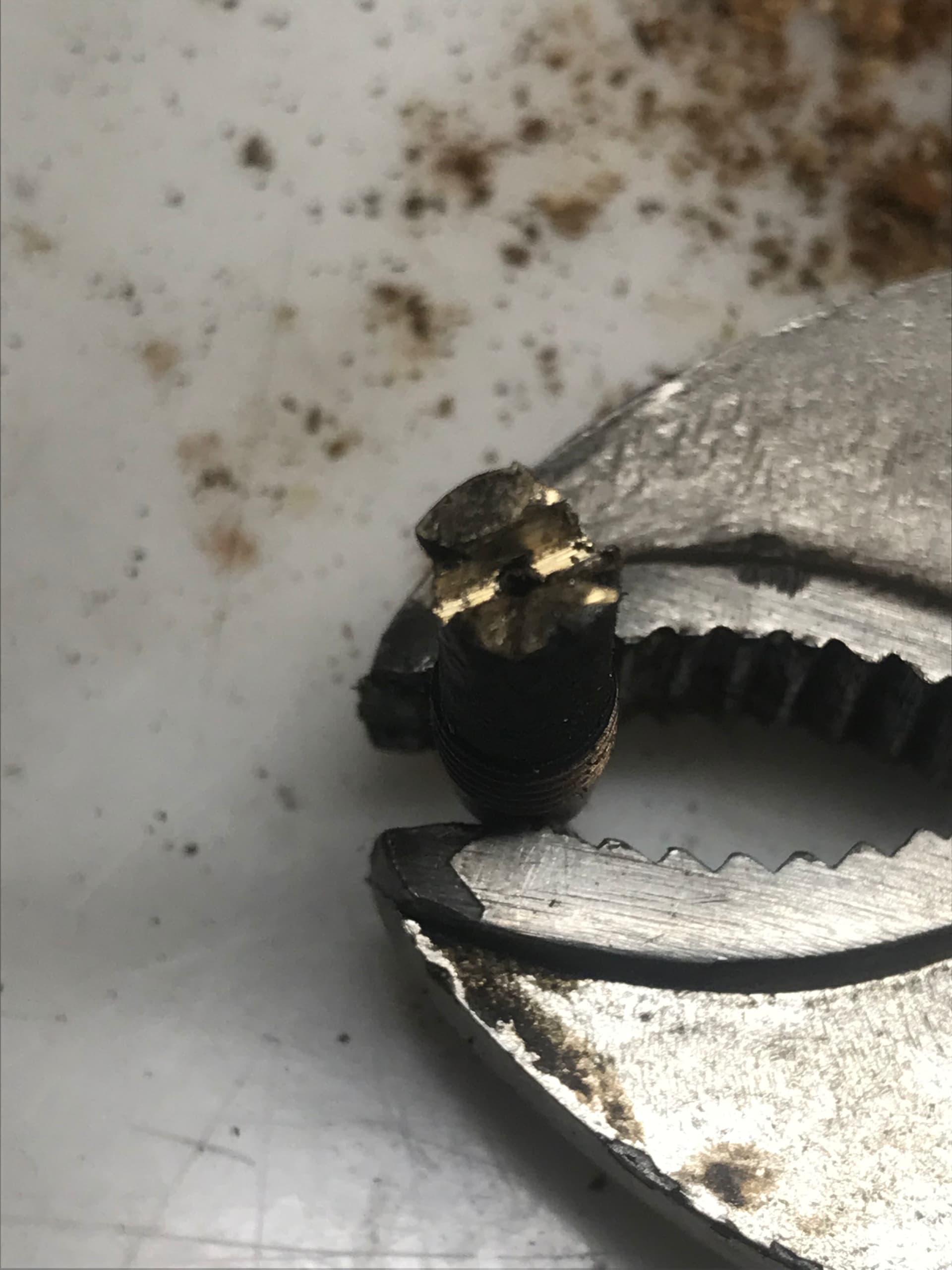 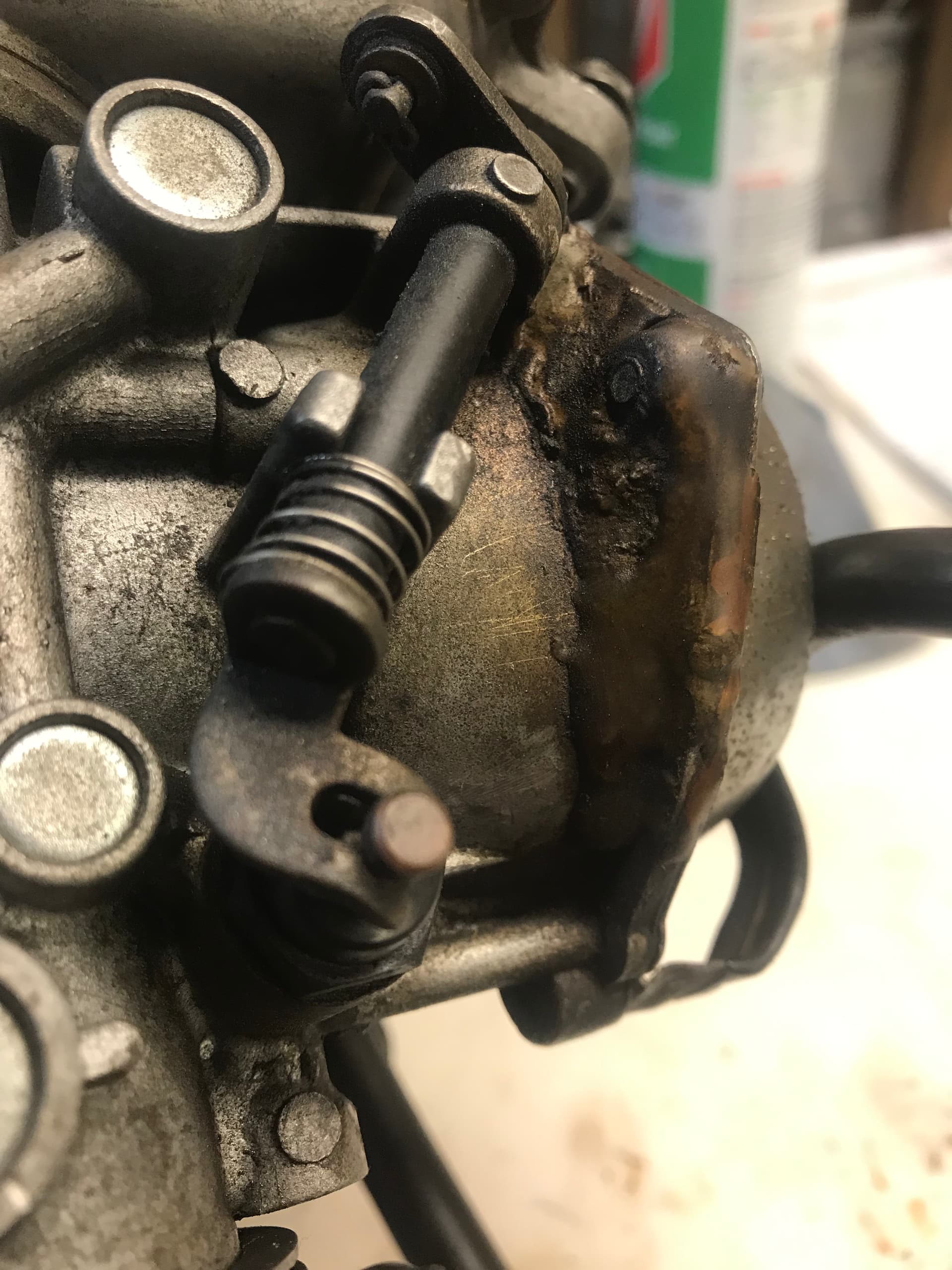 I had to cut another screwdriver slot with a Dremel, and then remove the butchered jet. Luckily had plenty of spare 38 pilot jets.
Refitted the carbs with used rubber boots, as I just want to run the motor properly and check it’s good.
One of the carb bodies had been butchered, and repaired with Araldite just under the where the diaphragm screws on. I’ve got a good spare body if I decide to use this set of carbs. Motor started up and ran fine, no nasty noises, revved well, looks like a good motor mechanically, cosmetically challenged! 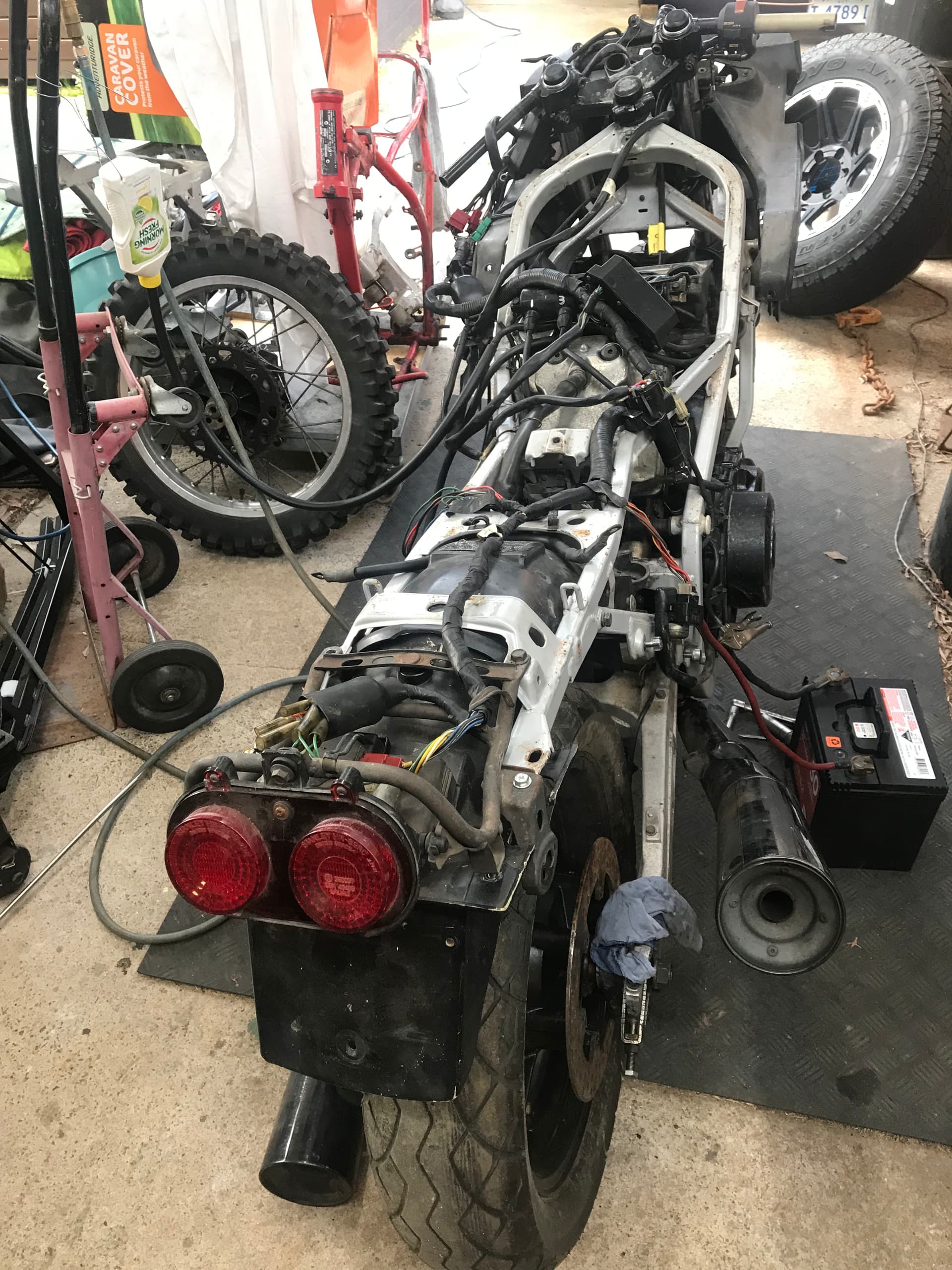 Thanks Faxe, this bike is an 84 RE- carbs it came with coded 83 AAWD, and I have a spare set that Bif has ID’d as 85-86 Canadian spec. I think that set is 82CAVKJ
Have got a great range of carbs, jets and spares now!!!